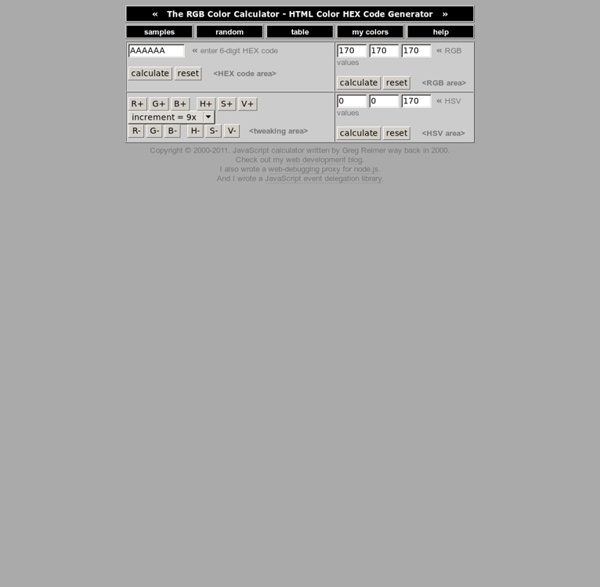 60 Useful Online Generators for Designers Today’s competitive market makes it necessary to stay updated in all the dimensions in designing industry and designers need all the latest software to be in the top. But purchasing software or downloading a huge one may not be in the top priority especially if it is going to be used only after a trial. In such cases online generators can be of great help which do the necessary job and some tools don’t have to be downloaded also. A lot goes in designing the backgrounds with different textures and patterns, choosing the right colors and a lot other factors. You may be interested in the following application related articles as well. Please feel free to join us and you are always welcome to share your thoughts even if you have more reference links that our readers may like. Don’t forget to and follow us on Twitter — for recent updates. Useful Online Generators for Designers 256 Pixels 80 x 15 brilliant Button Maker AJAX loading GIF generator AJAX Info Background Maker Background Patterns Badges

On Your Mark The music video follows two policemen who raid a religious cult and find an angelic being only to have her taken away and confined to a laboratory. Haunted by the fate of the "angel", the two men formulate a plan and break into the laboratory. Fleeing in an armored truck the three plummet into an abyss after trying to force past a police aircraft along a narrow suspended roadway. The music video was well-received and praised for its animation and attention to detail. Synopsis[edit] The video begins with shots of a vacant village, overgrown with weeds, and the concrete sarcophagus of a covered-over nuclear reactor in the background. The scene changes again, now to bright daylight and blue sky. The scene changes back to the discovery of the girl in the tower and the identity of the two men are revealed to be the same from the previous sequence. One of the men helps the girl up, she spreads her wings and gives them a grateful smile; he kisses her hand, and the other winks in farewell.

Fotor | Photo Editing Made Simple - Free Online Photo Editor sidewalk chalk guy sidewalk chalk guy «« back to gprime.net all material copyrighted by its original creator | Amazing 3-D chalk guy *** Please Note: This is not my work. I have had several emails asking me to make appearances at various events. I am not a chalk artist. Julian Beever is an English artist who's famous for his art on the pavements of England, France, Germany, USA, Australia and Belgium. Do you notice everything is fake??? Look Closely, you can see the Bricks through the Chalk on the Monitor Screen People are actually avoiding walking in the "hole" the image below has been taken to a wrong angle This is the same one viewed on the right angle... Remember his foot is really flat on the pavement with the other foot!? Make Poverty History drawing from the side (40 ft long) The following work is done by another artist. Great Crevase Edgar Mueller. The picture appeared on the East Pier in Dun Laoghaire , Ireland , as part of the town's Festival of World Cultures. He spent five days, working 12 hours a day, to create the 250 square metre image of the crevasse, which, viewed from the correct angle, appears to be 3D.

A Low Fi Lenticular On The Streets Of Berlin When people ask us… What kind of street art do you like the most? Our answer is “The kind that you see in the photos above” Simple. Fun. Interactive Photos nicked from here. Netflix Envelope Doodles Admit it, you've done it. You've taken a Sharpie to a Netflix envelope and doodled the heck out of it. Not just once, but a multitude of times. You've then imagined the expression of the postal worker as the envelope passed through their hands, all with a wide grin on your face. Here are some fun examples of people who publicly admit to doing just that. Above drawn by jovino. From around the web: Above by: jovino Above by: Kill Taupe Above by: {heart} Above by: Garrett Miller Above by: Hugo Seijas Above by: okat Above by: maddieb Above by: Scott Snowden Above by: Sherry Thurner Above by: Joe Justus Above by: Ryan Bucher Above by: Marsha Baker Above by: Audrey Coleman Above by: Lain 3 Above by: Saybel Guzman Above by: Jonathan Palmisano Above by: Julie Zarate We've received so much love for the Netflix post, that we've dedicated an entire mini-site to it.

Gabriel Moreno Gabriel Moreno does beautiful work with such basic materials: a pen and a brush. His illustrations begin in black and white, upon which Moreno builds, adding layers of color and images of other places and people tattooed into their skin. Flowers, birds, and faces organically expand from his subjects, as if a rush of creativity, or a dream, is escaping them. 8-Bit vs. Reality UK designer, Aled Lewis crosses the streams of reality and 8-bit with a fun new photographic series. Aled is best known for his clever t-shirt illustrations on Threadless, but his latest project superimposes your favorite pixelated video game characters of yesteryear with photographs of real life scenarios. via fubiz

"Our Bloodstained Roof" ShareThis Copy and Paste Sharpie Art - Extreme Sharpie Artwork at WomansDay Nowadays, Sharpie markers come in more than basic black––they’re available in every color of the rainbow, and in just about every size and shape. They’re great for everyday labeling and organizing, but did you know that they could also be used to decorate everything from guitars to fingernails? WD teamed with Sharpie to find the most unique creations from talented artists across the globe. From a Lamborghini turned objet d’art to a wall mural, check out how different artists uncapped their creativity. Rev Your Engines George Ramos spent two weeks on this intricately designed Lamborghini––he used Sharpie markers to create the design and then topped it off with a clear coat of paint to protect the pattern. Lend a Hand The talented (and patient!) Rock and Roll Peter Bragino created a custom design on his Ibanez guitar using an industrial-strength Sharpie marker––no sanding or topcoat was needed to preserve the long-lasting design. Space Out Detail Oriented Feet First Speed Racer Off the Wall