Flatland: A romance of many dimensions 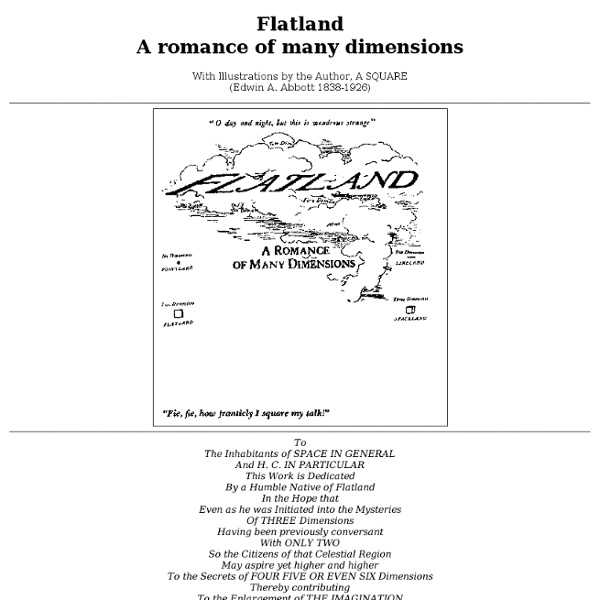 With Illustrations by the Author, A SQUARE (Edwin A. Abbott 1838-1926) To The Inhabitants of SPACE IN GENERAL And H. C. IN PARTICULAR This Work is Dedicated By a Humble Native of Flatland In the Hope that Even as he was Initiated into the Mysteries Of THREE Dimensions Having been previously conversant With ONLY TWO So the Citizens of that Celestial Region May aspire yet higher and higher To the Secrets of FOUR FIVE OR EVEN SIX Dimensions Thereby contributing To the Enlargement of THE IMAGINATION And the possible Development Of that most rare and excellent Gift of MODESTY Among the Superior Races Of SOLID HUMANITY The first objection is, that a Flatlander, seeing a Line, sees something that must be thick to the eye as well as long to the eye (otherwise it would not be visible, if it had not some thickness); and consequently he ought (it is argued) to acknowledge that his countrymen are not only long and broad, but also (though doubtless in a very slight degree) thick or high. 1. 13. 1.

Arthur C. Clarke - The Nine Billion Names of God “This is a slightly unusual request,” said Dr. Wagner, with what he hoped was commendable restraint. “As far as I know, it’s the first time anyone’s been asked to supply a Tibetan monastery with an Automatic Sequence Computer. I don’t wish to be inquisitive, but I should hardly have thought that your — ah — establishment had much use for such a machine. Could you explain just what you intend to do with it?” “Gladly,” replied the lama, readjusting his silk robes and carefully putting away the slide rule he had been using for currency conversions. Dimensions Home A film for a wide audience! Nine chapters, two hours of maths, that take you gradually up to the fourth dimension. Mathematical vertigo guaranteed!

The Smartest Mob: A Chapter from Existence The Smartest Mob A stand-alone excerpt from David Brin’s novel EXISTENCE by David Brin Copyright 2012 Tor Books Washington was like a geezer -- overweight and sagging -- but with attitude. Flatland, by E. A. Abbott, 1884 A Romance of Many DimensionsWith Illustrations by the Author, A SQUARE (1838-1926) "Fie, fie how franticly I square my talk!" Second, revised edition, 1884 Dedication To The Inhabitants of SPACE IN GENERAL And H.C. IN PARTICULAR This Work is Dedicated By a Humble Native of Flatland In the Hope that Even as he was Initiated into the Mysteries Of THREE Dimensions Having been previously conversant With ONLY TWO So the Citizens of that Celestial Region May aspire yet higher and higher To the Secrets of FOUR FIVE OR EVEN SIX Dimensions Thereby contributing To the Enlargment of THE IMAGINATION And the possible Development Of that most and excellent Gift of MODESTY Among the Superior Races Of SOLID HUMANITY A Note on the Text Copy-text for this HTML edition is the Princeton Science Library edition of Flatland, new material copyright 1991 by Princeton University Press, 41 William Street, Princeton, N.J. 08540, all rights reserved.

What would Earth's skies look like with Saturn's rings? Posted By Jason Davis Topics: pretty pictures, art Illustrator and author Ron Miller specializes in, among other things, incredible visualizations of other worlds. He has rendered the surface of Titan, peered into black holes for Discover magazine, and designed a Pluto stamp that is currently hurtling toward the far reaches of our solar system aboard the New Horizons spacecraft. Now, Miller brings his visualizations back to Earth for a series exploring what our skies would look like with Saturn’s majestic rings. 86, 87, 88, 89 by Genevieve Valentine THE HOMELAND ARCHIVE WELCOMES YOUYou are part of a vital effort to recover evidence of terrorist activity preceding the Raids, and on a larger scale, to preserve the heritage of a historic neighborhood of New York City.The Archive Division of the Greater New York Municipal Safety Authority has received a generous grant from Central to assist its efforts to catalog and analyze the remaining evidence.The next several weeks are a crucial window of recovery and classification. The first time I’d ever even been to any of those streets was the morning I reported to my scope leader, who was sitting behind a desk that looked like it had once belonged to a teacher, but there had been a couple of schools in the neighborhood and it was better not to think too much about it. When you applied to the Homeland Archive, they asked a lot of questions about how many questions you asked. There was a boxy, lumbering truck at the end of the line of tents, marked ELECTRIC. File 00088513. I was good at it.

Book review: “Palladio” by Jonathan Dee Those nice people at Constable & Robinson sent me a copy of Jonathan Dee’s early novel, “Palladio” to review (originally published in 2002 in the USA, it is being released in tandem with his new book “The Privileges”). A dual narrative occupies the first two thirds of the novel, following the affectless Molly Howe from a small-town adolescence and into an adult life that she treats as little more than an opportunity for increasingly fraught emotional experiments. The other strand of the narrative follows John Wheelwright, an ad-man in a successful New York company who feels creatively paralysed by his work, but who’s polite Southern upbringing won’t allow him to express his dissatisfaction either to his girlfriend Rebecca or his work partner Roman. By the end of this section we realise that we’ve not been reading two parallel narratives at all, but rather two stories that start off ten years apart, and that slowly converge. Like this: Like Loading...