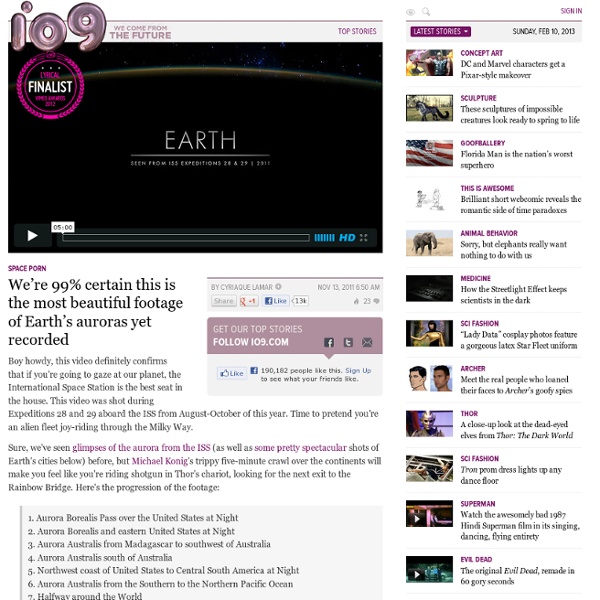 Boy howdy, this video definitely confirms that if you're going to gaze at our planet, the International Space Station is the best seat in the house. This video was shot during Expeditions 28 and 29 aboard the ISS from August-October of this year. Time to pretend you're an alien fleet joy-riding through the Milky Way. Sure, we've seen glimpses of the aurora from the ISS (as well as some pretty spectacular shots of Earth's cities below) before, but Michael Konig's trippy five-minute crawl over the continents will make you feel like you're riding shotgun in Thor's chariot, looking for the next exit to the Rainbow Bridge. Here's the progression of the footage: 1.

Amazing Underwater River : Cenote Angelita in Mexico Underwater River in Mexico If you are a professional diver you should visit Cenote Angelita Mexico. These amazing pictures were taken by Anatoly Beloshchin in the cave Cenote Angelita, Scientists Find Evidence for “Great Lake” on Europa and Potential New Habitat for Life Europa's "Great Lake." Researchers predict many more such lakes are scattered throughout the moon's icy shell. Credit: Britney Schmidt/Dead Pixel VFX/Univ. of Texas at Austin. Watch animation of how lakes form inside Europa’s icy shell.

Davidope’s mesmerizing animations Davidope is creative director and founder of Volll studio, based in Budapest. Besides that he has a tumblr where he show off some cool stuff he find online and AWESOME animated gifs he make. Black and white ipnotizing machines, optical illusions with 3D depth. You’ll get stunned. Isle Royale National Park - Large format photography - US National Parks Large Format stock photos, fine art prints by QTL [CLICK on any picture to see a larger image and details, to add to selection, to order, and to download wallpaper.] Albino Animals Birdwatchers are rushing to Avebury, near Marlborough, Wiltshire to hopefully catch a glimpse of a rare albino jackdaw. Author Andrew Collins was the first to photograph the bird which locals have named Jackie. Other fabulous albino animals include:

10 Most Fascinating Holes on Earth Great Blue Hole (Belize) Located in Belize's Barrier Reef Reserve System, the "Great Blue Hole" is about 60 miles away from Belize City and is believed to be the world's largest sea-hole. It's 125 meters deep and 300 meters wide. It was created as a cause of sea level increase about 65,000 years ago. logy Magazine An odd, previously unseen landform could provide a window into the geological history of Mars, according to new research by University of Washington geologists. Understanding Mars' geological history can provide many clues about the potential for past life on the red planet. They call the structures periodic bedrock ridges (and they use the abbreviation PBRs to evoke a favorite brand of beer). The ridges look like sand dunes but, rather than being made from material piled up by the wind, the scientists say the ridges actually form from wind erosion of bedrock. "These bedforms look for all the world like sand dunes but they are carved into hard rock by wind," said David Montgomery, a UW professor of Earth and space sciences.

Yosemite, California: Photos & Trip Report - StumbleUpon » yosemite Half Dome from Olmsted Point. Bridal Veil Falls. 11 cheap gifts guaranteed to impress science geeks Science comes up with a lot of awesome stuff, and you don't need a Ph.D, a secret lab, or government funding to get your hands on some of the coolest discoveries. We've got a list of 11 mostly affordable gifts that are guaranteed to blow your mind, whether or not you're a science geek. Click on any image to see it enlarged. 1. Aerogel