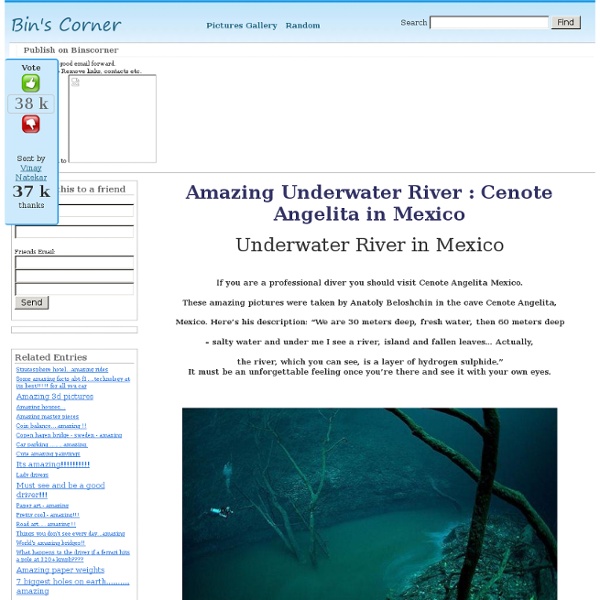 Underwater River in Mexico If you are a professional diver you should visit Cenote Angelita Mexico. These amazing pictures were taken by Anatoly Beloshchin in the cave Cenote Angelita, Mexico. Here’s his description: “We are 30 meters deep, fresh water, then 60 meters deep – salty water and under me I see a river, island and fallen leaves… Actually, the river, which you can see, is a layer of hydrogen sulphide.”

Kayaking the Thumb Kayaking the Thumb Kayaking the Thumb, Port Austin, Michigan: Photos & Trip Report (2009) And thanks to Nila Repard here is a photo from the very same island, taken by her great grandmother in 1934. And here is another photo, taken in the winter. (Source) What would happen if I drilled a tunnel through the center of th" Want to really get away from it all? The farthest you can travel from home (and still remain on Earth) is about 7,900 miles (12,700 kilometers) straight down, but you'll have to journey the long way round to get there: 12,450 miles (20,036 kilometers) over land and sea. Why not take a shortcut, straight down?

10 Most Fascinating Holes on Earth Great Blue Hole (Belize) Located in Belize's Barrier Reef Reserve System, the "Great Blue Hole" is about 60 miles away from Belize City and is believed to be the world's largest sea-hole. It's 125 meters deep and 300 meters wide. It was created as a cause of sea level increase about 65,000 years ago. Crystal River - The most beautiful river on earth [Pics] Cano Cristales - Crystal River. River of five colors, as the locals call it, originates in the south of the mountain chain Macarena, Colombia, and flows eastward to its confluence with the Guayabero river. In the Cano Cristales found five colors: yellow, blue, green, black and red. All of them are waste product of many algae and, depending on time of year, color saturation, or weakened or strengthened. Share on Tumblr

Human World Human World The women of the Tiwi tribe in the South Pacific are married at birth. When Albert Einstein died, his final words died with him. The nurse at his side didn't understand German. St Patrick, the patron saint of Ireland, was not Irish. The lance ceased to be an official battle weapon in the British Army in 1927.

Survival Equipment and Supplies List of "extremely desirable items" in the event of nearly any disaster. ~ Details Variations on a singular, fully-kitted-out wearable go bag. Without borders... The 100 most beautiful places in the world The 100 most beautiful places in the world (click a screenshot to enlarge it) - 1 - The inca city of Machu Picchu country : Peru place : near Cuzco - 2 - The Iguazu waterfalls country : Argentina - Brazil place : borders between the two countries - 3 - The Tadj Mahall country : India place : Agra, south-west of Delhi - 4 - The pyramids and the sphinx country : Egypt place : Giseh, south-west of Cairo - 5 - The great canyon of Colorado country : United States of America place : south-west of the country, Arizona state

wow Now just up a few steps. (They are on the left in the picture) Gets a little steeper here - so put your toes in the holes. A few more steps to go. Eighth wonder of the world? The stunning temples secretly carved out below ground by 'paranormal' eccentric Nestling in the foothills of the Alps in northern Italy, 30 miles from the ancient city of Turin, lies the valley of Valchiusella. Peppered with medieval villages, the hillside scenery is certainly picturesque. But it is deep underground, buried into the ancient rock, that the region's greatest wonders are concealed.