How to make a bamboo polytunnel 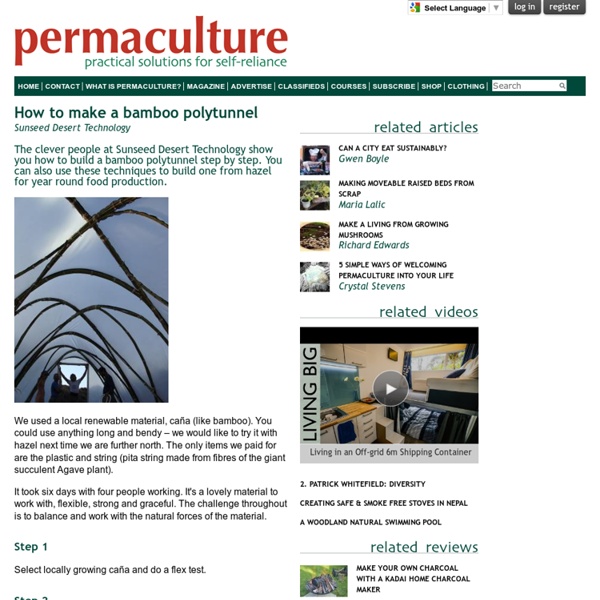 We used a local renewable material, caña (like bamboo). You could use anything long and bendy – we would like to try it with hazel next time we are further north. The only items we paid for are the plastic and string (pita string made from fibres of the giant succulent Agave plant). It took six days with four people working. Step 1 Select locally growing caña and do a flex test. Step 2 Strip the outer leaves and bumpy nodules from the canes. Step 3 Bundle into a column of 7 canes tying with string at 25cm intervals. Step 4 Join one column to another to form a super column. Step 5 Dig holes to place feet of arches into. Step 6 Create smaller columns of 3 canes to act as supports between main arches Step 7 Protect plastic by covering outside edge of all canes with fabric or folded netting/fleece. Step 8 Roll plastic over the structure. Step 9 Fit doors (we reused glass doors from a skip). Step 10 Grow plants all year round. Useful resource How to buy, site and erect a polytunnel Creating a community polypod Related:  Permaculture

Education - Core Concepts | Biological Cultivation | Advancing Eco-Agriculture 1. Healthy Plants Resist Insects and Disease We understand that animals and people have an immune system that is our natural defense against pathogens. For our immune system to function properly and fulfill its purpose, it needs to be supported with the proper nutrition. If nutritional elements are lacking, or not properly balanced, the immune system’s ability to perform is compromised. This same concept holds true for plants. 2. For plants to reach an optimum level of health and immunity, they need to have a fully active enzyme system to continuously process and create higher-order compounds. 3. The ultimate level of plant nutrition is when plants can absorb the majority of their nutritional requirements as microbial metabolites. 4. Regenerative models of agronomy and plant nutrition focus on improving quality and plant health, rather than increasing yields. 5. There is a common understanding that healthy soils create healthy plants. AEA's 20 Core Concepts pdf.

Mastering The Five Fears: finding freedom in the human condition | The Art of Audacity Devil be gone When there is no enemy within, the enemies outside cannot hurt you.African Proverb You, dear reader, are one of the lucky ones. Of all the untold billions of intrepid souls who have trod this ancient Earth, you are among the most privileged. You enjoy social, economic and political liberties the likes of which your ancestors would not have dared dream. You have the freedom to travel wherever you wish. You have wealth too, sufficient to realise any vision you can imagine no matter how fantastic or grand. And the means for their attainment exists as well. How the kings of old would have envied your privileged position. You live in an age where the blind can be given sight, the deaf can be taught to hear, and the maimed can be given new limbs. In over ten thousand years of human civilisation there has never, existed a better time to be alive… then right now. You have all you need and much more besides. You are as free as anyone who has ever set foot upon this Earth. Why am I here?

soils majority come from weathered rock, approximately a 1/2 come from water and air, and a small portion ( less than 10%) from humus, decomposing but not decomposed organic material. Minerals derived from the soil must be dissolved in water. Otherwise the plant will not be able to obtain them. How does soil structure impact on nutrient availability? Soils are characterized by the particles which make up their texture; they may be described as clayey ( common enough in CC, or sandy ( on the eastern shore) or more ideally as loamy. Particles: Additionally, the age of the soil influences its organization. How do plants obtain the nutrients in the soil? CEC is important for maintaining adequate quantities of plant available calcium (Ca2+), magnesium (Mg2+) and potassium (K+) in soils.

A Spiraling Eye-Encrusted Overview of the Art of Alex Grey (Part 1) Introduction On the morning I started writing this, a five-year-old named Caleb happened to be visiting the house and interrupted my writing session to tell me (and this is an exact quote): "Jonathan, I see ghosty things other people don't see." I was tempted to reply: "That's interesting because I just started writing about a grown-up named Alex Grey who also sees ghosty things other people don't see." Instead, I asked Caleb to describe one of the ghosty things, and he said he saw a cupcake with a "skeleton head" in it. In fact, Alex Grey can paint unseen, ghosty things to a degree of potency that can only be compared to a Thor-hammer blow to the head while your body is being strafed by DMT-coated diamond bullets. For less than seventy dollars you can own all three of Alex's monographs -- Sacred Mirrors, Transfigurations and the just published Net of Being. When Terence McKenna was asked what we should do given the dire state of the world, he replied: "Push the art pedal to the metal."

EcoGEM Gypsum and how it corrects aluminum toxicity in the subsoil - EcoGEM Gypsum and how it corrects aluminum toxicity in the subsoil How does calcium remediate pH problems associated with an acid subsoil? Soils can be acid or alkaline. Acid soils occur where there has been a lot of rainfall over the centuries and soils are highly weathered and many minerals and bases have been leached. Alkaline soils develop in arid areas that lack rainfall. Plant growth comparison: Aluminum vs. Growers apply lime to neutralize or raise pH and generally apply enough lime to raise pH to 6.2 to 6.5 for a period of 4 years and then reapply. If acid neutralization is the goal, then lime is the material of choice to neutralize acid subsoils. In acid subsoils, soluble aluminum is toxic to plant roots and causes root pruning. Global Aluminum Toxicity in Soil Gypsum is calcium sulfate and lime is calcium carbonate. Dr.

Soil Aluminum and Test Interpretation Aluminum is not an essential element for either plants or animals. Most plant producers have heard that too much aluminum (Al) can be harmful to plants. However, many may not be aware that there are multiple forms of Al in the soil and most of them are not directly harmful to plants. There are also multiple methods of testing the soil for these various forms of Al and several different ways to use these soil test results. Aluminum is the most abundant metal in the earth's crust. Forms of Aluminum in Testing As mentioned earlier, there are multiple forms of Al in the soil and multiple tests that have been used to identify these different forms. 1. 2. Aluminum Toxicity Excess soluble/available aluminum (Al+++) is toxic to plants and causes multiple other problems. • Direct toxicity, primarily seen as stunted roots • Reduces the availability of phosphorus (P), through the formation of Al-P compounds • Reduces the availability of sulfur (S), through the formation of Al-S compounds • The soil pH