Alex Reece Discography at Discogs. Elastica. History[edit] After playing more shows and demoing new material in the first half of 1996, Elastica entered the studio in the later part of the year to begin work on their second album. 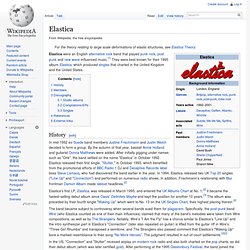 By late 1998 Matthews had left the band. She was replaced by guitarist Paul Jones and keyboardist Sharon Mew. Also around this time Chipperfield was replaced with a returning Annie Holland.[2] As a tribute to the "lost years" of the band, a self-titled six-track EP appeared in August 1999, collecting a variety of recordings from a multitude of aborted sessions. 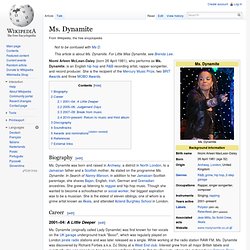 Dynamite, is an English hip hop and R&B recording artist, rapper-songwriter, and record producer. She is the recipient of the Mercury Music Prize, two BRIT Awards and three MOBO Awards. Sex Gang Children. History[edit] Following McLeay's departure in 1984, the band was renamed Andi Sex Gang & the Quick Gas Gang for the 1985 Blind! 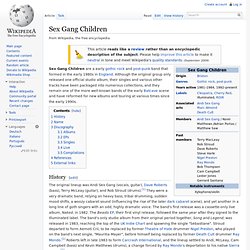 Album and tour (McLeay did not leave until after that album's recording, however), but split afterwards. Renewed interest in the band in the United States led to a reformation in 1991, and a new album, Medea, in 1993.[1] As a solo artist Andi went on to make a number of well-received albums for various labels. 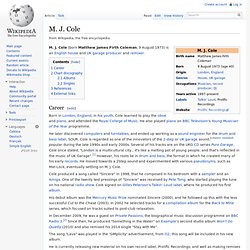 J. Cole (born Matthew James Firth Coleman, 9 August 1973) is an English house and UK garage producer and remixer. Career[edit] Born in London, England, in his youth, Cole learned to play the oboe and piano, and attended the Royal College of Music. He also played piano on BBC Television's Young Musician of the Year programme. He later discovered computers and turntables, and ended up working as a sound engineer for the drum and bass label, SOUR.

His debut album was the Mercury Music Prize nominated Sincere (2000), and he followed up this with the less successful Cut to the Chase (2003). He is currently releasing new material on his own record label, Prolific Recordings, and well as making remixes for various artists like Lana Del Rey, Wretch 32, and Above & Beyond. Chart discography[edit] MJ Cole - Sincere - Original (UK Garage) MJ Cole. M J COLE. MJ Cole’s stream. Soul Jazz Records. Official Website of High Focus Records. Dead Players. The Dead Players are many things. 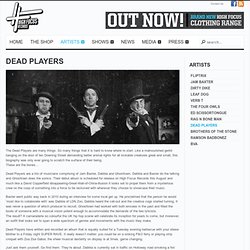 So many things that it is hard to know where to start. Like a malnourished gerbil banging on the door of ten Downing Street demanding better animal rights for all kickable creatures great and small, this biography was only ever going to scratch the surface of their being. These are the bones… Dead Players are a trio of musicians comprising of Jam Baxter, Dabbla and Ghosttown. Dabbla and Baxter do the talking and Ghosttown does the sonics.

Baxter went public way back in 2010 during an interview for some local get up. Dead Players have written and recorded an album that is equally suited for a Tuesday evening barbecue with your obese Mother to a Friday night SUPER RAVE. Just ask them yourself. The Mighty Boosh to re-form for new tour and 'psychedelic' movie. Back on the road … The Mighty Boosh on stage in 2008. 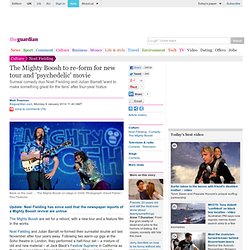 Photograph: David Fisher / Rex Features The Mighty Boosh are set for a reboot, with a new tour and a feature film in the works. At the time, the pair made no commitments to anything more permanent. However, Fielding has told the Mail on Sunday: "We're going on tour early in the New Year. " They last toured together in 2009, with their Future Sailors show, which came two years after their final series for the BBC. Barratt, who has appeared on stage at the Young Vic and the Royal Court in the last two years, added: "We'll be working on material that hopefully could make a movie.

The pair have written two film scripts in the past, though neither made it to production. In 2008, Fielding told XFM: "A film is the first thing we ever wanted to do, so we've always come up with ideas and stuck them in a drawer.