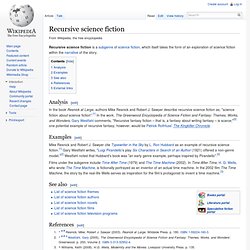 Analysis[edit] In the book Resnick at Large, authors Mike Resnick and Robert J. Sawyer describe recursive science fiction as, "science fiction about science fiction".[1] In the work, The Greenwood Encyclopedia of Science Fiction and Fantasy: Themes, Works, and Wonders, Gary Westfahl comments, "Recursive fantasy fiction – that is, a fantasy about writing fantasy – is scarce;"[2] one potential example of recursive fantasy, however, would be Patrick Rothfuss' The Kingkiller Chronicle. Examples[edit] Mike Resnick and Robert J. See also[edit] References[edit] External links[edit] Stephen Hunt (author) Stephen Hunt is a writer best known for a series of fantasy novels with steampunk elements known as the Jackelian series, whose central setting is a nation somewhat resembling Victorian England named the Kingdom of Jackals. 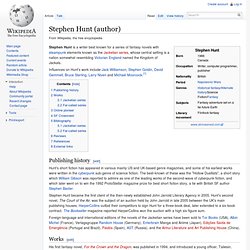 Influences on Hunt's work include Jack Williamson, Stephen Goldin, David Gemmell, Bruce Sterling, Larry Niven and Michael Moorcock.[1] Hunt's short fiction has appeared in various mainly US and UK-based genre magazines, and some of his earliest works were written in the cyberpunk sub-genre of science fiction. Steampunk (comics) The series debuted in 2000 and ran for 12 issues, a prologue and a preview comic called Steampunk Catechism. 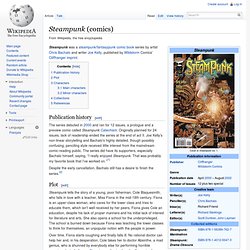 Originally planned for 24 issues, lack of readership ended the series at the end of act II. Joe Kelly's non-linear storytelling and Bachalo's highly detailed, though possibly confusing, penciling style received little interest from the mainstream comic-reading public. The series did have its supporters, especially Bachalo himself, saying, “I really enjoyed Steampunk. That was probably my favorite book that I’ve worked on.”[1] List of steampunk works. Steampunk is a subgenre of fantasy and speculative fiction that came into prominence in the 1980s and early 1990s. 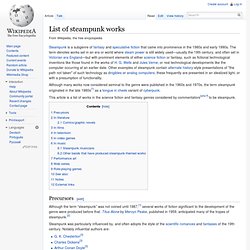 The term denotes works set in an era or world where steam power is still widely used—usually the 19th century, and often set in Victorian era England—but with prominent elements of either science fiction or fantasy, such as fictional technological inventions like those found in the works of H. G. Wells and Jules Verne, or real technological developments like the computer occurring at an earlier date. Other examples of steampunk contain alternate history-style presentations of "the path not taken" of such technology as dirigibles or analog computers; these frequently are presented in an idealized light, or with a presumption of functionality. Steampunk. "Maison tournante aérienne" (aerial rotating house) by Albert Robida for his book Le Vingtième Siècle, a 19th-century conception of life in the 20th century Steampunk also refers to any of the artistic styles, clothing fashions, or subcultures, that have developed from the aesthetics of steampunk fiction, Victorian-era fiction, art nouveau design, and films from the mid-20th century.[3] Various modern utilitarian objects have been modded by individual artisans into a pseudo-Victorian mechanical "steampunk" style, and a number of visual and musical artists have been described as steampunk. 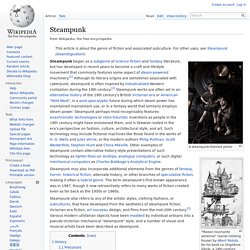 History[edit] Precursors[edit] Origin of the term[edit] Dear Locus,Enclosed is a copy of my 1979 novel Morlock Night; I'd appreciate your being so good as to route it Faren Miller, as it's a prime piece of evidence in the great debate as to who in "the Powers/Blaylock/Jeter fantasy triumvirate" was writing in the "gonzo-historical manner" first. London Underground. The system's first tunnels were built just below the surface using the cut and cover method. 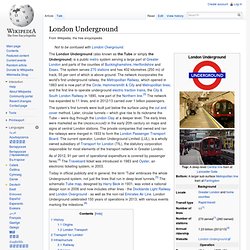 Later, circular tunnels – which give rise to its nickname the Tube – were dug through the London Clay at a deeper level. The early lines were marketed as the UNDERGROUND in the early 20th century on maps and signs at central London stations. The private companies that owned and ran the railways were merged in 1933 to form the London Passenger Transport Board. Project MUSE. “If London Were Like Venice”, 1899. ‘If London Were Like Venice: Oh! 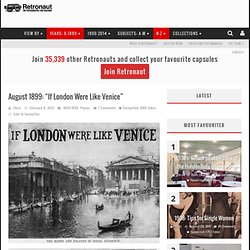 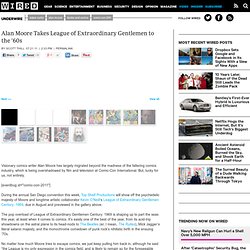 Metatemporal detective Mina Murray, left, follows an occult lead in LXG: 1969, out in August.Image courtesy Top Shelf.Alan Moore is writing a tome longer than the Bible, for Christ's sake! Visionary comics writer Alan Moore has largely migrated beyond the madness of the faltering comics industry, which is being overshadowed by film and television at Comic-Con International. [eventbug id="comic-con-2011"]