Celebrating Joseph Grimaldi. Zaz the clown spins a disc for Joseph Grimaldi Last week saw the one hundred and seventy-fifth anniversary of the death of the world’s most famous clown, Joseph Grimaldi, and a small group of devotees with painted faces gathered – as they do each year on the anniversary – at the former graveyard of St James’ Pentonville Rd to celebrate his memory, in the place where the bones of the great man lie interred. The church was deconsecrated long ago and the churchyard cleared, reconstituted now as Joseph Grimaldi Park with his tombstone given pride of place in a location twenty feet from where he is actually buried. Old maps of Britain and Europe from A Vision of Britain through Time. 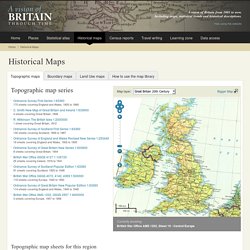 The viewer you can see lets you explore our seamless maps — scroll down to access individual map sheets. What is in our collection We hold three types of map, which you choose between by selecting one of the thematic tabs: Topographic maps: These are general purpose maps showing the physical landscape: hills and valleys, rivers and coast, plus man-made features like settlements, roads and railways. We hold these maps for different periods and at different scales. How we store our map collection.

A History of the County of Middlesex: Volume 7 (pp. 182-204) Apart from Roman Watling Street, evidence of man's activities in the Willesden area before the Saxon period is dubious.

According to local tradition there were numerous Neolithic finds at Park Royal, Bronze Age vessels on the site of Brent reservoir, and Roman bricks at Neasden. There have also been suggestions of Iron Age tracks and hill-top forts. ( fn. 5 ) From the late Anglo-Saxon period scattered, nucleated hamlets were established in clearings in woodland usually on elevated, well drained sites watered by streams and wells, at Willesden Green, Harlesden, and Neasden. History of Harlesden, in Brent and Middlesex. In the Footsteps of C.A. Mathew.

One hundred years ago yesterday, 20th April 1912, C.A.Mathew took photographs on the streets of Spitalfields. Today I publish my pictures of the same views as they are now. It is a hundred years ago this week that C.A.Mathew visited Spitalfields in April 1912, but he was present once again as my invisible guide when I walked through the close-knit streets to take new pictures in the same locations, and make a photographic assessment of the changes that a century has brought. I had copies of his pictures with me, and in each instance I held them up to ascertain the correct alignment of buildings and other landmarks that told me I was in the same spot exactly. Being in his footsteps revealed that C.A.Mathew composed his photographs to expose the most sympathetic play of light and shade, demonstrating a subtlety of tone that I dare not attempt to replicate in a different season at another time of day, in another age. 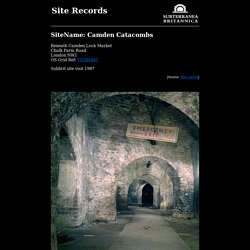 The Camden Catacombs, as they have become known are were once owned by British Railways but have now passed into multiple ownership. Some sections were demolished during the redevelopment of the area while other sections belong to Camden Market who discourage access. They were built in the 19th Century as stables for horses and pit ponies that were used to shunt railway wagons. Photo:Warehouse Basement - this has now been demolished. The network of tunnels also includes an underground canal basin and this is clearly visible, close to Camden Lock where the towpath is carried across it on a bridge. Further information and pictures about this site continues here. Tuesday Skeletons. Jonnie Fielding Go to St Bride’s church, just off Fleet Street.

It’s known for many things. The steeple is said to have inspired the modern tiered wedding cake, Samuel Pepys was born next door and the ‘Father of Fleet Street’, Wynkyn de Worde, set up his printing press nearby in 1500. Have a look at the Roman pavement that was discovered in the crypt during excavations following fire bomb damage to the church in WW2. And, if you’re not too squeamish, on selected Tuesdays at 3pm you can join a church tour, which allows you to visit the vaults (not usually open to the public) where you’ll find over 200 skeletons, either lying loose on the ground or meticulously placed into boxes and labelled.