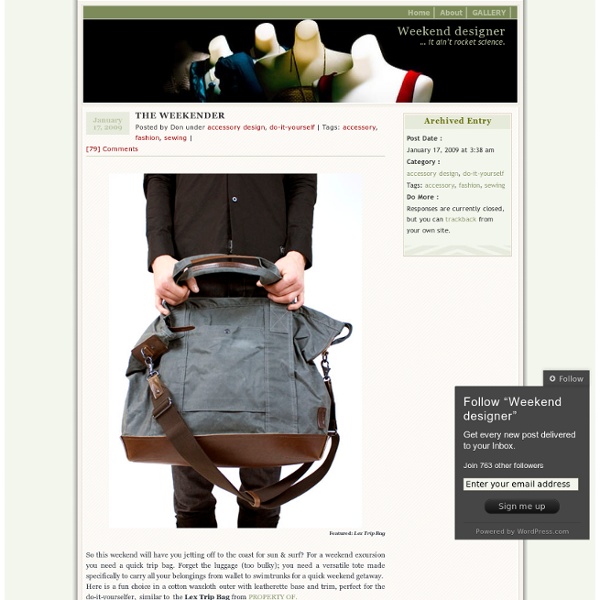 Hand-stamped bag. There's something about hand-stamped and screen printing that's been catching my fancy lately; and when that happens, I know I have to give it a spin. So the other day I brought out the acrylic paint, foam stamp, fabric, and mustered up some creative thinking. Of course, I was totally and undeniably inspired by the amazing tutorial over at A Beautiful Mess. Decoupaging with Lace - Urban Comfort Once in awhile I'll come up with a project that I get a little obsessed with and can't stop making. This decoupaged lace container that I made for Better Homes and Gardens was one of those projects. It all started with my love of textured pottery, but as I've been embracing my more feminine side lately, I was drawn to using lace as well. Admittedly, I wasn't even sure it would work. But not only did it work, it was one of the fastest and easiest projects I've ever undertaken. I started with white containers, cut a strip of eyelet lace wide enough to cover it, applied a layer of Mod Podge in matte finish, and wrapped the eyelet band around the container.

Watermark Tee by Sweet Verbana Hello U-Create readers! I am so excited to be guest posting here today. It just so happens to be my first guest post and I'm still a little shocked that it's here at Ucreate, one of my favorite blogs! Ric-Rac: 1 hour bag- tutorial This bag is so easy ! This is the new bag I made to take back to work this term. It took less than an hour from choosing the fabric to dumping my junk in it. In fact this tutorial took waaaayyy longer than the bag ! (the colours are great in real life but the orange doesn't photograph very well - sorry ) This pattern is on a piece of A4 paper so I'm sure you can work it out from that. Miss Make: Easy Drawstring Bag Tutorial This is one of myfavorite 'lunch break projects' from my job at the Urban Craft Center. We were able to craft all day if we wanted to, but the only time we were allowed to make something for ourselves was during our one hour lunch break. Everything else we made [very reasonably] belonged to the store. Usually I would work on a quilt for an hour, but occasionally I wanted to make an entire project beginning to end for the gratification factor.

Urban Comfort If I were brainstorming gifts for my son it's unlikely that a pencil holder would come to mind, but that's exactly what he's getting from me this Valentine's Day and I think he's going to love it. It all started with pottery classes, which I've been taking since September. My son has enjoyed watching my progress, taking particular delight in my mishaps since I am always reminding him that we get better at just about everything through practice. He mentioned recently that if I ever got past being able to make something other than bowls, I should make something for him. I think he suggested something totally ridiculous that I could never make in a million years, but I appreciate his confidence. At any rate, I had purchased a wood grain texture mat and made a vase to use for the holidays, which I liked a lot and was continuing to experiment with, working to create a more organic, slumping profile that felt treelike.

DIY Fashion-Forward Bracelets When money is tight, but fabulous fashion is a necessity, try out your crafting skills to make something new and fantastic. These bracelets are sure to impress and look quite expensive, but all they require is some gold chain and friendship bracelet yarn, both of which you can find at a craft store like Michael’s Art Supply. Make one signature piece or stack a bunch for a layered look! BFrend Bracelets by Monika You can find the full blog post here to see more styles of these bracelets. In order to create them, check out these various friendship bracelet patterns.

a cuppa and a catch up Quillow |kwi – lo| noun1: a quilt that folds into a pillow2: a pillow that unfolds into a quilt. So, it seems quite a few of you were keen to get the ‘how to’ on the Quillow I made recently :) This is the first quillow that I have made and I took process shots along the way so I could share the ‘how to’ of making a quillow if it worked out when I’d finished, which it did! Hurrah!

Teacup Totes and Ladybirds The weather this weekend was somewhat delightful, a wonderful change to the dark clouds and patchy rain we had in the middle of last week. I had been planning a photo shoot for my Mystic Moose website all week, but even though the sun was shining, the lighting just wasn’t quite right for it – it was too bright and harsh, and by the evening it had gone a little cloudy again. So instead I took my new teacup tote bag for a walk whilst I scouted for potential locations for photos. I made this new bag last weekend, after a rather lovely day in the garden of a cafe.

"Indestructible" Dog Toy My mom's dog, Molly, loves to play - an activity that for her usually involves rounding up all her toys and ripping them to shreds. In an effort to make some kind of indestructible toy or at least something that she could play with that might last longer than a half hour, I rounded up a few things and gave it a shot. While she was able to dismantle this awesome rope and dried sweet potato contraption, it at least took her a little longer, and she seemed to really love it. Molly was probably able to obliterate this because she is so tough (doesn't she just look so tough?), but it would be awesome (and probably last a little longer) for dogs who don't shred toys up in record time, as well as for puppies.