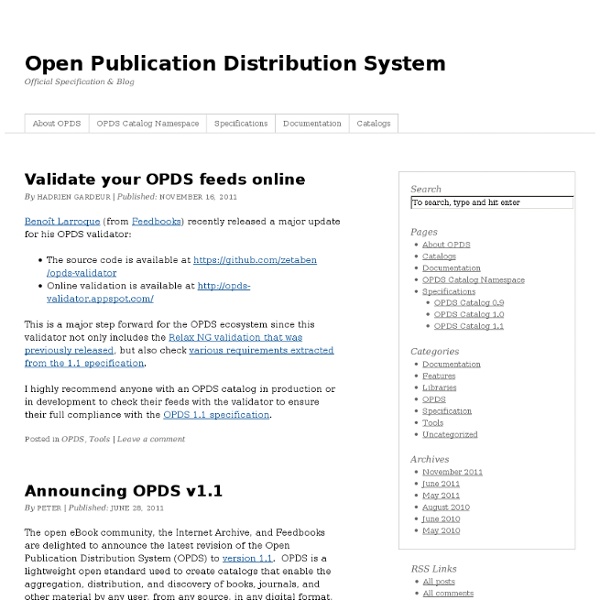 calibre (software) calibre is a free and open source e-book computer software application suite for multiple platforms. It allows users to manage e-book collections, as well as to create, edit and read e-books. It supports a variety of formats, including the common EPUB and Amazon Kindle formats, e-book syncing with a variety of e-book readers and conversion between e-book formats, within DRM restrictions. Kovid Goyal started developing libprs500 on 31 October 2006, when the Sony PRS-500 was introduced. The main idea was to enable the use of the PRS-500 on Linux. Goyal, with support from the MobileRead forums,[2] reverse-engineered the proprietary file format LRF. In 2008, the name was changed to calibre, generally written in lowercase even at the beginning of a sentence.[3] calibre supports many file formats and reading devices. Calibre helps to organize the personal e-book library by allowing the user to sort and group e-books by metadata fields.

calibre2opds Twine / An open-source tool for telling interactive, nonlinear stories Semantic Web Standards Here is COPS : Calibre OPDS (and HTML) PHP Server - Technology and me Why ? In my opinion Calibre is a marvelous tool but is too big and has too much dependencies to be used only for its content server. That's the main reason why I coded this OPDS / HTML content server. I needed a simple tool to be installed on a small server (Seagate Dockstar in my case). I initially thought of Calibre2OPDS but as it generate static file no search was possible. So COPS's main advantages are : No need for many dependencies.No need for a lot of CPU or RAM.Not much code.Search is available.With Dropbox / Owncloud it's very easy to have an up to date OPDS content server.100% OPDS valid code (checked with was my first PHP experiment and so fun to code. Disclaimer It's been reported as working on most web servers (Nginx, Apache, Cherokee, Lighttpd, IIS) and is used a lot on NAS (Synology, QNap, ReadyNas). I personally protect my COPS catalog with Basic HTTP auth and HTTPS. Features Demo Install Known problems

Is This The Crowdfunding Site App Developers Have Been Wishing For? The basic idea behind Bountysource seems easy enough to explain--it’s a crowdfunding site for open source software. But when the site first launched about a decade ago, those were still fairly esoteric concepts for potential users and investors. Even the founders, then fresh out of college, had never heard the term “crowdfounding,” says cofounder and COO David Rappo. The project died fast. "It ran for a few months before we realized this wasn't gonna pay our bills, and we needed to move on and get real jobs,” says Rappo. "Nowadays, we can say it's a crowdfunding platform for open source software, and people are like, we get it," Rappo says. The company’s recently hosted successful and well-publicized funding campaigns for Neovim, a modern update to the venerable Vi used by generations of Unix hackers, and for RVM 2, an enhanced tool for Ruby developers managing libraries of third-party code. "Kickstarter and Indiegogo are very much around raising one lump sum of money,” he says.