Camping Hack: How to Make Fire With Lemon. Nails into Lemon, I thought this guy is playing with lemon when I saw the picture, and never thought of a useful survival skill that we can use it someday if you go hiking on mountains or camping in the wild. 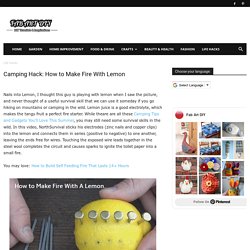 Lemon juice is a good electrolyte, which makes the tangy fruit a perfect fire starter. While theare are all these Camping Tips and Gadgets You’ll Love This Summer, you may still need some survival skills in the wild. In this video, NorthSurvival sticks his electrodes (zinc nails and copper clips) into the lemon and connects them in series (positive to negative) to one another, leaving the ends free for wires.

Touching the exposed wire leads together in the steel wool completes the circuit and causes sparks to ignite the toilet paper into a small fire. You may love: How to Build Self Feeding Fire That Lasts 14+ Hours While most people don’t have fresh lemons and may not have zinc nails and copper plugs on hand, this is still a smart trick to know. (13) Pinterest. An Off Grid Life All about battery banks! Estimated reading time: 8 minutes Are you researching batteries for living off the grid? 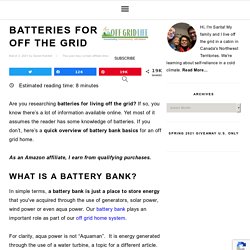 If so, you know there’s a lot of information available online. Yet most of it assumes the reader has some knowledge of batteries. If you don’t, here’s a quick overview of battery bank basics for an off grid home. As an Amazon affiliate, I earn from qualifying purchases. The Four Best Ways To Generate Off The Grid Electricity. SHTFPreparedness may collect a share of sales or other compensation from the links on this page. 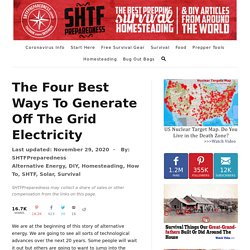 We are at the beginning of this story of alternative energy. We are going to see all sorts of technological advances over the next 20 years. How To Build A Solar Furnace For Only $50. Sustainable Energy. Permaculture forumsgrowiescrittersbuildinghomesteadingenergymonies kitchenpurity ungarbage communitywildernessfiber arts artpermaculture artisansregionaleducationskipexperiencesglobal resourcesthe cider pressprojectsdigital marketpermies.comprivate forumsall forums this forum made possible by our volunteer staff, including ... master stewards: 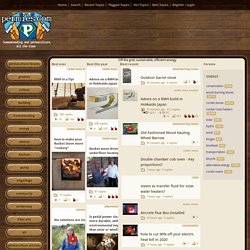 How To Make Endless Hot Water Without Electricity. 14 Projects To Cut Your Energy and Water Usage. Posted Categories: DIY These are projects to consider for your off grid homestead, whether you’re building a cabin in the woods that’s disconnected from any power or water sources, or just want to reduce your utility bills, going partially or totally off grid can be done on the cheap with a little creative thinking. 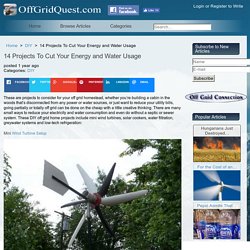 There are many small ways to reduce your electricity and water consumption and even do without a septic or sewer system. These DIY off grid home projects include mini wind turbines, solar cookers, water filtration, greywater systems and low-tech refrigeration: Mini Wind Turbine Setup. 11 Ways to Cook Without Power. Realities of Solar Power - A Tiny House Story. Yirego. Off Grid Living: Solar Myths Debunked. Posted Categories: Solar Power Solar power is a beautiful renewable resource, and so are hydro and wind power! 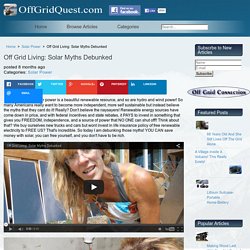 So many Americans really want to become more independent, more self sustainable but instead believe the myths that they cant do it! Really? Don't believe the naysayers! Renewable energy sources have come down in price, and with federal incentives and state rebates, it PAYS to invest in something that gives you FREEDOM, independence, and a source of power that NO ONE can shut off!! Before You Go Solar – READ THIS. Amazing SALt Lamp Runs 8 Hours on 1 Glass of Saltwater & Charges Your Cellphone. Portable Solar Powered Aquaponics Greenhouse Can Grow Food Year Round. Fifty buck fridge keeps your food cool without electricity. We often say that Small fridges make good cities, but perhaps tiny fridges that don't need electricity are even better. 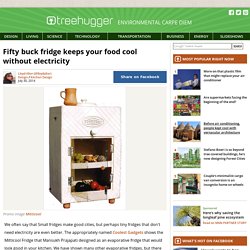 The appropriately named Coolest Gadgets shows the Mitticool Fridge that Mansukh Prajapati designed as an evaporative fridge that would look good in your kitchen. We have shown many other evaporative fridges, but there are some interesting features on this one, including the trendy plastic door that lets you see what is inside (as it allows some heat gain, there is a price on everything.) Prajapati describes how it works on the Mitticool site: Water from the upper chambers drips down the side, and gets evaporated taking away heat from the inside , leaving the chambers cool. The top upper chamber is used to store water. According to Coolest Gadgets, it sells for between $40 and $60. Electricity-free Groundfridge Lets You Store Produce Without Traditional Refrigeration. Weltevree United States. Tesla Motors Announces New Home Battery That Powers Your Home Off Grid. “Infinite Light” – Unlimited Solar Powered Light in a Bottle! Amazing Clay Refrigerator Keeps Food Cool Without Electricity.

Solar Powered Fridge Invented by British Student Keeps Food Cool for Days Without Using Electricity. Gorgeous Energy-Absorbing Trap Light Never Needs to be Plugged In. Healthy News and Information. Cohabitat - Photos du journal. Why Tesla's battery for your home should terrify utilities. Earlier this week, during a disappointing Tesla earnings call, Elon Musk mentioned in passing that he’d be producing a stationary battery for powering the home in the next few months. 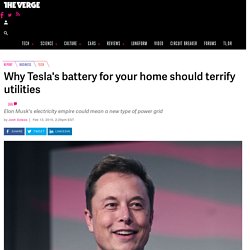 It sounded like a throwaway side project from someone who’s never seen a side project he doesn’t like. But it’s a very smart move, and one that’s more central to Musk’s ambitions than it might seem. To understand why, it helps to look not at Tesla, but at SolarCity, a company chaired by Musk and run by his cousin Lyndon Rive. SolarCity installs panels on people’s roofs, leases them for less than they’d be paying in energy bills, and sells surplus energy back to the local utility. It’s proven a tremendously successful model. When you have a lot of solar, you need a lot of batteries Fueled by financing systems like SolarCity’s, government subsidies, and a rapid drop in the price of photovoltaics, solar has been growing fast. Forecast storage market from GTM Research. Off-Grid Power. John Wells: Fascination Fuels A Life Off The Grid. John Wells and the Field Lab, his 128 square foot home in Southwest Texas Many tiny house enthusiasts want to get off the grid, and design their homes to run on solar power and catch rainwater. 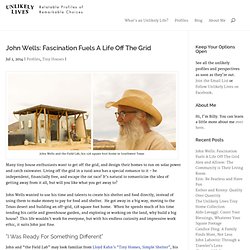 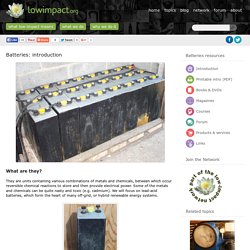 They are units containing various combinations of metals and chemicals, between which occur reversible chemical reactions to store and then provide electrical power. Some of the metals and chemicals can be quite nasty and toxic (e.g. cadmium). We will focus on lead-acid batteries, which form the heart of many off-grid, or hybrid renewable energy systems. A single 2-volt, lead-acid traction cell, as used in forklifts (a 24-volt forklift would use 12 of these, and a 48-volt forklift, 24). Although other chemical reactions can provide more electricity, the lead-acid battery is proving to be the most successful, because of its affordability, availability, and the fact that it is so robust. In a discharge situation (when giving out energy), elements of the electrolyte react chemically with elements of the plates to release energy in the form of electrons.

23 Ways To Make Fire. Please Share This Page: Google + stumbleupon tumblr reddit. Your Electricity Company Fears this Man. Trying out the SunRocket Solar Kettle - Living Big In A Tiny House. In our Tiny House, we are going to be completely off grid. For that reason, we are especially interested in anything that will help us to save energy and fuel. We’ve been really interested in solar cooking for a while, and when we stumbled upon the SunRocket Solar Kettle, we were really keen to give it a go. The good people at Solar Cooking Australia sent us one to try out, and this is what happened.

I'm a film-maker who is currently in the process of designing and building an off-the-grid Tiny House and filming the whole journey to help others who would like to do down the same path. Zeer Pot Instructable - Simple Off Grid Refrigeration Technique Transforms Food Storage In Africa. If you found yourself stuck without power following a hurricane, earthquake, or other disaster, there is no reason anyone should be without this kind of knowledge. In this day and age where we can share the knowledge around, I love this idea. Be sure to watch the video on its use and effictiveness as well on the second page of this article, and share it around to all of your loved ones.

A zeer pot is an evaporative cooler used in rural Africa and the Middle East to keep vegetables fresh. They consist of two terra cotta pots, one nested inside the other, with the gap between them filled with wet sand. The sand serves as a thermal mass that helps keep the pot cold once it has cooled down, and acts as a wick to spread the moisture up the walls of the pot. Endless Hot Water WITHOUT Electricity. Pilo - Shake It To Power It. Powering An Led Light Using The Force of Gravity. Tesla Motors Announces A New Home Battery; Living Off The Grid Will Soon Be Status Quo.

Free Hot Water! Free Heat! There's Free Energy Everywhere! It's Time To Learn How To Use It! Tesla Motors Announces A New Home Battery; Living Off The Grid Will Soon Be Status Quo. A Portable Washing Machine That Doesn't Need a Drop of Electricity. A pedal powered washing machine - Homestead Notes. You need an old washing machine drum and an old bicycle gears.