WikiHouse. A Portable, Plywood Micro House That's Perfect For Two. Are you a wanderluster? 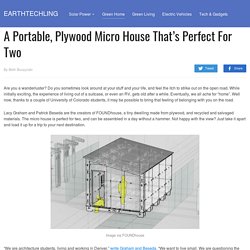 Do you sometimes look around at your stuff and your life, and feel the itch to strike out on the open road. While initially exciting, the experience of living out of a suitcase, or even an RV, gets old after a while. Eventually, we all ache for “home”. Well now, thanks to a couple of University of Colorado students, it may be possible to bring that feeling of belonging with you on the road. Lacy Graham and Patrick Beseda are the creators of FOUNDhouse, a tiny dwelling made from plywood, and recycled and salvaged materials. 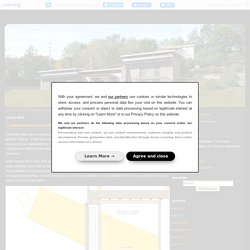 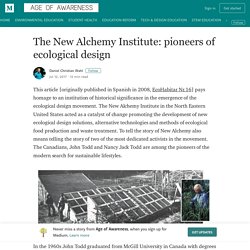 The New Alchemy Institute in the North Eastern United States acted as a catalyst of change promoting the development of new ecological design solutions, alternative technologies and methods of ecological food production and waste treatment. To tell the story of New Alchemy also means telling the story of two of the most dedicated activists in the movement. The Canadians, John Todd and Nancy Jack Todd are among the pioneers of the modern search for sustainable lifestyles. In the 1960s John Todd graduated from McGill University in Canada with degrees in agriculture, parasitology and tropical medicine.

He did a PhD in marine biology at the University of Michigan studying the behaviour of fish. In getting to know John and Nancy, they show themselves quickly as sincere, relaxed and humble people. Steve Job's Google of the 60s: Whole Earth Catalog revisited (+ homestead tour of a former editor) I would love to sit here on this... - Build Naturally with Sigi Koko. This is the inside of a small, simple,... - Build Naturally with Sigi Koko. Portable woodburning stove, heats up tents, yurts & tiny homes. Spending time in nature can be rewarding, but comfort is often compromised in the process. 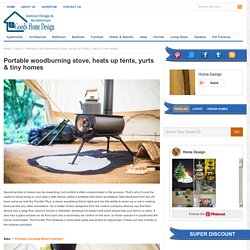 That’s why it could be useful to bring along on your trips a little device called a portable fold-down woodstove. Manufacturers from the UK have come up with the Frontier Plus, a clever woodstove that is light and has the ability to warm up or aid in making food just like any other woodstove. As a matter of fact, designers from the mother-company Anevay say that their device has a large flue, about 4 inches in diameter, allowing it to easily heat small places like your tent or a cabin.

It also has a glass window on its front door and a secondary air control on the door, so those spaces it is positioned will not be overheated. The Frontier Plus features a removable plate and simple to adjust legs. Łukasz Nowacki - Permakultura dla... - Łukasz Nowacki - Permakultura dla każdego. Hus med glastak i Dalsland - varva ner i The 72 Hour Cabin. Natural homes built by inspirational women, No.2. Home by Hiroshi Nakamura looks like a cluster of timber tepees. 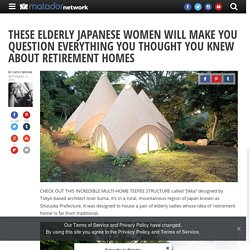 It’s in a rural, mountainous region of Japan known as Shizuoka Prefecture. It was designed to house a pair of elderly ladies whose idea of ‘retirement home’ is far from traditional. They live on site with their caretakers, sharing the living space, work space and kitchen, all arranged in a square formation. In the center of the complex, there’s a spiral-shaped pool which is easily accessible for wheelchair users. Teepee-shaped buildings by Issei Suma house community kitchen and pool. This cluster of tent-like structures was designed by Tokyo architect Issei Suma to provide meals and accommodation to the elderly residents of a small Japanese community (+ slideshow). 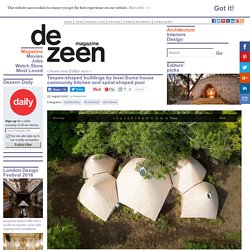 Called Jikka, the small complex is made up of five pointy structures, containing an assortment of facilities including a spiral-shaped paddling pool and a spacious kitchen. Suma designed the buildings for a pair of ladies in their 60s, one a social worker and the other a cook. Located on a rural site in Japan's mountainous Shizuoka Prefecture, the 100-square-metre complex functions as both their home and workplace.

It facilitates a food delivery service for older people, but also offers nursing care to people with disabilities. Each of the five buildings is square-shaped in plan, and they all overlap one another. 8 Inexpensive Earth Homes Almost Anyone Can Afford. Many people dream of building their own home, but the financial cost and environmental toll of starting from scratch can often seem overwhelming. 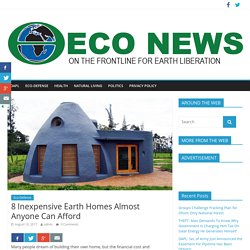 It doesn’t have to be. By stepping outside the box and using natural methods, almost anyone can afford to build their own green home out of sustainablematerials. “Earth homes” utilize surrounding terrain or other natural elements such as dirt, bamboo, wood, and clay to create a space with a negligible environmental impact. 10 spectacular homes that you wouldn’t see unless someone told you they were there. There are people who enjoy their privacy, and then there are people who revel in it. 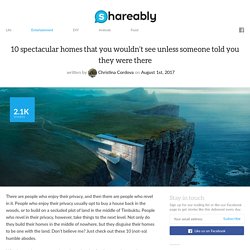 People who enjoy their privacy usually opt to buy a house back in the woods, or to build on a secluded plot of land in the middle of Timbuktu. People who revel in their privacy, however, take things to the next level. Not only do they build their homes in the middle of nowhere, but they disguise their homes to be one with the land. Don’t believe me? Great Big Story - In Wales, a community is building tiny... Man Builds Beautiful Church Using Living Trees. Barry Cox is not only a devout Catholic, he’s also an amazingly talented artist and designer. 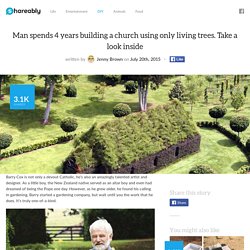 As a little boy, the New Zealand native served as an altar boy and even had dreamed of being the Pope one day. However, as he grew older, he found his calling in gardening. Barry started a gardening company, but wait until you the work that he does. It’s truly one-of-a-kind. You see, Barry has combined his strong faith with his creative talents to create something truly astonishing. Moon to Moon: Natural Light :Ceiling to Floor Windows... In these colder darker overcast English Autumn days I am really thankful for the floor to ceiling windows in my sitting room that let in as much light as possible. 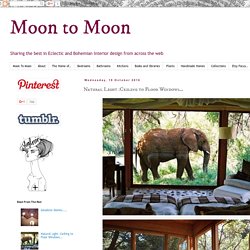 My garden may not quite be the urban jungle retreat I would like it to be (it is getting there) but it is great to pull back the curtains and let the natural light flood the room (or creep in on more overcast days). Each of the rooms i have chosen here have large windows and whether it is another building outside a woodland or an elephant (!!!!!) Each of them makes the most of the natural light, which is so crucial to our health and wellbeing.... yet modern mass-built houses seem to forget this detail... I recently read this little excerpt (below) which I found really interesting so I thought I would share with you guys about how light effects our mind and bodies....

STODOŁY – nowoczesna STODOŁA. Scandinavian Modern black HOUSE / Simon Steffensen – nowoczesna STODOŁA. This New Neighborhood Will Grow Its Own Food, Power Itself, And Handle Its Own Waste. If you live inside one of the houses in a new neighborhood being built in an Amsterdam suburb, your dining room might be next to an indoor vegetable garden. Outside, you'll have another seasonal garden. And down the street, almost everything you eat will be grown in high-tech vertical farms.

Mirrored Buildings. Mirrored Buildings Mirror House by MLRP is a transformation of an existing Playground Structure. A sustainable wood structure was covered with mirror polished stainless steel. "The mirrored gables create a sympathetic transition between built and landscape and reflects the surrounding park, playground and activity. " mlrp.dk Slighlty bent mirrors were mounted on the gabled ends of a kindergarden pavilion in Copenhagen. mlrp.dk Art Installation by Harumi Yukutake.Each piece of glass was handcut.yukutake.net Lucid Stead, an installation by artist Phillip K.

Architecture-Sculpture. Savin Couëlle was born in Aix-en-Provence, France in 1929. He studied architecture at the National School of Fine Arts in Paris. After school he spent seven years in Madrid designing film sets. In 1962 he helped his architect father, Jacque renovate the Hotel Cala di Volpe in Costa Smeralda, Sardinia, Italy. Savin has maintained a home and work base in Porto Cervo, Sardinia since 1962, although he travels and works worldwide, he has yet to be commissioned to build a home in the U.S.. www.couelle.com Savin Couëlle.Juniper beams reinforce the ceiling.Villa Karim, Sardinia. www.couelle.com Savin Couëlle. Villa due Mari, Costa Smeralda, Sardinia. By architect Savin Couelle, Villa dei Due Mari beautifully integrates with the natural landscape, and appears as though it has always belonged. Savin Couëlle.Staircase with organic ballisters. Savin Couëlle.Down House, New Zealand. Salvaged Wood Interior Walls. Salvaged Wood Interior Walls Reclaimed wood paneled bedroomat Blackberry farm, Tennessee.Image: beallandthomas.com Reclaimed wood ceiling in California.By melledesign.com.

The Mini House by Jonas Wagell is a Modern Prefab That Pops Up in Two Days! Hotel Shabby Shabby: Super Cool Temporary Hotel Features Recycled Rooms Built Under €250. Cumulus, A Space for Calm Simulates Life in a Cloud in Germany. You'll never believe what's hiding inside this boulder. Mitchell Joachim: Don't build your home, grow it!

What would our homes look like if designed around how we use them? An educational facility in alternative technology. Natural homes built by inspirational women. "If everyone had a cob tub it would be a different world…" Listen to Becky Bee… Epu_floorplan. Wandering the Good : Photo. Three Tent Home. The Glass House by AR Design Studio. Daily Needs Modular Chicken Coop & Garden. A Modern Home Inspired by the Remains of a Barn. Add Some Warmth: 12 Plywood Interiors. Natural Architecture: Home-Grown Artistic Tree Houses. 100% Battery-Free, Human-Powered, Hand-Crank Eco Light. ‘Woodpile’ Cabin: Log-Lined Fire Pit = Four-Season Shelter. Semi Trucks Recycled into New Penthouse & Bay Windows.