A growing respect for the Samwer brothers. It isn't hard to feel negative about Rocket Internet; the infamous worldwide startup operation that has managed to make a business of taking emerging markets by surprise. Based primarily in Berlin, the operation is largely a 'cloning' one, centered around the identification of potentially-lucrative and somewhat-proven tech-based products in established markets such as the US and UK, copying them, and rolling them out into emerging markets such as Eastern Europe and Latin America, at a massive scale.

Recent targets have included Groupon (Rocket's Citydeal was later acquired by Groupon for $169m), Airbnb, Pinterest, Stripe and, most recently, Jack Dorsey's Square. The company recently published a new website which reveals that over 100 companies have been produced by the self-proclaimer "incubator", stretching over in excess of 40 countries. The Samwers had their first run as startup founders long before the days of Rocket Internet. "Les start-up de Rocket Internet accélèrent leur développement en France" Bamarang, Westwing, DropGifts et HelloFresh... 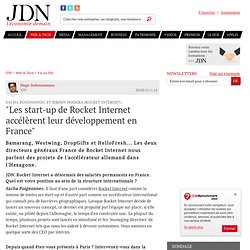 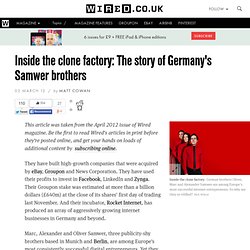 Be the first to read Wired's articles in print before they're posted online, and get your hands on loads of additional content by subscribing online. They have built high-growth companies that were acquired by eBay, Groupon and News Corporation. They have used their profits to invest in Facebook, LinkedIn and Zynga. Their Groupon stake was estimated at more than a billion dollars (£640m) at the close of its shares' first day of trading last November. And their incubator, Rocket Internet, has produced an array of aggressively growing internet businesses in Germany and beyond. Marc, Alexander and Oliver Samwer, three publicity-shy brothers based in Munich and Berlin, are among Europe's most consistently successful digital entrepreneurs.

Now the brothers are facing more than peer disapproval. So, just who are the Samwers? Alexander, 37, is in the office too, wearing a blue Lacoste shirt. In confidential email Samwer describes online furniture strategy as a 'Blitzkrieg' Rocket Internet, the Berlin-based incubator best known for German-language clones of US startups like Zappos and Groupon, now has big ambitions, especially in the online furniture space according to information passed to TechCrunch Europe. 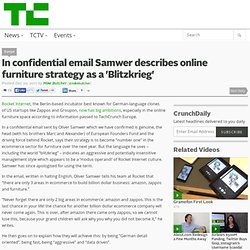 In a confidential email sent by Oliver Samwer which we have confirmed is genuine, the head (with his brothers Marc and Alexander) of European Founders Fund and the driving force behind Rocket, says their strategy is to become “number one” in the ecommerce sector for furniture over the next year. But the language he uses – including the world “blitzkrieg” – indicates an aggressive and potentially insensitive management style which appears to be a ‘modus operandi’ of Rocket Internet culture. Samwer has since apologised for using the term. In the email, written in halting English, Oliver Samwer tells his team at Rocket that “there are only 3 areas in ecommerce to build billion dollar business: amazon, zappos and furniture.” JP Morgan Invests "Upwards of $50M" in Asia-based Rocket Clone Lazada. JP Morgan’s love-in with Rocket Internet is continuing after the Germany-based incubator confirmed that the firm will invest in Lazada, its Southeast Asia-based online retailer. 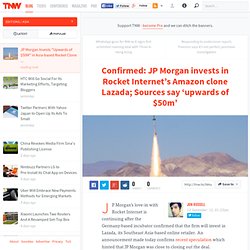 An announcement made today confirms recent speculation which hinted that JP Morgan was close to closing out the deal. The investment, which marks Rocket Internet’s first for a business in Southeast Asia, is undisclosed, however sources close to the company told TNW it is worth “upwards of $50 million”, while one suggested it could be as high as $100 million. The exact size of JP Morgan’s stake was also not revealed in the press release, although we understand that further details of the deal will be communicated this month. The deal is the latest in a long line that have seen JP Morgan pump cash into various Rocket Internet ‘clones’ within the online retail space. The full details of the press release are below: LAZADA, the leading online department store in Southeast Asia, has confirmed an investment by J.P.