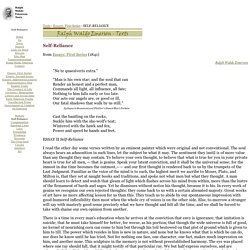 " "Man is his own star; and the soul that can Render an honest and a perfect man, Commands all light, all influence, all fate; Nothing to him falls early or too late. Our acts our angels are, or good or ill, Our fatal shadows that walk by us still. " Cast the bantling on the rocks, Suckle him with the she-wolf's teat; Wintered with the hawk and fox, Power and speed be hands and feet.

ESSAY II Self-Reliance I read the other day some verses written by an eminent painter which were original and not conventional. Real Self Reliance » The Top Battery Operated Items To Keep For An Emergency. Bio: This article was written by Mark Solomon, who enjoys writing about financial self-reliance and survivalism. 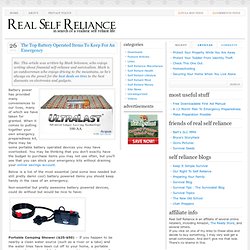 Mark is an outdoorsman who enjoys driving to the mountains, so he’s always on the prowl for the best deals on tires to the best discounts on electronics and gadgets. Battery power has provided many conveniences to our lives, many of which we have taken for granted. When it comes to putting together your own emergency preparedness kit, there may be some portable battery operated devices you may have overlooked.

You may be thinking that you don’t exactly have the budget to purchase items you may not use often, but you’ll see that you can stock your emergency kits without draining your online savings account. Below is a list of the most essential (and some less needed but still pretty damn cool) battery powered items you should keep handy in the case of an emergency. 25 Ways to be More Self Reliant Today. Becoming independent is not an overnight thing but everything has a beginning and this is no different. 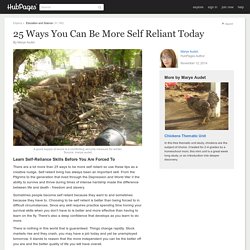 The small steps you take today can change your life, even save your life, further down the road. 1. Get Out of Debt Getting out of debt is the number one priority. How to Be Self Reliant: 7 steps. Expert Reviewed Four Methods:Developing Independent HabitsManaging Money IndependentlyLiving with Self-RelianceFeeling Emotionally Self-ReliantCommunity Q&A Although being in a committed, bonded relationship can enrich your life, feeling unable to function without another person could lead to a problem like Relational Dependency.[1] Relational Dependency is a progressive disorder, meaning that the relationship may start off healthy but one person becomes gradually more controlling of or dependent upon the other, which can lead to an unhealthy relationship. 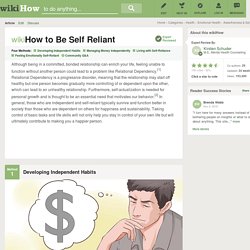 Furthermore, self-actualization is needed for personal growth and is thought to be an essential need that motivates our behavior.[2] In general, those who are independent and self-reliant typically survive and function better in society than those who are dependent on others for happiness and sustainability. Steps Developing Independent Habits Managing Money Independently. Real Self Reliance. Ten Reasons to Become Self-Sufficient and Ten Ways to Get There. We are now three to five generations removed from the rural backbone that strengthened America. 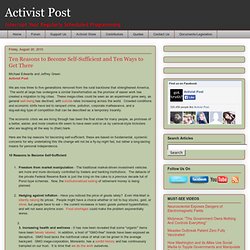 The world at large has undergone a similar transformation as the promise of easier work has created a migration to big cities. These mega-cities could be seen as an experiment gone awry, as general well-being has declined, with suicide rates increasing across the world. Crowded conditions and economic strife have led to rampant crime, pollution, corporate malfeasance, and a dog-eat-dog type of competition that can be described as a temporary insanity. The economic crisis we are living through has been the final straw for many people, as promises of a better, easier, and more creative life seem to have been sold to us by carnival-style tricksters who are laughing all the way to (their) bank. How To Be Self Sufficient, Self Sufficiency, Simple Living. How to Become More Self-Sufficient. Over the Thanksgiving weekend I was chatting with a friend about mechanics. 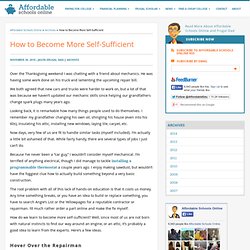 He was having some work done on his truck and lamenting the upcoming repair bill. We both agreed that new cars and trucks were harder to work on, but a lot of that was because we haven’t updated our mechanic skills since helping our grandfathers change spark plugs many years ago. Looking back, it is remarkable how many things people used to do themselves. I remember my grandfather changing his own oil, shingling his house (even into his 60s), insulating his attic, installing new windows, laying tile, carpet, etc. Now days, very few of us are fit to handle similar tasks (myself included). Because I’ve never been a “car guy,” I wouldn’t consider myself mechanical. The root problem with all of this lack of hands-on education is that it costs us money. The urban guide to being self sufficient'ish. Things You Can Do to be More Self-Sufficient. How, where and what you do to become self-sufficient is a personal choice. 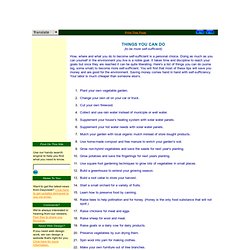 Doing as much as you can yourself in the environment you live is a noble goal. It takes time and discipline to reach your goals but once they are reached it can be quite liberating.