Cartoon Fundamentals: How to Draw a Cartoon Face Correctly 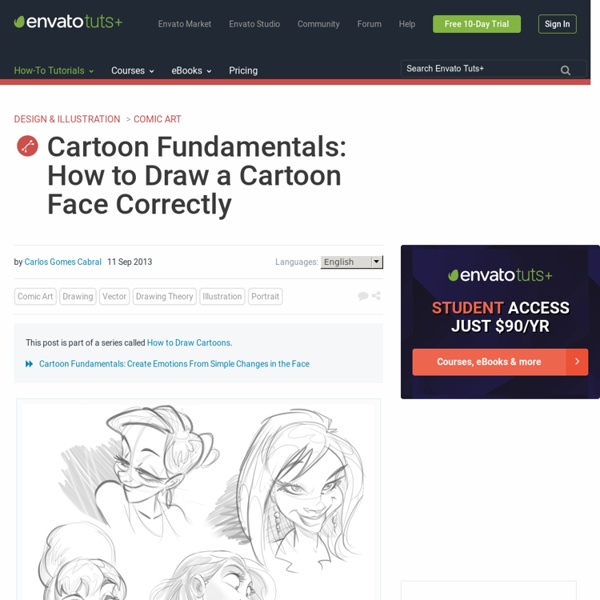 Children are the main audience when referring to the cartoons. A good cartoonist is one who can extract the main details of an object or a human being and simplify in shapes so that a child can recognize and be attracted to what they're looking at. Was studying infant perception that masters like Walt Disney, Hanna & Barbera, Chuck Jones, Jim Henson, Walter Lantz and many others have enchanted the world with its magical and eternals characters. My role here is to make you understand the proper way to assemble this puzzle and definitely learn how to build any character from the techniques presented. I guarantee you will be shocked at how easy it is to create a cartoon expression that children (and adults) will adore! The human-being has a very interesting feature: We can synthesize the details that make up a structure or an object in very complex ways into very basic and simple ones. Can you tell me if the two images below represent the same object? The basic cartoon shape is a circle.

Human Anatomy Fundamentals: Basics of The Face Having thoroughly explored the human body, it is time to start looking more closely at its details, starting with the face. The very first thing the eye looks for, in any setting, is the human face, and this applies also to art: a viewer will first look at the face of your character. Mastering the face, particularly the drawing of lively expressive faces, is therefore well worth the effort. In this tutorial we're learning the basics of the face – proportions, features and foreshortening, and we'll go into the details of facial variations in our next session. The skull is a slightly flattened sphere, to which the jaw is appended so that, seen face-on, it has the shape of an egg, pointy side down. Two perpendicular midlines cut the egg into four quarters.

Cartoon Fundamentals: How to Draw a Cartoon Body The pleasure of creating a cartoon character is immeasurable. The act of building and developing a character is not just linked to the construction of the figure: each character has its own shape, personality and attributes. It's OK if you already know about the proportions of the head and about facial expressions. But that knowledge is useless if you don't know how to build their bodies! The artist must take into consideration these qualities in order to build a character that is plausible in the eye of the audience. Backgrounds Vectors, Photos and PSD files Eiffel tower in Paris. Post card 1.665 0 4 days ago Abstract geometrical banner with triangles 24.987 80 4 weeks ago Silhouettes of people in a busy office 719 17 2 days ago Retro label on rustic background 150.378 162 6 months ago Dark luxury golden template 239.145 180 9 months ago

Cartoon Fundamentals: How to Create Movement and Action What is a cartoon without any kind of action? What is a cartoon, that doesn't tell us a story? You may have seen artistic studies of the human body, drawn from a live model for reference. Old Paper Texture Old Paper Texture Old Paper Texture Source: View Source View Image Report Free Paper Borders 40+ Digital Painting Tutorials You Should Study Tutorials September 8, 2010 Painting is one masterly form of art that technology has helped elevate. Not only are effects more easily and better achieved, but design software has also made this art form even more accessible to a designer with a computer, an eye for detail and a genuine desire to learn. If you’re one of those designers who aspire to create digitally painted artwork like these, we think you’d learn more than a thing or two in this collection of tutorials. Read through them, study the variety of techniques they employ, and come out an accomplished digital painter in your own right! Painting Wavy Hair

How to quickly create different character concepts There are two ways to quickly create different character concepts: the easy way and the hard way. The hard way is painting over the portrait and altering the form and appearance of the character manually. This takes longer, though. In the easy way, I use the Transform tools to help me alter the shapes and sizes of the character's facial features. design.tutsplus Elephants are a one of a kind - there's no other animal with such amazing tusks and trunk. They can be also tricky to draw, since they look so simple. I will show you how to draw a realistic elephant, be it African or Asian, in every pose you'll want to. Follow me and I'll teach you all elephant things!

Cartoon Fundamentals: Create Emotions From Simple Changes in the Face There are millions of eyes, mouths, noses, ears, chins in the world, each with their own characteristics. However, to draw faces in a cartoon style, you just need to understand the basics of them. Once you have mastered these concepts, pay attention to the depth, make sure that the head of your characters give the impression of being three-dimensional and you have mastered the technique of drawing them from every imaginable angle. If you can do that, great! Red and white gingham pattern Vector Freepik Freepik Selection Red and white gingham pattern Free Vector Free Download Free license with attribution Direct Download without attribution Ai How to edit this Vector?