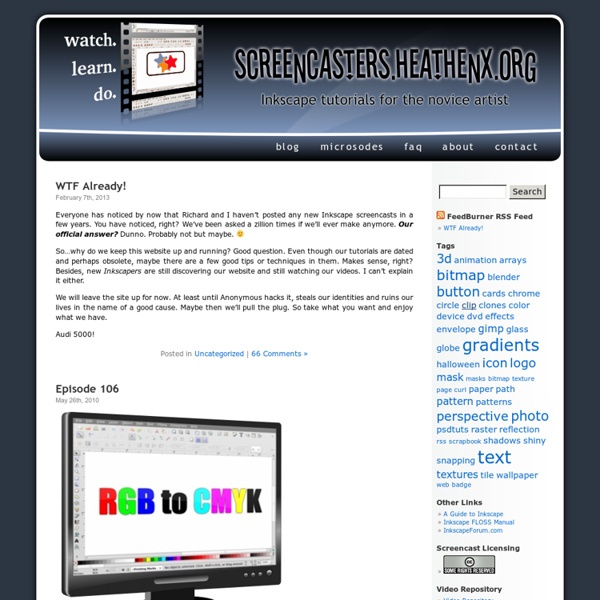 Make Business Video | Animated Video Production | GoAnimate.com Inkscape-fr Making a poster in Inkscape – The Beth Project I went to Physiology 2016 at the end of July, and I presented what I think was definitively my Best Poster Ever. Poster selfie!A photo posted by Beth McMillan (@teraspawn) on I usually make my posters in LibreOffice Impress, but this time I had some trouble with Impress crashing and so finally decided to make the switch to Inkscape, a free vector graphics program which works on Linux, Mac and Windows. I'd used it previously for making some vector graphics, but I still learned a lot of new tricks in making this. One word of warning - I used the Linux version of Inkscape, and I'm not sure if everything's in the same menus for all versions. Change page size First things first: set the page size to your poster size. Navigating I seem to constantly hide the scrollbars by accident. There are also some useful shortcuts for different zoom levels - 5 zooms out to show you the whole page and 1 gives you a 1:1 zoom. Snap to Grid First, show the grid by going to View > Grid, or #. Align & Distribute Fonts

/chapter: Creating-Icons / INKSCAPE Inkscape is an excellent tool for creating icons. Generally speaking icons are required in different formats so that makes SVG an excellent format as it is a scalable graphics format. This means you can shrink or enlarge the graphic to the required size without losing any quality. This tutorial was made with Ubuntu, but works with any operating system supported by Inkscape. Create New Icon File First open Inkscape and to create a new file. A new blank file will then open with, in this example, a grid: The grid is a 32x32 block grid, the same size as many of the icons you will find on your computer. Save the File Before you start work it is a good idea to first save the file. This will pop open a dialog box. You can change the name of the file to anything to help you identify it (in the above example it is 'drawing.svg'). Using the Icon Preview Window View > Icon Preview... Start Work Now we will proceed to draw the icon. Lets start with making the background circle. Exporting to PNG

SVG Transformation It is possible to transform the shapes created in an SVG image. For instance move, scale and rotate the shapes. This is a handy way of displaying vertical or diagonal text. Transformation Example Here is a simple example: <svg xmlns=" xmlns:xlink=" x="50" y="50" height="110" width="110" style="stroke:#ff0000; fill: #ccccff" transform="translate(30) rotate(45 50 50)" ></rect><text x="70" y="100" transform="translate(30) rotate(45 50 50)" >Hello World</text></svg> Here is the resulting image: Notice the transform attribute of the <rect> and <text> elements. What Elements Can Be Transformed? You can apply transformation to all SVG shapes. Transformation Functions SVG provides four transformation functions: translate() rotate() scale() skew() matrix() Each of these functions will be explained in more detail in the following sections. Translate The translate() function moves a shape. translate(50,25) Rotate Scale scale(2,3); Here is an example:

Imppao’s Weblog Hunspell 2.0: High-Performance Stemmer, Tokenizer, and Spell Checker for R | R-bloggers A new version of the ropensci hunspell package has been released to CRAN. Hunspell is the spell checker library used by LibreOffice, OpenOffice, Mozilla Firefox, Google Chrome, Mac OS-X, InDesign, Opera, RStudio and many others. It provides a system for tokenizing, stemming and spelling in almost any language or alphabet. The R package exposes both the high-level spell-checker as well as low-level stemmers and tokenizers which analyze or extract individual words from various formats (text, html, xml, latex). This new version now includes a beautiful vignette which gives an overview of the main functionality to get you started! The package is most easily installed from CRAN: install.packages("hunspell") Or to get the latest version from Github: devtools::install_github("ropensci/hunspell") This package does not require any system dependencies (libhunspell is now bundled with the package). Related

Pretty Fonts with Glyphs The glyph discussion is not new on Weddingbee. I was personally first introduced to them by Mrs. Licorice here, and ever since, have been smitten. But I thought I’d bring it up again now that I’m fresh off of finishing my friend Robin’s invites! If you’re unfamiliar with the glyph palette, then here’s a quick layman’s rundown. There are certain fonts out there that allow you to “manipulate” certain (or all) of the letters in the alphabet, to create a customized look for your words. There are a bunch of fonts out there that have glyphs, but here are a few of my favorites: Affair Candy Script Ministry Script Burgues Script Buffet Script Bickham Script To access a font’s glyphs (if it has them), you’ll need Adobe InDesign, Illustrator, or QuarkXPress 7.0. Which is your favorite? Mrs. Location: Northern California Occupation: Weddingbee Editor in Chief Wedding Date: June 2008 Venue: Winery in the Gold Country

Inkscape. Draw Freely. Writing your thesis with R Markdown (3) – Figures, R code and tables | Rosanna's Research This is the third post in a short series of tutorials to write your thesis in R Markdown. You can find instructions on how to get started in the first post. These tutorials were written by a Windows user, so if you are using a different operating system some details may differ. Welcome back to part three of this tutorial! In the previous post we looked at including text, citations, and equations in the thesis chapter. This time we’ll look at including figures, R code and tables. Step 4: Including a figure You can include a figure in an R Markdown by writing ‘! The indentation of the above bit of text is important, knitr will not understand it if it is not written exactly like the above. To refer to the figure in-text, a label needs to be added to the figure. Left: Adding a figure. Note: figures are seen as ‘floats’ by LaTeX, and therefore are not placed immediately where you call them. Step 5: using R code Here is how you include R code in your story. Left: Using R code in R Markdown.