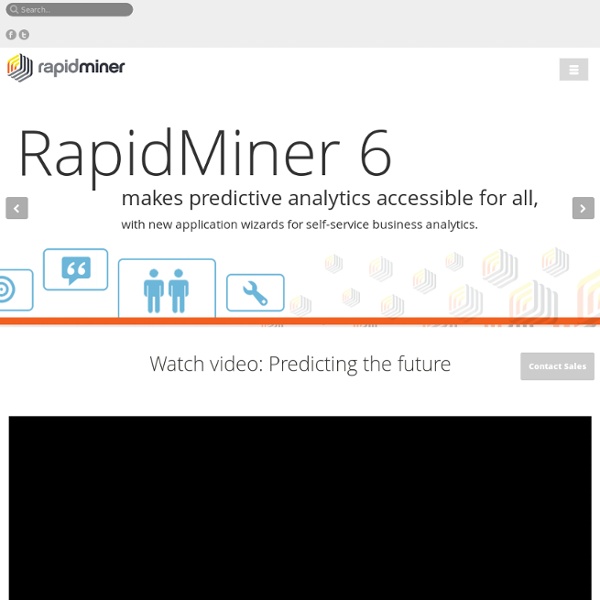 Eclipse IDE for R Background: Eclipse is an open source Integrated Development Environment (IDE). As with Microsoft's Visual Studio product, Eclipse is programming language-agnostic and supports any language having a suitable plugin for the IDE platform. For Eclipse, the R language plugin is StatET. Figure 1 (above): Eclipse, StatET with R, and the R debugger (bottom window) at work. Converting the Enterprise to an Adaptive Neural Network « Kyield Those tracking business and financial news may have observed that a little bit of knowledge in the corner office about enterprise architecture, software, and data can cause great harm, including for the occupant, often resulting in a moving van parked under the corner suite of corporate headquarters shortly after headlines on their latest preventable crisis. Exploitation of ignorance in the board room surrounding enterprise computing has become mastered by some, and is therefore among the greatest of many challenges for emerging technology that has the capacity for significant improvement. The issues surrounding neural networks requires total immersion for extended duration. Since many organizations lack the luxury of time, let’s get to it. Beware the Foreshadow of the Black Swan A recent article by Reuters confirms what is perhaps the worst kept secret in the post printing press era: Many Wall Street executives say wrongdoing is necessary: survey.

Big Data Right Now: Five Trendy Open Source Technologies Big Data is on every CIO’s mind this quarter, and for good reason. Companies will have spent $4.3 billion on Big Data technologies by the end of 2012. But here’s where it gets interesting. Those initial investments will in turn trigger a domino effect of upgrades and new initiatives that are valued at $34 billion for 2013, per Gartner. Over a 5 year period, spend is estimated at $232 billion. Facebook Graph API Explorer with R (on Windows) « Consistently Infrequent library(RCurl) library(RJSONIO) Facebook_Graph_API_Explorer <- function() { Anametrix You want to make better use of data to improve all forms of consumer interactions, from campaign performance and social engagement to web site content and ad planning. It’s the key to determining whether your marketing decisions lead to success. But your data is trapped in dozens of systems, databases, spreadsheets and applications – both inside and outside your organization. Sound familiar? Unify Your Data Anametrix enables marketers like you to bring together and make sense of all your data, so you can focus your time on the analysis that will drive marketing performance.

An Efficient Density based Improved K- Medoids Clustering algorithm An efficient density based improved k-medoids clustering algorithm seminar topic explains about extracting information from raw data using clustering methods. In order to extract information from raw data kmedoids is the basic method used. Though they are easy to implement but they are many drawbacks in these methods. In order to overcome these drawbacks we propose a density based k-medois clustering method which performs better than DBSCAN in terms of quality. In this paper students can find detailed explanation on advantages of DBSCAN, disadvantages of DBSCAN, evaluation and results, conclusion.

R: Web Scraping R-bloggers Facebook Page « Consistently Infrequent Introduction R-bloggers.com is a blog aggregator maintained by Tal Galili. It is a great website for both learning about R and keeping up-to-date with the latest developments (because someone will probably, and very kindly, post about the status of some R related feature). Feature selection In machine learning and statistics, feature selection, also known as variable selection, attribute selection or variable subset selection, is the process of selecting a subset of relevant features for use in model construction. The central assumption when using a feature selection technique is that the data contains many redundant or irrelevant features. Redundant features are those which provide no more information than the currently selected features, and irrelevant features provide no useful information in any context. Feature selection techniques are a subset of the more general field of feature extraction.