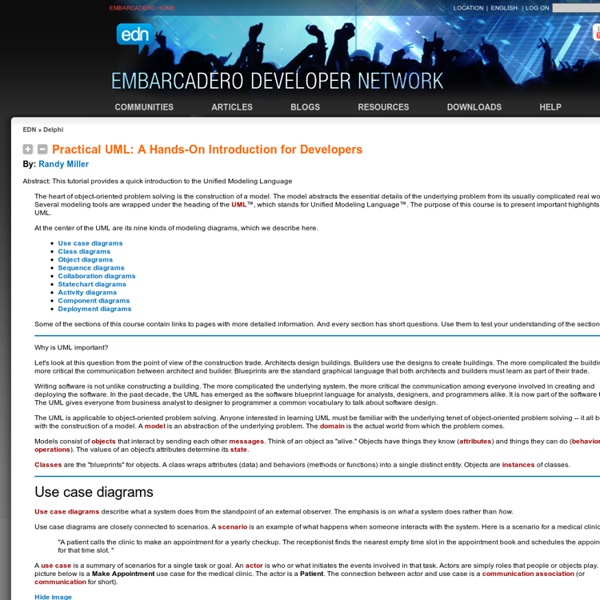 The heart of object-oriented problem solving is the construction of a model. The model abstracts the essential details of the underlying problem from its usually complicated real world. Several modeling tools are wrapped under the heading of the UML™, which stands for Unified Modeling Language™. The purpose of this course is to present important highlights of the UML. At the center of the UML are its nine kinds of modeling diagrams, which we describe here. Some of the sections of this course contain links to pages with more detailed information. Why is UML important? Let's look at this question from the point of view of the construction trade. Writing software is not unlike constructing a building. The UML is applicable to object-oriented problem solving. Models consist of objects that interact by sending each other messages. Classes are the "blueprints" for objects. Use case diagrams Use case diagrams describe what a system does from the standpoint of an external observer. Class diagrams

UML Tutorial - UML Unified Modelling Language - Sparx Systems The Unified Modeling Language (UML) has quickly become the de-facto standard for building Object-Oriented software. This tutorial provides a technical overview of the 13 UML diagrams supported by Enterprise Architect. UML 2 semantics are explained in detail in the new UML 2.0 tutorial. Firstly... The OMG specification states: "The Unified Modeling Language (UML) is a graphical language for visualizing, specifying, constructing, and documenting the artifacts of a software-intensive system. The important point to note here is that UML is a 'language' for specifying and not a method or procedure. UML defines the notation and semantics for the following domains: The UML also defines extension mechanisms for extending the UML to meet specialized needs (for example Business Process Modeling extensions). Part 2 of this tutorial expands on how you use the UML to define and build actual systems. See also Business Process Modeling (pdf).

Software design This article is about the activity between requirements and programming. For the broader meaning, see software development. Software design usually involves problem solving and planning a software solution. Overview[edit] Software design can be considered as creating a solution to a problem in hand with available capabilities. When designing software, two important factors to consider are its security and usability. Software Design[edit] Design Principles[edit] Software design is both a process and a model. The design process should not suffer from “tunnel vision.” Design Concepts[edit] The design concepts provide the software designer with a foundation from which more sophisticated methods can be applied. Design considerations[edit] There are many aspects to consider in the design of a piece of software. Compatibility - The software is able to operate with other products that are designed for interoperability with another product. Modeling language[edit] Design patterns[edit] Usage[edit]

Game programming This article is about the specifics of the programming aspect of video game development, for a broader overview see video game development. Development process[edit] Prototyping[edit] Programmers are often required to produce prototypes of gameplay ideas and features. A great deal of prototyping may take place during pre-production, before the design document is complete, and may help determine what features the design specifies. Prototypes are developed quickly with very little time for up-front design and mostly act as a proof of concept or to test ideas. Game design[edit] Main article: Game design Though the programmer's main job is not to develop the game design, the programmers often contribute to the design, as do game artists. Programmers often closely follow the game design document. Production[edit] During production, programmers may create a great deal of source code to create the game described in the game's design document. Testing[edit] Main article: Game testing Maintenance[edit]

Video game development Video game development is the process of creating a video game. Development is undertaken by a game developer, which may range from a single person to a large business. Traditional commercial PC and console games are normally funded by a publisher and take several years to develop. Indie games can take less time and can be produced cheaply by individuals and small developers. The indie game industry has seen a rise in recent years with the growth of new online distribution systems and the mobile game market. The first video games were developed in the 1960s, but required mainframe computers and were not available to the general public. Mainstream PC and console games are generally developed in phases. Mobile games are, in general, much quicker to develop than the mainstream PC and console games. Overview[edit] Game development is the software development process by which a video game is produced. All but the smallest developer companies work on several titles at once. History[edit]

deWiTTERS Game Loop – Koonsolo Games The game loop is the heartbeat of every game, no game can run without it. But unfortunately for every new game programmer, there aren’t any good articles on the internet who provide the proper information on this topic. But fear not, because you have just stumbled upon the one and only article that gives the game loop the attention it deserves. Thanks to my job as a game programmer, I come into contact with a lot of code for small mobile games. (Thanks to Kao Cardoso Félix this article is also available in Brazilian Portuguese, and thanks to Damian/MORT in Polish) The Game Loop Every game consists of a sequence of getting user input, updating the game state, handling AI, playing music and sound effects, and displaying the game. bool game_is_running = true; while( game_is_running ) { update_game(); display_game(); } The problem with this simple loop is that it doesn’t handle time, the game just runs. FPS is an abbreviation for Frames Per Second. Game Speed Implementation Slow hardware

Fix Your Timestep! Introduction Hello, I’m Glenn Fiedler and welcome to the second article in my series on Game Physics. In the previous article we discussed how to integrate the equations of motion using an RK4 integrator. But how to choose this delta time value? Fixed delta time The simplest way to step forward is with a fixed delta time, like 1/60th of a second: double t = 0.0; double dt = 1.0 / 60.0; while ( ! In many ways this code is ideal. But in the real world you may not know the display refresh rate ahead of time, VSYNC could be turned off, or perhaps you could be running on a slow computer which cannot update and render your frame fast enough to present it at 60fps. In these cases your simulation will run faster or slower than you intended. Variable delta time Fixing this *seems* simple. double t = 0.0; double currentTime = hires_time_in_seconds(); while ( ! But there is a huge problem with this approach which I will now explain. Semi-fixed timestep What exactly is this spiral of death? Free the physics

Features - Multithreaded Game Engine Architectures Even though multicore processors have been available for the PC for well over a year, and the Xbox 360 has already sold millions, there is still a lack of knowledge regarding the development of game engines for multicore platforms. This article will attempt to provide a view to game engine parallelism on an architecture level. As shown by Gabb and Lake[1], instead of looking at multithreading on the level of individual components, we can find better performance by looking for ways to add parallelism to the whole game loop. There are two main ways to break down a program to concurrent parts: function parallelism, which divides the program to concurrent tasks, and data parallelism, which tries to find some set of data for which to perform the same tasks in parallel. One way to include parallelism to a game loop is to find parallel tasks from an existing loop. Figure 1. Costa[2] presents a way to automate the scaling of this kind of an architecture.