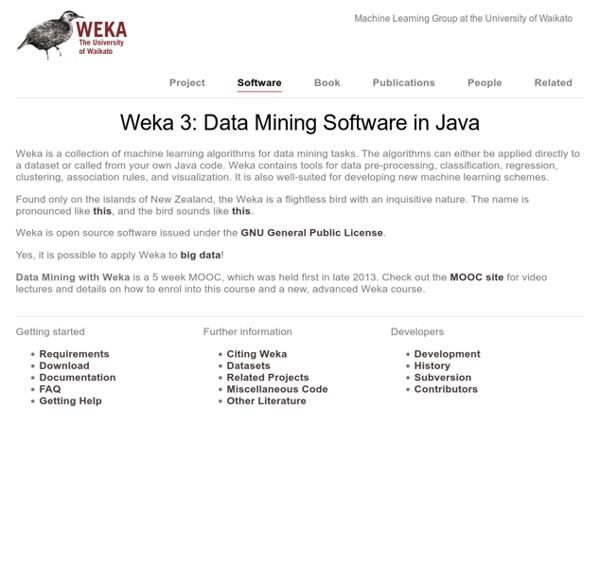 Weka is a collection of machine learning algorithms for data mining tasks. The algorithms can either be applied directly to a dataset or called from your own Java code. Weka contains tools for data pre-processing, classification, regression, clustering, association rules, and visualization. It is also well-suited for developing new machine learning schemes. Found only on the islands of New Zealand, the Weka is a flightless bird with an inquisitive nature. Weka is open source software issued under the GNU General Public License. Yes, it is possible to apply Weka to big data! Data Mining with Weka is a 5 week MOOC, which was held first in late 2013.

Healthcare Reform May Not Improve Medical Bills A healthcare reform study in Massachusetts reported more people covered under insurance did not improve medical debts for them. Tuesday the American Journal of Medicine published these findings which looked at Massachusetts healthcare reform,modeled after President Barack Obamas national plan that was passed last year. Advocators for the national healthcare reform claimed it would reduce medical bankruptcy. "These data suggest that reducing medical bankruptcy rates in the United States will require substantially improved -- not just expanded -- insurance," authors wrote. Researchers took a random sample of Massachusetts bankruptcy filers in July 2009 and sent surveys to 500 households. The Massachusetts healthcare reform was implemented in 2008,so they compared their data to 2007 information. Medical bills were still 52.9 percent of all bankruptcies in the state, although the percent was slightly down. "We need to reduce limits on deductibles and out-of-pocket costs," said Dr.

The R Project for Statistical Computing Octave GNU Octave is a high-level interpreted language, primarily intended for numerical computations. It provides capabilities for the numerical solution of linear and nonlinear problems, and for performing other numerical experiments. It also provides extensive graphics capabilities for data visualization and manipulation. Octave is distributed under the terms of the GNU General Public License. Version 4.0.0 has been released and is now available for download. An official Windows binary installer is also available from A list of important user-visible changes is availble at by selecting the Release Notes item in the News menu of the GUI, or by typing news at the Octave command prompt. Thanks to the many people who contributed to this release! Weka---Machine Learning Software in Java | Free software downloads

Data Mining Algorithms In R In general terms, Data Mining comprises techniques and algorithms, for determining interesting patterns from large datasets. There are currently hundreds (or even more) algorithms that perform tasks such as frequent pattern mining, clustering, and classification, among others. Understanding how these algorithms work and how to use them effectively is a continuous challenge faced by data mining analysts, researchers, and practitioners, in particular because the algorithm behavior and patterns it provides may change significantly as a function of its parameters. In practice, most of the data mining literature is too abstract regarding the actual use of the algorithms and parameter tuning is usually a frustrating task. On the other hand, there is a large number of implementations available, such as those in the R project, but their documentation focus mainly on implementation details without providing a good discussion about parameter-related trade-offs associated with each of them.

Apache Mahout: Scalable machine learning and data mining GGobi data visualization system. Togaware: One Page R: A Survival Guide to Data Science with R Step-by-Step Guide to Setting Up an R-Hadoop System - RDataMining.com: R and Data Mining 1. Set up single-node Hadoop If building a Hadoop system for the first time, you are suggested to start with a stand-alone mode first, and then switch to pseudo-distributed mode and cluster (fully-distributed) mode. 1.1 Download Hadoop Download Hadoop from and then unpack it. 1.2 Set up Hadoop in standalone mode 1.2.1 Set JAVA_HOME In file conf/hadoop_env.sh, add the line below: export JAVA_HOME=/Library/Java/Home 1.2.2 Set up remote desktop and enabling self-login Open the “System Preferences” window, and click “Sharing”“ (under "Internet & Wireless”). After that, save authorized keys so that you can log in localhost without typing a password. ssh-keygen -t rsa -P "" cat $HOME/.ssh/id_rsa.pub >> $HOME/.ssh/authorized_keys The above step to set up remote desktop and self-login was picked up from which provides detailed instructions to set up Hadoop on Mac. 3.