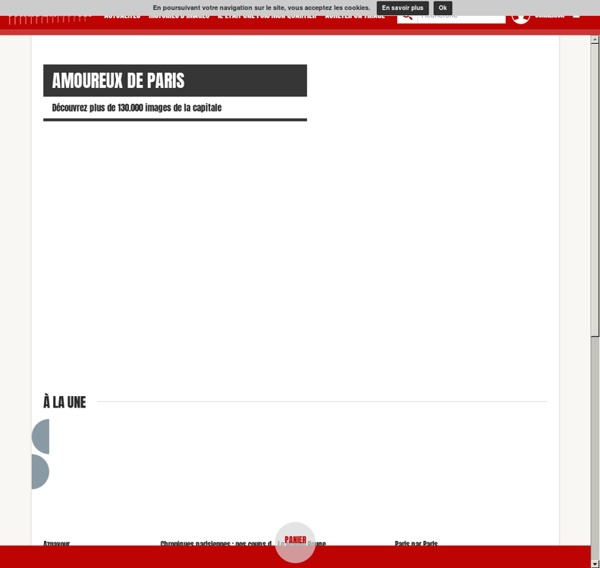 Off grid Off-grid Material collection for architectural purposes Materials: Plastic and aluminium sheets Off-grid materials will bring a temporary experience. During the day the light changes constantly. The War Against Photography in Analogue Lifestyle in Magazine We've all heard and experienced it one time time or another. You're just minding your own business taking a few snapshots with your Lomo cameras when out of nowhere, uniformed individuals accost you and demand that you either show them a permit or stop shooting. This is the war against photography. Know your rights! Over the past two years, photography has enjoyed an exponential boom in interest, with everyone and their grandmas brandishing point & shoot digital cameras, DSLRs, and even the ubiquitous Iphone. But in line with this surge in popularity, there have been numerous accounts and cases of photographers, professional or otherwise, being accosted and even abused by the police and security guards.

18 Paintings You Won't Believe Aren't Photos Some paintings seem SO real, you can’t believe someone was talented enough to create them. Then, some paintings seem SO real you can’t even tell they are paintings. Below are 21 of the most amazing works of art you won’t be able to tell are 100% handmade and NOT photographs. These artists are so talented, they’ll leave your jaw on the floor. 1. Omar Ortiz – using oil on linen : A minimal bronze partition wall in a high end apartment After visiting Milan and attending some trend lectures, where many of the new projects, new designs, ideas and installations as seen in Milan were discussed again I recognize a lot of the trends we will see more of in 2019 in this apartment. Less is more Less is more and minimalism are keywords in Ula's design, one of the reasons she actually contacted me to present her projects is our common love for this she told me. In 2019 minimalism is something we will see a lot more off, lucky me! When adapting minimalism into your home, the focus will be more on the few things we allow in our homes, something I am shouting out for years as my personal favourite way of living and decorating my home. Another trend I recognize in Ula's drawing for the apartment and pointed out by Monique van de Reijden at a Dutch Elle Decoration Trend watching event the other day, is the spiral staircase, the club chairs and the colourful soft chairs around the table. All pictures are ©Ula Burgiel

Before and After Shots of Joggers Last summer, Sacha Goldberger decided he would take on a very interesting project. He assembled a team who helped him create an outdoor studio at Bois de Boulogne, a park located near Paris that's 2 1/2 times the size of New York's Central Park. He stopped joggers, asking them for a favor - would they sprint for him and then pose right after for his camera? Many obliged. Out of breath, these joggers showed an overwhelming amount of fatigue on their faces. Goldberger then asked these same people to come into his professional studio exactly one week later. What English Sounds Like to People Who Don't Speak It Because I'm sick in bed with nothing to do, I have interpreted the dialogue. Ready? Read along, kids:

Suspension laiton Mediterranea - Fabrication française - Petite Friture ® ENVIRONNEMENT : Intérieur FABRICATION : France Laiton brossé ou peintCâble transparent 2 mPlafonnier en laiton brossé DIMENSIONS :Suspension 1m dimmableL: 100,5 cm | 39.6 inchW: 18 cm | 7.1 inchH: 15 cm | 5.9 inchPOIDS: 4 kg | WEIGHT: 8.8 lb packagingL: 109 cm | 42.9 inchW: 25 cm | 9.9 inchH: 30 cm | 11.8 inchPOIDS: 4,7 kg | WEIGHT: 10.4 lb Suspension 1,6m dimmable :L: 160 cm | 63 inchW: 18 cm | 7.1 inchH: 15 cm | 5.9 inchPOIDS: 6 kg | WEIGHT: 13.2 lb Hiroshima and Nagasaki Produced by Kate Phillips, Magnum Photos Hiroshima and Nagasaki Interactive Essay Amazing Video: A Year In The Life Of The Sky: 360 Panels Show A Day Time Lapse Of The Sky And A Year In Under 5 Minutes Each panel shows one day. With 360 movie panels, the sky over (almost) an entire year is shown in time lapse format as recorded by a video camera on the roof of the Exploratorium museum in San Francisco, California. The camera recorded an image every 10 seconds from before sunrise to after sunset and from mid-2009 to mid-2010. A time stamp showing the local time of day is provided on the lower right. The videos are arranged chronologically, with July 28 shown on the upper left, and January 1 located about about half way down.

100 Abandoned Houses - Kevin Bauman Photography To see the entire series, or to purchase prints from the series, please go to: www.100abandonedhouses.com The abandoned houses project began innocently enough roughly ten years ago. I actually began photographing abandonment in Detroit in the mid 90's as a creative outlet, and as a way of satisfying my curiosity with the state of my home town. Carlo Van de Roer's Auracam 6000 photographs capture the colors of a person's soul By Daily Mail Reporter Published: 01:54 GMT, 21 July 2013 | Updated: 14:01 GMT, 21 July 2013 Carlo Van de Roer doesn't just capture a person when he takes their photograph, he captures the color of their soul. In his psychedelic collection of images, the New Zealand-born snapper used an AuraCam 6000 camera to tune into the colors - or aura - that surround his different subjects - and the result is nothing short of spectacular. The innovative camera gathers biofeedback through hand sensors that measure the electromagnetic fields emitted from the person he's shooting. Miranda July, 2009

The meaning of 9/11's most controversial photo In the photograph Thomas Hoepker took on 11 September 2001, a group of New Yorkers sit chatting in the sun in a park in Brooklyn. Behind them, across brilliant blue water, in an azure sky, a terrible cloud of smoke and dust rises above lower Manhattan from the place where two towers were struck by hijacked airliners this same morning and have collapsed, killing, by fire, smoke, falling or jumping or crushing and tearing and fragmentation in the buildings' final fall, nearly 3,000 people. Ten years on, this is becoming one of the iconic photographs of 9/11, yet its history is strange and tortuous. Hoepker, a senior figure in the renowned Magnum photographers' co-operative, chose not to publish it in 2001 and to exclude it from a book of Magnum pictures of that horribly unequalled day. Only in 2006, on the fifth anniversary of the attacks, did it appear in a book, and then it caused instant controversy.