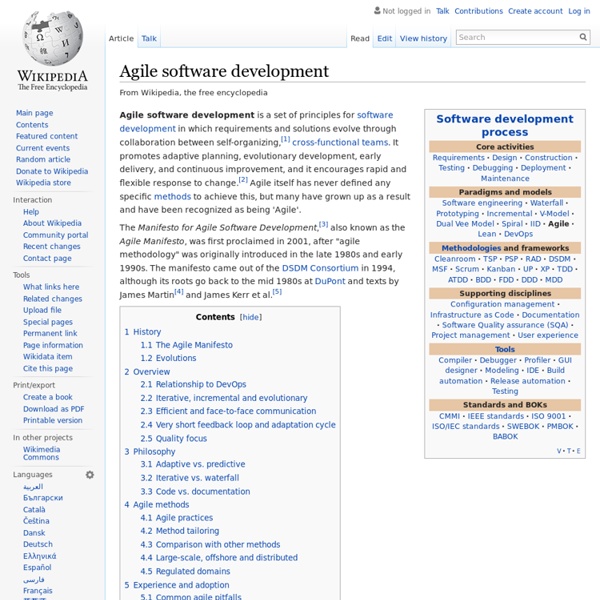 Agile software development is a set of principles for software development in which requirements and solutions evolve through collaboration between self-organizing,[1] cross-functional teams. It promotes adaptive planning, evolutionary development, early delivery, and continuous improvement, and it encourages rapid and flexible response to change.[2] Agile itself has never defined any specific methods to achieve this, but many have grown up as a result and have been recognized as being 'Agile'. The Manifesto for Agile Software Development,[3] also known as the Agile Manifesto, was first proclaimed in 2001, after "agile methodology" was originally introduced in the late 1980s and early 1990s. The manifesto came out of the DSDM Consortium in 1994, although its roots go back to the mid 1980s at DuPont and texts by James Martin[4] and James Kerr et al.[5] History[edit] Incremental software development methods trace back to 1957.[6] In 1974, E. The Agile Manifesto[edit] Agile principles[edit]

Keyboard + Mouse or Die, PC Gaming Community Welcome to the March version of our PC build guides. As with before, we have implemented hard price limits ($500, $800, $1300, $1800) on ourselves and have had to make tough decisions with each build. Your personal budget will likely be flexible, but we hope this article will give you a baseline. You can of course spend more or spend less, but you run into a case of diminishing returns at either end. Please keep in mind that pricing information is immediate and may not necessarily reflect real prices by the time you have read this article.

User story History[edit] User stories originated with Extreme Programming (XP), whose first written description in 1998 only claimed that customers defined project scope "with user stories, which are like use cases". Rather than offered as a distinct practice, they were described as one of the "game pieces" used in the planning game. However, most of the further literature thrust around all the ways arguing that user stories are "unlike" use cases, in trying to answer in a more practical manner "how requirements are handled" in XP and more generally Agile projects. This drives the emergence, over the years, of a more sophisticated account of user stories. [1] In 2001, Ron Jeffries proposed the well-known Three C's formula, i.e. Profiling (computer programming) Profiling is achieved by instrumenting either the program source code or its binary executable form using a tool called a profiler (or code profiler). Profilers may use a number of different techniques, such as event-based, statistical, instrumented, and simulation methods. "Program analysis tools are extremely important for understanding program behavior. Computer architects need such tools to evaluate how well programs will perform on new architectures. Software writers need tools to analyze their programs and identify critical sections of code.

Agile Principles and Values, by Jeff Sutherland Individuals and interactions are essential to high-performing teams. Studies of "communication saturation" during one project showed that, when no communication problems exist, teams can perform 50 times better than the industry average. To facilitate communication, agile methodologies rely on frequent inspect-and-adapt cycles. These cycles can range from every few minutes with pair programming, to every few hours with continuous integration, to every day with a daily standup meeting, to every iteration with a review and retrospective. Just increasing the frequency of feedback and communication, however, is not enough to eliminate communication problems. These inspect-and-adapt cycles work well only when team members exhibit several key behaviors:

Principles behind the Agile Manifesto We follow these principles: Our highest priority is to satisfy the customer through early and continuous delivery of valuable software. Welcome changing requirements, even late in development. Agile processes harness change for the customer's competitive advantage. Deliver working software frequently, from a couple of weeks to a couple of months, with a preference to the shorter timescale. Business people and developers must work together daily throughout the project.

Lean Startup Lean startup is a methodology for developing businesses and products. The methodology aims to shorten product development cycles by adopting a combination of business-hypothesis-driven experimentation, iterative product releases, and validated learning. The central hypothesis of the lean startup methodology is that if startup companies invest their time into iteratively building products or services to meet the needs of early customers, they can reduce the market risks and sidestep the need for large amounts of initial project funding and expensive product launches and failures.[1][2] History[edit] Although the lost money differed by orders of magnitude, Ries concluded that the failures of There, Inc. and Catalyst Recruiting shared similar origins: "it was working forward from the technology instead of working backward from the business results you're trying to achieve.

Continuous delivery Continuous Delivery (CD) is a design practice used in software development to automate and improve the process of software delivery. Techniques such as automated testing, continuous integration and continuous deployment allow software to be developed to a high standard and easily packaged and deployed to test environments, resulting in the ability to rapidly, reliably and repeatedly push out enhancements and bug fixes to customers at low risk and with minimal manual overhead. The technique was one of the assumptions of extreme programming but at an enterprise level has developed into a discipline of its own, with job descriptions for roles such as "buildmaster" calling for CD skills as mandatory. Principles[edit] Continuous delivery treats the commonplace notion of a deployment pipeline[1] as a lean Poka-Yoke: a set of validations through which a piece of software must pass on its way to release. Implementation and usage[edit]

Agile Software Is A Cop-Out; Here’s What’s Next Never has a new trend annoyed me as much as Agile. Right from the get-go, the Agile Manifesto revealed the weaknesses and immaturity of the founding principles. The two most disturbing: “Working software is the primary measure of progress” and “Business people and developers must work together daily throughout the project.”

Here's What The Average Tech Startup Looks Like Between reading GeekWire every day, watching the Tech Stars Seattle Demo Day pitches, seeing the latest infographic from Gist, talking to Angels and VCs, and discussions with fellow venture backed entrepeneurs, I have lately been wondering what the “average” tech startup looks like today. It is a lot smaller than I had thought. To help answer this question, I turned to the detailed information published on the Tech Stars web site. This is a treasure trove of statistics, listing 104 graduate startups, from the initial 2007 class in Boulder to the Spring 2011 classes in Boulder, Boston, and New York (including 2010 Seattle, but not the Fall 2011 Seattle graduates). Unfortunately, YCombinator and 500 Startups do not post equivalent data on their 350+ similar graduates, but 104 is quite a good sample size. First to note, is that although Tech Stars is five years old, 84 of the 104 companies listed are less than three years old.