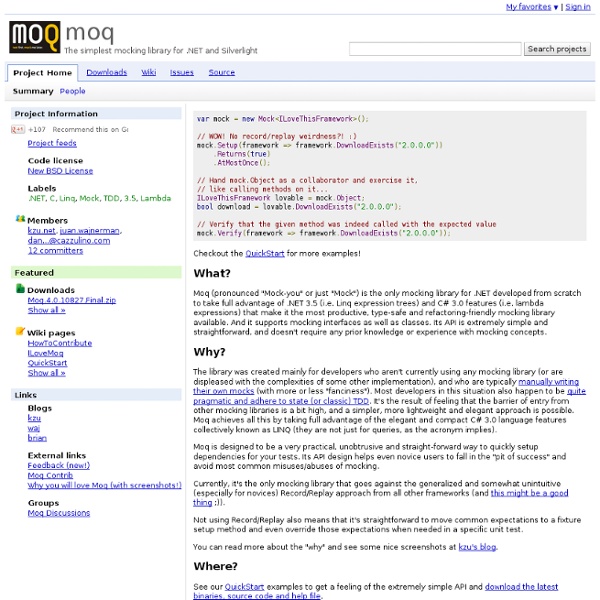 Math.NET Numerics markdownsharp - Project Hosting on Google Code Open source C# implementation of Markdown processor, as featured on Stack Overflow. This port is based heavily on the original Perl 1.0.1 and Perl 1.0.2b8 implementations of Markdown, with bits and pieces of the apparently much better maintained PHP Markdown folded into it. There are a few Stack Overflow specific modifications (which are all configurable, and all off by default). I'd like to ensure that this version stays within shouting distance of the Markdown "specification", such as it is... You'll need to know: C# Regular Expressions (I mean really freaking know them -- the original Markdown implementation was in Perl. If you'd like to contribute file issues and attach *.patch files of proposed fixes. Please note that as of January 8, 2011 MarkdownSharp uses Mercurial for version control; the old Subversion repository will not be updated anymore. Tests I pulled in the MDTest 1.1 test suite, along with some very rudimentary unit tests of my own. Benchmarks Markdown.NET MarkdownSharp v1.12

Fun With .NET Regex Balancing Groups Wednesday, January 23rd, 2008 • Related • Filed Under The .NET Framework's regular expression package includes a unique feature called balancing groups, which is a misnomer since although they can indeed be used to match balanced constructs, that's not all they're good for and really has nothing to do with how they work. Unfortunately, balancing groups are quite poorly documented. Note: If you're reading this in a feed reader or aggregator, see the original post, which uses regex syntax highlighting to hopefully make things easier to follow. (? I'm not a .NET coder, but I recognize the potential of this functionality. First, here's a simple example of using balancing groups outside the context of recursion and nested constructs. ^(? A few notes about the above regex: (? Although there's no way to determine the height of the Counter stack from within the regex, you can directly manipulate that number by incrementing or decrementing it by set amounts. ^(? (? \( (? << (? (?

CLR Hosting - part 3 (memory management) Sunday, July 24, 2005 12:54 AM bart Introduction A first specific aspect of CLR Hosting I want to cover in this blog post series is the memory management part of the CLR Hosting APIs. It all started some years ago when the SQL Server team started to look at the possibilities to integrate the CLR into the SQL Server database engine to give developers the opportunity to use their knowledge of managed code development to extend the functionality of the database, by writing things such as stored procedures, triggers, user defined functions, user defined types in their favorite languages. However, integrating the CLR in a product like SQL Server which has very high needs on the field of performance, scalability, reliability and data integrity (transactions you know) is not as easy as it might look in the first place. Case study: How SQL Server manages memory I won't cover the heap and shared memory in much detail over here. Controlling Virtual Memory Heap management File mapping