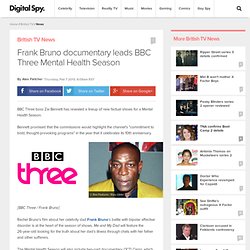 Bennett promised that the commissions would highlight the channel's "commitment to bold, thought-provoking programs" in the year that it celebrates its 10th anniversary. © Rex Features / Rory Gilder [BBC Three / Frank Bruno] Rachel Bruno's film about her celebrity dad Frank Bruno's battle with bipolar affective disorder is at the heart of the season of shows. Me and My Dad will feature the 26-year-old looking for the truth about her dad's illness through chats with her father and other sufferers.

Inside a Teenage Mental Health Unit is a look inside the McGuinness Unit in Manchester for a year, exploring how patients and staff deal with issues such as psychosis, eating disorders, OCD and self-harm. Frank Bruno documentary leads BBC Three Mental Health Season - TV News. The Disappearing Male. The Disappearing Male is about one of the most important, and least publicized, issues facing the human species: the toxic threat to the male reproductive system. 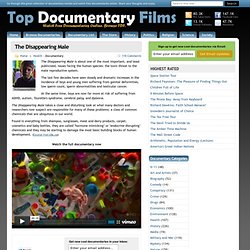 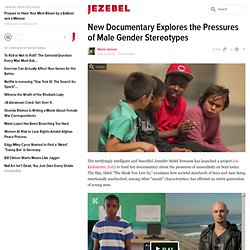 The Patriarchy hurts everyone. Ugh. Even though women and trans* persons tend to have it a hell of a lot worse in our society, I really do feel sorry for cis men growing up these days. The ones just starting to come to terms with their identity. We Need to Talk about Dad - 4oD. Parental Control HistoryCloseSign in to get the most from 4oD History View your own personal 4oD history, useful if you share a computerKeep track of the last 50 shows you watched or started watchingResume unfinished shows from the point you stopped watching FavouritesCloseStart using Favourites today Look out for the add to Favourites button as you browse the siteUse the buttons to create a list of all your favourite showsNew 4oD episodes are flagged here so you don't miss out Programme Unavailable This programme is not currently available on 4oD. 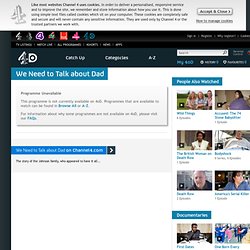 Programmes that are available to watch can be found in Browse All or A-Z. For information about why some programmes are not available on 4oD, please visit our FAQs. There is already a Channel 4 account registered to {| current_emailAddress |} Stop Telling Women to Smile: Around The Country by Tatyana Fazlalizadeh. Stop Telling Women to Smile is a public art series that addresses gender based street harassment. 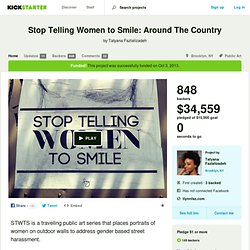 The work consists of drawn portraits of women who have told their stories of harassment, and wheat pasting those portraits as posters with captions that speak directly to offenders on outdoor walls. I started this project as a way to explore social activism through public art. Breaking A Taboo: "You Are Not Alone" Documentary Spotlights Depression Among Black Gay Men. Depressed Black Gay Men (DBGM), a non-profit organization committed to helping raise awareness of depression, will premier its latest documentary, “You Are Not Alone,” this Saturday at the Malcolm X and Dr. 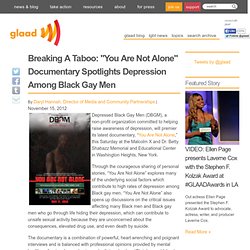 Betty Shabazz Memorial and Educational Center in Washington Heights, New York. Through the courageous sharing of personal stories, “You Are Not Alone” explores many of the underlying social factors which contribute to high rates of depression among Black gay men. “You Are Not Alone” also opens up discussions on the critical issues affecting many Black men and Black gay men who go through life hiding their depression, which can contribute to unsafe sexual activity because they are unconcerned about the consequences, elevated drug use, and even death by suicide. The documentary is a combination of powerful, heart wrenching and poignant interviews and is balanced with professional opinions provided by mental health professionals, academics and religious leaders (Christian and Islam). Gay men, depression, anxiety and the struggle for everyday happiness. Gay men, depression, anxiety and the struggle for everyday happiness. The Trouble With Men. Men tend to ‘self-medicate’ rather than seeking medical help for depression, experts say. 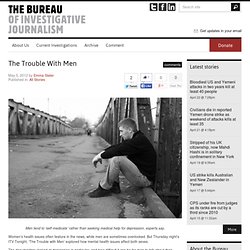 Women’s health issues often feature in the news, while men are sometimes overlooked. But Thursday night’s ITV Tonight, ‘The Trouble with Men’ explored how mental health issues affect both sexes. The documentary looked at depression in particular, and how difficult it can be for men to talk about their emotions. It asserted that there has long been a stigma attached to the disease, which, some believe, is more debilitating for men than women. Bath Rugby prop Duncan Bell suffered from depression for 10 years before seeking help. ‘I used to think…that depression is a weakness, and you need to smile and how hard can that be? Paul Gilbert, professor of clinical psychology, further explained the symptoms: ‘You lose the ability to enjoy things, to look forward to things. 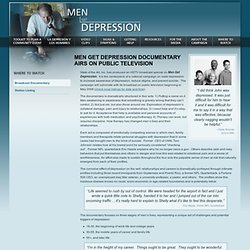 It was just difficult for him to hear it and it was difficult for me to say it in a way that was effective, because clearly nagging wouldn’t be helpful.” –Claire Broome John’s Wife State of the Art, Inc. has produced an HDTV broadcast special on Men Get Depression. It is the centerpiece of a national campaign on male depression to increase awareness of depression, reduce stigma, and prevent suicide. The campaign will culminate with its broadcast on public television beginning in May 2008 (check local listings for date and time). The documentary is dramatically structured in four acts: 1) Putting a name on it.