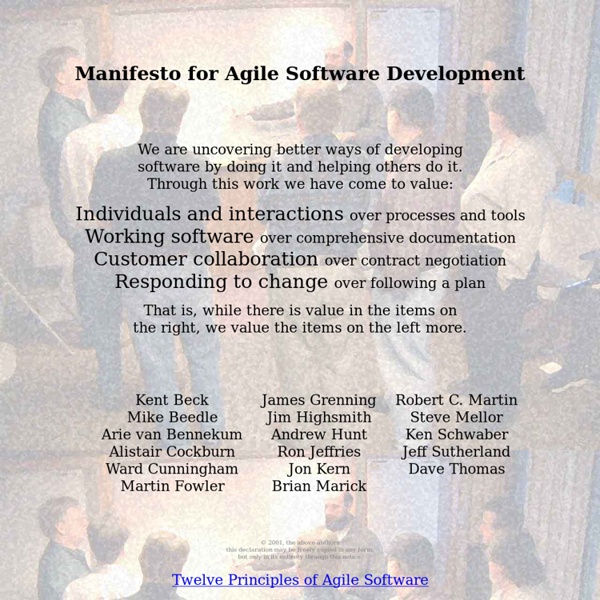 We are uncovering better ways of developingsoftware by doing it and helping others do it.Through this work we have come to value: Individuals and interactions over processes and toolsWorking software over comprehensive documentationCustomer collaboration over contract negotiationResponding to change over following a plan That is, while there is value in the items onthe right, we value the items on the left more. © 2001, the above authorsthis declaration may be freely copied in any form, but only in its entirety through this notice. Twelve Principles of Agile Software Become a SignatoryView Signatories

Principles behind the Agile Manifesto We follow these principles: Our highest priority is to satisfy the customer through early and continuous delivery of valuable software. Welcome changing requirements, even late in development. Agile processes harness change for the customer's competitive advantage. Deliver working software frequently, from a couple of weeks to a couple of months, with a preference to the shorter timescale.

FBI Sentinel Project Executive Summary: Virtual Case File (or VCF) was a software application developed by the United States Federal Bureau of Investigation(FBI) between 2000 and 2005. The project was not close to completion when it was officially abandoned in January 2005, having turned into a complete fiasco for the FBI. In addition to wasting at least US $100 million, the failure brought widespread criticism to the bureau and its director, Robert S. User Stories and User Story Examples by Mike Cohn What is a user story? User stories are short, simple descriptions of a feature told from the perspective of the person who desires the new capability, usually a user or customer of the system. They typically follow a simple template: As a < type of user >, I want < some goal > so that < some reason >. User stories are often written on index cards or sticky notes, stored in a shoe box, and arranged on walls or tables to facilitate planning and discussion. As such, they strongly shift the focus from writing about features to discussing them.

Michael Wesch Michael Lee Wesch (born June 22, 1975) is associate professor of cultural anthropology at Kansas State University. Wesch's work also includes media ecology and the emerging field of digital ethnography, where he studies the effect of new media on human interaction. Wesch is a cultural anthropologist and media ecologist exploring the effects of new media on human interaction. He graduated summa cum laude from the Kansas State University Anthropology Program in 1997 and returned as a faculty member in 2004 after receiving his PhD in Anthropology at the University of Virginia.[1] There he pursued research on social and cultural change in Melanesia, focusing on the introduction of print and print-based practices like mapping and census-taking in the remote Mountain Ok region of Papua New Guinea where he lived for a total of 18 months from 1999-2003. This work inspired Wesch to examine the effects of new media more broadly, especially digital media.

Agile CultureCon 2012: Call for Speakers! Let’s Hack Culture! found on pinterest via 1000 cultural A few days ago I posted about CultureCon (Philly 9/12 and Boston 9/14), an upcoming event hosted by Agile Boston that’s focused on culture analysis, design and implementation in the workplace. The objective of the conference is to “bring to more popular awareness how culture is the gating factor in satisfaction, productivity and learning at work.” The premise is that agile and self-management principles are essentially a culture hack – meaning that if a group of people decide they’re willing to align around a set of values, principles, practices and processes, they can upgrade themselves to a high-functioning learning organization that continually adapts and upgrades itself. Next I could say some kind of sentence about how “in today’s fast-paced world, we can’t afford NOT to” …. etc etc.

Mike Cohn Mike Cohn, 2013 He has served as Vice President of Development at four different companies that successfully employed agile concepts and strategies and been a technology executive in companies of various sizes, from start-up to Fortune 40. Cohn is the author of Agile Estimating and Planning, User Stories Applied for Agile Software Development and Succeeding with Agile: Software Development using Scrum, as well as books on Java and C++ programming[4] and articles for Better Software, IEEE Computer, Software Test and Quality Engineering, Agile Times, Cutter IT Journal, and the C++ Users' Journal. He is also the editor of the Addison-Wesley Mike Cohn Signature Series of books. Cohn was a Keynote Speaker on ADAPTing to Agile for Continued Success at the Agile 2010 Presented by the Agile Alliance.[5] In 2012, Cohn was named #1 in The Top 20 Most Influential Agile People.[6]

The Burn-Down Chart: An Effective Planning and Tracking Tool Burn-downs charts are among the most common sprint tracking mechanisms used by Agile practitioners. Though their application and usage varies (some plot a burn-down chart using story points, whereas others use task count), plotting burn-down using effort remaining is the most effective and efficient way of using burn-down charts. This article looks at creating and updating a burn-down chart using the effort-remaining approach, interpreting burn-down under different scenarios, and examining common mistakes to avoid while using burn-downs. We conclude by looking at some of the benefits of using this innovative tool. How to create a burn-down chart Jonathan Gay Jonathan Gay is an American computer programmer and software entrepreneur based in Northern California. Gay was a co-founder of FutureWave Software in 1993. For a decade, he was the main programmer and visionary of Flash, an animation editor for web pages. He founded Software as Art, which was later renamed Greenbox, which made energy management solutions for the home.

How To Prioritise Quickly And Intuitively If you’re in a situation where prioritisation is straightforward and you have a single decisive product owner, you probably need to read no further. If, however, prioritisation is difficult in your situation – maybe because you have several products or product owners with conflicting priorities, or maybe because your requirements can be complex and benefits rather intangible – this is for you. In this case, prioritisation can be difficult and priorities are not always immediately obvious. Agile software development Agile software development is a set of principles for software development in which requirements and solutions evolve through collaboration between self-organizing,[1] cross-functional teams. It promotes adaptive planning, evolutionary development, early delivery, and continuous improvement, and it encourages rapid and flexible response to change.[2] Agile itself has never defined any specific methods to achieve this, but many have grown up as a result and have been recognized as being 'Agile'. The Manifesto for Agile Software Development,[3] also known as the Agile Manifesto, was first proclaimed in 2001, after "agile methodology" was originally introduced in the late 1980s and early 1990s.

5 Common Mistakes We Make Writing User Stories Most of the issues with gathering requirements in agile software development and agile testing derive from issues with User Stories. Somehow expressing requirements in such a simple form causes a lot of trouble to agile teams. Of course art of writing good User Stories is the most difficult for new teams starting with a new agile project or these, which freshly transformed development methods to agile software development methodologies. Mistakes made at that point lead to wrong Test Cases, wrong understanding of requirements, and the worst of all wrong implementation which can be direct cause of rejecting the deliverables of the iteration. Lets take a look at the five most common mistakes people make writing User Stories. Introduction to User Stories

About Self Organizing Teams/ Posted 4/11/2016 12:05:46 PM by CLEMENTINO DE MENDONCA, Professional Scrum Trainer with Scrum.org A question from a budding Scrum Master, who is transitioning from a background as a traditional project manager: “In order to promote team bonding and self-organization, from now on I am going to try something new with the team. In the sprint planning meeting, instead of me breaking down the tasks for user stories between each team member, I am going to just identify tasks and hours needed and leave it at that, and then I will ask each team member to “pick” tasks from the sprint backlog on their own, and later, as soon as they complete a previously picked task.” Brad Fitzpatrick Bradley Joseph "Brad" Fitzpatrick (born February 5, 1980 in Iowa), is an American programmer. He is best known as the creator of LiveJournal and is the author of a variety of free software projects such as memcached and OpenID. Born in Iowa, Fitzpatrick grew up in Beaverton, Oregon and majored in computer science at the University of Washington in Seattle.