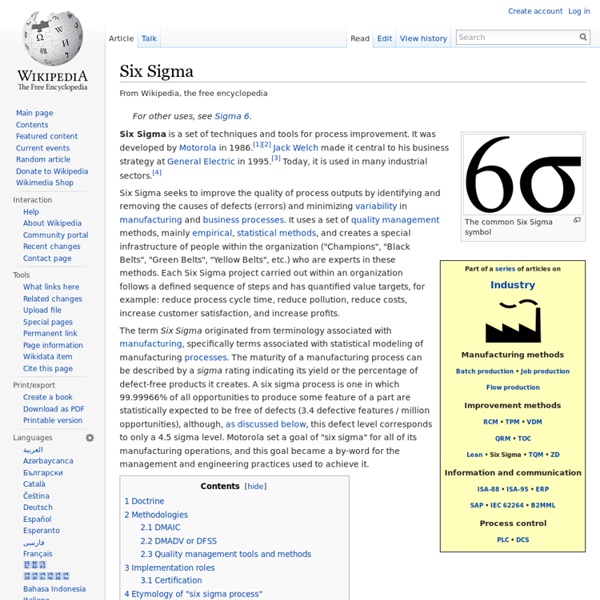 The common Six Sigma symbol Six Sigma is a set of techniques and tools for process improvement. It was developed by Motorola in 1986.[1][2] Jack Welch made it central to his business strategy at General Electric in 1995.[3] Today, it is used in many industrial sectors.[4] Six Sigma seeks to improve the quality of process outputs by identifying and removing the causes of defects (errors) and minimizing variability in manufacturing and business processes. It uses a set of quality management methods, mainly empirical, statistical methods, and creates a special infrastructure of people within the organization ("Champions", "Black Belts", "Green Belts", "Yellow Belts", etc.) who are experts in these methods. Each Six Sigma project carried out within an organization follows a defined sequence of steps and has quantified value targets, for example: reduce process cycle time, reduce pollution, reduce costs, increase customer satisfaction, and increase profits. Doctrine[edit] Methodologies[edit]

Lean manufacturing Overview[edit] The difference between these two approaches is not the goal itself, but rather the prime approach to achieving it. The implementation of smooth flow exposes quality problems that already existed, and thus waste reduction naturally happens as a consequence. The advantage claimed for this approach is that it naturally takes a system-wide perspective, whereas a waste focus sometimes wrongly assumes this perspective. Both lean and TPS can be seen as a loosely connected set of potentially competing principles whose goal is cost reduction by the elimination of waste.[5] These principles include: Pull processing, Perfect first-time quality, Waste minimization, Continuous improvement, Flexibility, Building and maintaining a long term relationship with suppliers, Autonomation, Load leveling and Production flow and Visual control.

Ishikawa diagram Ishikawa diagrams (also called fishbone diagrams, herringbone diagrams, cause-and-effect diagrams, or Fishikawa) are causal diagrams created by Kaoru Ishikawa (1968) that show the causes of a specific event.[1][2] Common uses of the Ishikawa diagram are product design and quality defect prevention, to identify potential factors causing an overall effect. Each cause or reason for imperfection is a source of variation. Causes are usually grouped into major categories to identify these sources of variation. The categories typically include: Overview[edit] Ishikawa diagram, in fishbone shape, showing factors of Equipment, Process, People, Materials, Environment and Management, all affecting the overall problem.

Sampling Distribution Suppose that we draw all possible samples of size n from a given population. Suppose further that we compute a statistic (e.g., a mean, proportion, standard deviation) for each sample. The probability distribution of this statistic is called a sampling distribution. Variability of a Sampling Distribution A Gamification Framework for Interaction Designers Gamification is a hot topic. Missed it? On Google Trends it first appeared as a blip in late October 2010 and then took off in January so quickly that it appeared on NPR’s Weekend Edition in March. Customer lifetime value In marketing, customer lifetime value (CLV) (or often CLTV), lifetime customer value (LCV), or user lifetime value (LTV) is a prediction of the net profit attributed to the entire future relationship with a customer. The prediction model can have varying levels of sophistication and accuracy, ranging from a crude heuristic to the use of complex predictive analytics techniques. One of the first accounts of the term Customer Lifetime Value is in the 1988 book Database Marketing, which includes detailed worked examples.[2] Purpose[edit]

NetLogo Home Page NetLogo is a multi-agent programmable modeling environment. It is used by tens of thousands of students, teachers and researchers worldwide. It also powers HubNet participatory simulations. It is authored by Uri Wilensky and developed at the CCL. You can download it free of charge. What can you do with NetLogo? s Wi-Fi-Enabled Security And Automation Products Create A “Connected Home” For Busy Homeowners LYNX Touch 5100 and Tuxedo Touch™ Wi-Fi Leverage Honeywell’s Legacy in Security, Home Comfort CEA LINE SHOW, NEW YORK (June 27, 2012) – For busy parents who can’t be two places at once, the next best thing is a home that can tell you what’s going on with it, and can be controlled with a smart phone, tablet or other web-enabled device. This week, Honeywell ( NYSE: HON ) is rolling out two new security and home automation products to make homes smarter: LYNX Touch 5100 and Tuxedo Touch Wi-Fi home controller.

Systems thinking Impression of systems thinking about society[1] A system is composed of interrelated parts or components (structures) that cooperate in processes (behavior). Natural systems include biological entities, ocean currents, the climate, the solar system and ecosystems. Designed systems include airplanes, software systems, technologies and machines of all kinds, government agencies and business systems.