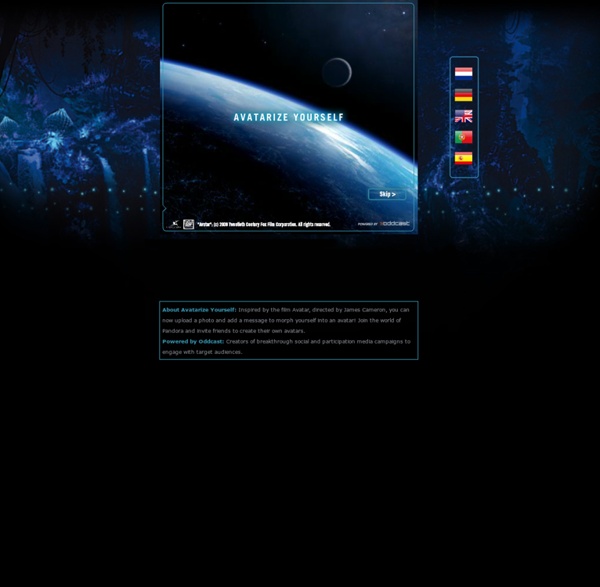 Create Avatar Want to turn a photo or picture into an Avatar for your favourite Forum? Then you have found the place to do it! Creating an Avatar has never been easier - We have made it as simple as 1, 2, 3 for you to turn your photo in to an avatar on a Forum or Bulletin Board. I hear you asking So what is different than just shrinking a picture? deturl.com - download YouTube videos. Just type 'pwn' to download YouTube videos details Download a video from any web page. Support for DailyMotion, Facebook, MetaCafe, FunnyOrDie, Vimeo, MegaVideo, and many others.

Create Avatar - Cartoon Avatar Generator by Create My Picture Create cool avatars! Make and Email your funny avatar to friends, family or just about anyone using the email box above - Simply enter yours or a friends address and click the 'email' icon. The box: 'from your name or address' will say who the avatar is from - Simply enter your name or email address if you are sending it to someone else.

Pixel Art Avatar Icon Generator -Icon Generators- Pixel Art Avatar Icon Maker. Pixel Art Avatar Generator. Behavior on a smartphone is not guaranteed. This Flash is not displayed correctly in certain browsers. If this happens, please try using the Low Quality Version of this page. Most Popular TV Shows Coronation Street Coronation Street is credited as being one of the longest running soaps in the world and the longest running television soap in Britain (with the longest running overall being The Archers on BBC radio). The show has been on British TV screens since 1960 and has aired over 6,000 episodes. 10 Movies That Will Make You Go "Huh?" When you watch a lot of movies, every once in a while you’ll come across one that baffles you, and the range of reactions to this encounter are pretty fascinating. These types of movies aren’t simply the mindtrip types of movies like Inception or Memento that are labyrinthine in terms of their plot progression but are fairly clear by the end in what they’re about. Truly confusing movies, the type where you’re left wondering what the hell you just watched and what the point of it even being made could have been, can create responses anywhere from anger and resentment towards seemingly pretentious filmmakers to delight in the abstract, personal meaning a viewer can derive from something deliberately vague or opaque. I watched Upstream Color recently.

avatarcore - Generic framework for describing and displaying avatar characters The Avatar Core framework is used to construct and display avatar characters from individual avatar assets (eyes, nose, mouth, etc.) and, typically, an XML descriptor file describing their relationships. The framework supports the use of libraries for predefined selections of interchangeable characteristics, each of which whose graphical assets can be either defined within the hosted client application or loaded in dynamically at runtime. The XML descriptors make it easy to load, edit, and save avatar definitions to be used at a later time. The current implementation is done in ActionScript targeting Adobe's Flash Player. Additional details regarding the framework is discussed in the Introduction section. For more information on how to get started with Avatar Core, see GettingStarted.

What To Watch On Netflix, Part 3: Overlooked Gems Now that I've got the Classics and the Pretty Good Bets lists out of the way, welcome to my list of Netflix's Overlooked Gems. This was the Netflix recommendation roster I had the most fun compiling (it's not every day that having watched so much cult TV comes in handy). Adding to the fun: This list comes with a cherry on top, in the form of some exciting news.