Symbols and their meaning 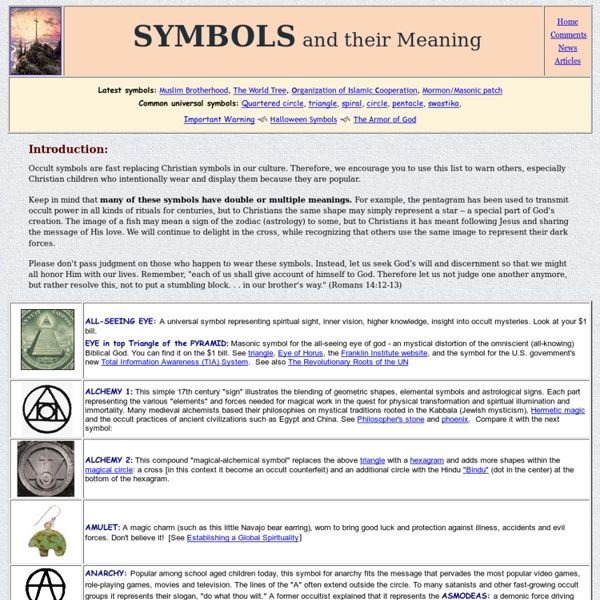 Introduction: Occult symbols are fast replacing Christian symbols in our culture. Therefore, we encourage you to use this list to warn others, especially Christian children who intentionally wear and display them because they are popular. Keep in mind that many of these symbols have double or multiple meanings. For example, the pentagram has been used to transmit occult power in all kinds of rituals for centuries, but to Christians the same shape may simply represent a star -- a special part of God's creation. Warning Concerning Symbols In the world of the occult, many symbols are imbued with power by the magician working in conjunction with the demonic spirit world. You may want to read Popular Occultism and study the following Scriptures: 1 Corinthians 10:18-22; 2 Corinthians 6:14; Deuteronomy 4:15-24; Deuteronomy 32:16-19; 2 Thessalonians 2:7-12 Endnotes: 1.

Photos of Children From Around the World With Their Most Prized Possessions Chiwa – Mchinji, Malawi Shot over a period of 18 months, Italian photographer Gabriele Galimberti‘s project Toy Stories compiles photos of children from around the world with their prized possesions—their toys. Galimberti explores the universality of being a kid amidst the diversity of the countless corners of the world, saying, “at their age, they are pretty all much the same; they just want to play.” But it’s how they play that seemed to differ from country to country. Galimberti found that children in richer countries were more possessive with their toys and that it took time before they allowed him to play with them (which is what he would do pre-shoot before arranging the toys), whereas in poorer countries he found it much easier to quickly interact, even if there were just two or three toys between them. There were similarites too, especially in the functional and protective powers the toys represented for their proud owners. Stella – Montecchio, Italy Pavel – Kiev, Ukraine

Paper - Hermetic Meaning of the Sign of the Cross Gestures and symbols have always played a major part in the Western Mystery traditions. Yet, of all symbols, the cross has been the most prominent and influential in guiding western mystics towards cosmic consciousness. While seen as almost an exclusively Christian symbol, the cross has existed since the dawn of the mysteries. The Egyptian tau and anhk, the Cross of Christ's Passion, the Rosy Cross of the medieval and Rennaissance alchemists, to the post-Vatican Two cross of the Resurrected Savior, all are historical variations of the same symbol that has lead a large part of humanity on its path to God. Generally, the cross is seen as the linking of an upright line with a horizontal line, or the active (I) with the passive, or receptive (-). When these two forces are combined, we have the creation of a third force, idea, or entity. The earliest crosses were simply marked as (T) or (X). During the Middle Ages the cross became chiefly associated with the crucifixion of Christ.

Edible Light The Ancient Symbol of The Knights Templar’s Red Cross The symbol of the cross is universal. Whereas one can find many meanings to the plus sign, or symbol of the Cross, the historic background of famous Knights Templar’s Red Cross contains multiple wonders. The Templar’s Cross originally came from the “Mark of Cain”. The Mark of Cain is symbolized by a Red Cross surrounded by a Circle. What the Mark of Cain is can be allegorically found in the Genesis chapter of the Bible (Gen. 4:13-16). In Ancient Sumer, those who wore the “Mark of Cain”, showed they were protected by the “Lord” from the “wrath” of “Jehovah”. The symbol of the cross within a circle is very ancient and has played an important part in the History of Humanity. Two thousand years ago, Jesus traveled widely throughout the western world, the Middle East and eastward into India, in his spiritual quest to go beyond the state of Enlightenment and into the higher Consciousness levels of Creation.

Natacha Merritt Greek Cross (Cross Imissa, Cross of Earth) The Greek cross is a very early form of the Christian cross. Often found in conjunction with the ankh, the Greek cross predates the latin cross and was not intended to represent the cross of the crucifixion, but instead, the four directions of the earth, representing the spread of the gospel, and the four platonic elements. The Greek cross was a popular floor plan for eastern churches at one time. This style of cross dates to ancient Babylon, where it was a symbol of the sun-god Shamash. Alexandrian Cross between ankhs The Greek cross also has a hidden, esoteric meaning. Zodiac Cross Some variations on the greek cross: A greek cross within a square is usually taken to represent earthly affairs or the temporal authority of the Church. This style is called “voided,” and again symbolizes the four directions; it is sometimes interpreted to be composed of four turned Greek gammas (equivalent to the letter “g:”). Assyrian cross, 3000 BCE Related Symbols:

Your Personality Color To discover your personality color, ask yourself: what is my favorite color? Answer this question now before reading any further. Don't think about it, be spontaneous with your answer; accept the first color that comes into your mind and don't analyze your choice. It is this instinctual choice of a color that tells you a lot about yourself, how you function and how others see you. If you have two equally favorite colors, read the information on both to fully understand yourself and what motivates you. Your personality color does not have to be one you wear all the time; it is usually your favorite, the color that excites you the most and makes you feel alive when you see it. Dislike of a Color The colors you dislike can tell you a lot about yourself as well, often reflecting your weaknesses and vulnerabilities. Does everyone have a favorite color? Most of us do and many of us have had the same one since childhood. Have you changed your favorite color? The Colour of Sex