How has the nature of adventure changed since I first started doing it? Rambling away over a Guinness or two in a pub in Ireland. Watch the whole film on YouTube. *****Parking at the Grand Canyon, 1914. Mapping the Urban Bike Utopias of the 1890s. When you live in San Francisco, it’s not uncommon to see strange sights out your window. Once, I saw the mayor standing in the middle of the street, painting a bright green square on the asphalt.

This was a historic moment, I later learned—the inauguration of the city’s first “bike box,” a designated space for cyclists to wait at an intersection. That was in 2009. Cycling continued to grow in the following years. By 2015, San Franciscans took an estimated 82,000 bike trips per day, and the total length of the city’s bike lanes was 125 miles and growing. The popularity of cycling in cities around the country, advocates say, is an encouraging trend that reduces traffic congestion and air pollution and promotes healthful exercise. ***Conway's favourite places: He's walked the Nile & the Himalayas, now explorer @Levisonwood turns his attentions to the ganglands & jungles of Central America...

How good could an 18 quid package holiday really be? Holiday '71 went in search of some cheap winter sun #onthisday in, erm, 1971. @icey_mark and I'll never forget having the chance to drive one! Fortunately this dot seems to be in the right (godforsaken) place. Ray Mears. I've been watching Ray Mears' TV series for many years, and always admired his commitment to immersing himself in the societies that he visits, who live in the environments within which he practices his "bushcraft". 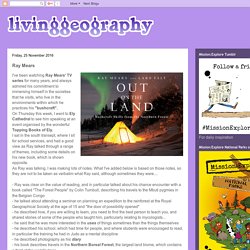 On Thursday this week, I went to Ely Cathedral to see him speaking at an event organised by the wonderful Topping Books of Ely. I sat in the south transept, where I sit for school services, and had a good view as Ray talked through a range of themes, including some details on his new book, which is shown opposite. As Ray was talking, I was making lots of notes. What I've added below is based on those notes, so they are not to be taken as verbatim what Ray said, although sometimes they were....

This shocking map shows how much wilderness we’ve destroyed in just 20 years. Wilderness (Extreme tourism) ”No one should be able to enter a wilderness by mechanical means.” —Garrett Hardin [Simple principle that could save what's left of planet] St Kilda images (2531) The dirtiest fuel - Thin Ice Blog. The Russian tanker Renda transits toward the port of Nome, Alaska, Jan. 13, 2012. © U.S. 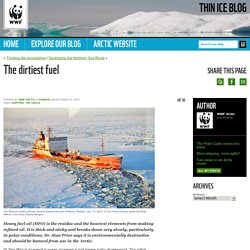 Coast Guard; photo by Petty Officer 2nd Class Charly Hengen Heavy fuel oil (HFO) is the residue and the heaviest elements from making refined oil. It is thick and sticky and breaks down very slowly, particularly in polar conditions. Dr. Sian Prior says it is environmentally destructive and should be banned from use in the Arctic. Dr Sian Prior is an expert in ocean governance and marine policy development. Uncharted waters: Mega-cruise ships sail the Arctic. Discovering Antarctica - interactive education for schools. South Pole Hotel where rooms cost £54k a WEEK and the temperature is -5C. After an extensive renovation the White Desert hotel in Antarctica is ready to start accepting guests although a week's stay will cost a cool £54,000. 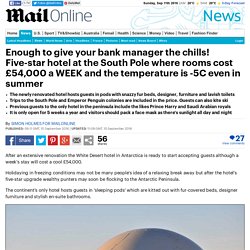 Holidaying in freezing conditions may not be many people's idea of a relaxing break away but after the hotel's five-star upgrade wealthy punters may soon be flocking to the Antarctic Peninsula. The continent's only hotel hosts guests in 'sleeping pods' which are kitted out with fur-covered beds, designer furniture and stylish en-suite bathrooms. Ice pod. Hotel guests make their way to their room in a snow cleared backdrop. Each pod weighs three tones and had to be shipped from elsewhere to the southernmost continent Majestic view. Looks warm. We assume for the price all of the pods come equipped with central heating too! The all inclusive hotel, which permits 12 guests at a time, is only open for five weeks across the summer months of November and December. 21st century igloo. Ship found in Arctic 168 years after doomed Northwest Passage attempt.

The long-lost ship of British polar explorer Sir John Franklin, HMS Terror, has been found in pristine condition at the bottom of an Arctic bay, researchers have said, in a discovery that challenges the accepted history behind one of polar exploration’s deepest mysteries. 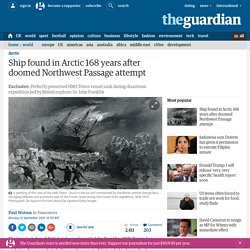 Sleeper train to Scotland; Mountain Bikes And Bothy Nights. When I’m stuck in the city, chasing deadlines and dollars and other men’s dreams, I often wish I could escape to something different. 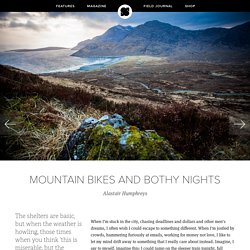 When I’m jostled by crowds, hammering furiously at emails, working for money not love, I like to let my mind drift away to something that I really care about instead. Imagine, I say to myself, imagine this: I could jump on the sleeper train tonight, fall asleep in London and wake up in the massive silence of the mountains. Imagine that.