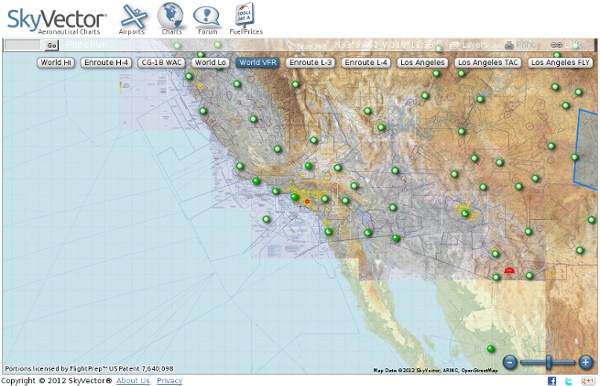 Flight Training: Pre Solo Courses and Quizzes ASI Airport Markings Flash Cards These handy flash cards, prepared by the Air Safety Institute, are a handy way to learn the meanings of airport surface markings. What may look like randomly striped lines on taxiways and runways actually convey critical safety information to pilots, communicating where they can and cannot go. Electronic Flight Bag (EFB) GlobalNavSource is excited to announce EFB (Electronic Flight Bag). This app supports paperless operations, and give pilots access to charts, plates, weather, and other data. EFB - Try it For Free EFB is available with a free 30 day trial with full access to all features and full USA data.

RouteFinder (free access area) // 2010-02-17 15:54:00 //Fixed a problem with North Atlantic Tracks. Recently many airways west of Ireland were withdrawn and the NATs became unconnected, giving RouteFinder a really hard time to find routes between Europe an Americas. The system now does a pseudo random routing in that area (with DCT segments) to jump the gap. // 2006-04-08 06:10:00 // Please note that some airports (more and more of them lately in Europe) have arrival connecting points that cannot be reached from cruising level. If you find that the system does not use the correct arrival, or if it can't find a route at all, try specifying a lower limit in the route request. For example, instead of FL330 - FL330, try FL230 - FL330. Vx vs. Vy Let’s imagine for a moment the following hypothetical situation: Two airplanes are taking off at exactly the same moment from parallel runways. Airplane A accelerates to and climbs out at Vx while Airplane B accelerates to and climbs at Vy. What will happen in each case? Of course, we already know that Vx is the speed for best angle of climb while Vy is the speed for best rate of climb. (If you sometimes have a hard time remembering which is which, think of an X as having lots of angles.) The rule of thumb for which speed to fly is easy: We use Vx immediately after takeoff to clear obstacles, followed by Vy to reach our cruising altitude quickly.

Bienvenue sur le site de PPGpS f:wz - products - flywize DS (Data Service) english - change language home > about > page-not-found The Page Cannot Be Found Calculating Density Altitude with a Pencil We all know that as density altitude increases, there is a corresponding decrease in the power delivered by our airplane’s engine and the effectiveness of our propeller. For a typical non-turbocharged light single-engine airplane, this can result in a takeoff roll that’s 25 percent longer for every 1,000 feet of elevation above sea level. The most dangerous combination of conditions are a heavy load, unfavorable wind, high temperature, high airport elevation and high humidity. With so many variables to consider, how are we supposed to know when our density altitude is too great for the conditions? The answer is, we need to calculate our density altitude, which we can then compare against the performance information in our aircraft manual.

Fly VFR like IFR Photo: illustration by Robert Goyer I was reviewing last week’s spate of accidents and ran into another handful that fall clearly in the category of VFR accidents that would not have happened had the pilot been operating under instrument flight rules. A couple of these accidents happened when the pilot flew into power lines while en route, something that, obviously, would not happen while on an IFR flight plan. As you know, there’s nothing that prevents an instrument-rated pilot from filing and flying an IFR flight plan in clear weather, and many pilots, myself included, often do just that. There are many benefits, including the controller taking responsibility for your traffic separation, for clearing you through or keeping you away from active special use airspace and for providing altitudes and routing that (if followed, it goes without saying) ensure terrain clearance.

Fly with Your Fingertips When I first started flying, I flew using what some people call “the death grip,” a morbid term for hanging onto the yoke for dear life. I held so hard that my forearm would be sore the next day and I had a permanent tiny bruise on my thumb from pressing the push-to-talk button. After gaining some experience, I realized that most airplanes I fly don’t require that much muscle strength to be maneuvered. All I need is my fingertips. A prerequisite for successful fingertip flying is a properly trimmed airplane.

Aircraft Band Receiver Make: Projects Modify an ordinary analog AM/FM radio to eavesdrop on air traffic control communications. All you need is a screwdriver -- can't be easier than that! The FM radio band (88-108 MHz) lies just below the Civil Aviation Band (108-138 MHz), which is used for air traffic control, air shows, and other ground-to-air communications. Day Forecast for Latitude 35.54°N and Longitude 97.65 The severe weather threat continues Sunday from the Midwest to the western Gulf Coast. An area of Moderate Risk has been highlighted in northeast Okla. and southeast Kan. where large hail and damaging winds are the primary threats. Farther south into northern Texas, tornadoes will also be possible. The threat shifts to the Deep South on Monday where winds, hail and tornadoes will all be possible.