Kitsault In British Columbia Is An Abandoned Ghost Town. When you think of the perfect little town to live in, what comes to mind? 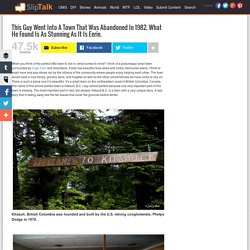 I think of a picturesque small town surrounded by huge trees and mountains. It also has beautiful blue skies and nicely manicured lawns. I think of small mom and pop stores ran by the citizens of the community where people enjoy helping each other. The town would have a nice library, grocery store, and hospital as well as the other conveniences we have come to rely on. There is such a place and it is beautiful. Kitsault, British Columbia was founded and built by the U.S. mining conglomerate, Phelps Dodge in 1979.

The town was built to sustain a mining operation for Molybdenum, which is a metal used in steel production. 10 Things Most Americans Don't Know About America. Imagine you have a brother and he’s an alcoholic. 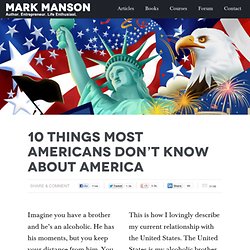 He has his moments, but you keep your distance from him. You don’t mind him for the occasional family gathering or holiday. You still love him. But you don’t want to be around him. This is how I lovingly describe my current relationship with the United States. I know that’s harsh, but I really feel my home country is not in a good place these days.

I realize it’s going to be impossible to write sentences like the ones above without coming across as a raging prick, so let me try to soften the blow to my American readers with an analogy: Verification. 2014 Esalen Workshop Tuition Including Accommodations. World Wide Opportunities on Organic Farms - WWOOF. 10 Countries With Perfect Climates" Like the previous two South American countries, this mountainous, landlocked country located in the heart of the continent has a climate that varies with its elevation. 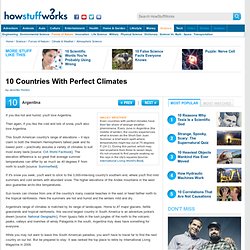 With nearly 21, 300 feet (6,500 meters) separating its highest and lowest points, that's a lot of variation [source: CIA World Factbook]. Most of Bolivia's residents live in the capital city of La Paz, next to Lake Titicaca -- the world's highest capital and the world's highest lake, respectively. Adinkra symbol - adinkra cloth - met art ashanti - traditional african art - traditional african art. Flights from Manchester to GAY, PAT. How to Apply Dhamma Bodhi. Updated on November 27, 2013 How to apply To apply for a course please read the Code of Discipline and then find a convenient date in the Course Schedule, and submit an online application form by clicking on the date. 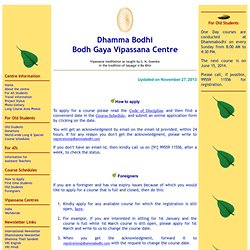 You will get an acknowledgment by email on the email-id provided, within 24 hours. If for any reason you don't get the acknowledgment, please write to registration@dhammabodhi.com If you don't have an email-id, then kindly call us on [91] 99559 11556, after a week, to check the status. Foreigners If you are a foreigner and has visa expiry issues because of which you would like to apply for a course that is full and closed, then do this: Kindly apply for any available course for which the registration is still open, here.For example, if you are interested in sitting for 1st January and the course is full while 1st March course is still open, please apply for 1st March and write to us to change the course date. We will attempt to accommodate. Languages of India. The languages of India belong to several language families, the major ones being the Indo-Aryan languages spoken by 73% of Indians and the Dravidian languages spoken by 24% of Indians.[1][2] Other languages spoken in India belong to the Austroasiatic, Tibeto-Burman, and a few minor language families and isolates.[3] The Republic of India does not have a national language.[4][5] However, the official languages of the Union Government of Republic of India are Hindi in the Devanagari script and English.[6] The constitution of India states that "The official language of the Union shall be Hindi in Devanagari script. 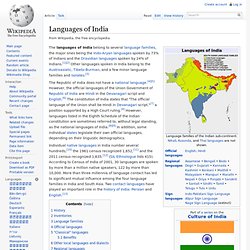 "[7] a position supported by a High Court ruling.[4] However, languages listed in the Eighth Schedule of the Indian constitution are sometimes referred to, without legal standing, as the national languages of India.[8][9] In addition, some individual states legislate their own official languages, depending on their linguistic demographics. Top Five Vipassana Meditation Centers in India. Congo. South africa. Ghana Immigration Service.

Ghana is located on the west coast of Africa, about 750 km north of the equator between the latitudes of 4 and 11.5 ° North and longitude 3.11 ° West and 1.11° East.It is bounded on the North by Burkina Faso, on the West by La Cote D'ivoire, on the East by Togo and on the South by the Gulf of Guinea (Atlantic Ocean). 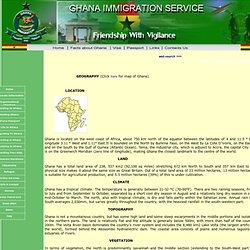 Tema, the industrial city, which is adjunct to Accra, the capital City of Ghana, is on the Greenwich Meridian (zero line of longitude), making Ghana the closest landmark to the centre of the world. Ghana has a total land area of 238, 537 km2 (92,100 sq miles) stretching 672 km North to South and 357 km East to West. Its physical size makes it about the same size as Great Britain. Out of a total land area of 23 million hectares, 13 million hectares (57%) is suitable for agricultural production, and 5.3 million hectares (39%) of this is under cultivation.

Ghana has a tropical climate. Government of Ghana Official Portal. Flights from Manchester to GAY, PAT. Tushita is a Tibetan Buddhist Meditation Centre in Dharamsala, India, open to all.