AR3 6 Axis Robot. Part Fitting Calibration by MEH4d. Parametric pulley - lots of tooth profiles by droftarts. This thing will create a range of metric and imperial tooth profile pulleys, with any number of teeth, specified in the Openscad file. 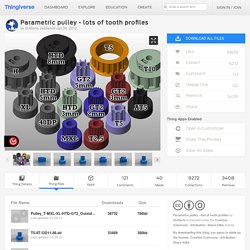 Tooth profiles currently supported are MXL, 40DP, XL, L, T2.5, T5, T10, AT5, HTD (3mm, 5mm, 8mm) and GT2 (2mm, 3mm 5mm). NOTE: error in script regarding L and H pulleys spotted by OSTycoon (see comments) - the script says H, but actually it is L profile. There are a range of editable parameters for editing the fit of the tooth (to account for printer variation), the pulley base, captive nut(s) slot for the set screw, motor shaft diameter, pulley height and belt retainers. The attached stls are reference pulleys, mostly around the size used on repraps. Fully Parametric Cable Chain by Zerginator. As I did not find a cable chain suiting my needs, I decided to make my own. 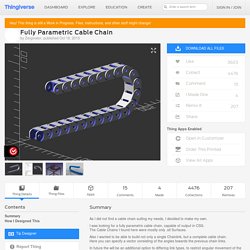 I was looking for a fully parametric cable chain, capable of output in CSG. The Cable Chains I found here were mostly only .stl Surfaces. Also I wanted to be able to build not only a single Chainlink, but a complete cable chain. Time Lapse Photography Equipment - Rail - Follow Focus - DIY. DSLR_Camera_FollowSlider_V2.0 by swanglei. This is my second version of the camera slider with follow function,you can also check the first version here: by the way,you can also download the mountgears from V1.0. 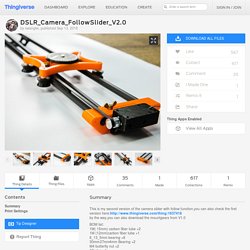 Radio Controlled Cable Dolly for Small Format Cameras. A cable dolly, even a powered one, is quite a simple thing to assemble. 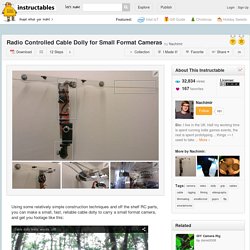 Getting all of the little things right, designing and tweaking it to work well is the complex part. You'll probably run into all kinds of problems such as undesirable swinging, not enough wire tension, and insufficient contact between the drive wheel and the line. Don't be discouraged, you can iron these out. I'm going to show you construction of my first ugly prototype, then take everything I learned to make a neat looking CNCed and improved version.

In some steps, I'll be doing more than I really had to. This instructable is focussed mostly on making the dolly with hand tools, since they're what more people have access to, but I did use some bigger machines to better the results and speed up the process. Tools: Sharpie (for marking metal). Materials and Components: FLIR Motion Control Systems Products. • Structure réglable • Engrenage de pas 48 • Entièrement assemblé • Arbres creux en aluminium • Idéal pour les caméras Canon séries 5D et 7D. 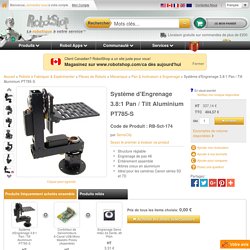 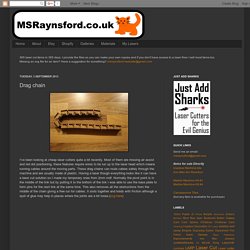 Most of them are missing air assist and red dot positioning, these features require wires to be run up to the laser head which means running cables around the moving parts. These drag chains can route cables safely through the machine and are usually made of plastic. Having a laser though everything looks like it can have a laser cut solution so I made my temporary ones from 2mm mdf. Normally the pivot point is in the middle of the link but by putting it to the bottom of the link I was able to use the base plate to form pins for the next link at the same time.

FabLab RUC: Robot arm v. 0.3. We have made a super cheap (less than 1000 dollars) industrial robot arm to enable students to hack larger scale robotics and to enable small local productions to use robots in their processes without breaking the bank. 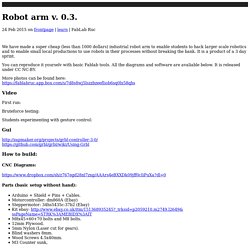 It is a product of a 3 day sprint. You can reproduce it yourselv with basic Fablab tools. All the diagrams and software are avaliable below. It is released under CC NC-BY. Technique de photographie et cinéma. StevenBrace.co.uk » Archive DIY Arduino Motorised Time-Lapse Head - StevenBrace.co.uk. In May I came across the OpenMoCo project which is a community that is producing an open-source photographic motion control system, concentrating mainly on the software side of the problem. 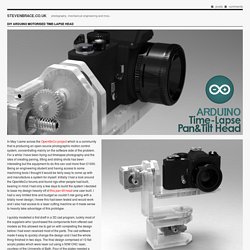 For a while I have been trying out timelapse photography and the idea of creating paning, tilting and sliding shots has been interesting but the equipment to do this can cost more than £1000. Being an engineering student and having access to some machining tools I thought it would be fairly easy to come up with and manufacture a system for myself. Initially I had a look around the OpenMoCo forums and found rigs other people had built, bearing in mind I had only a few days to build the system I decided to base my design heavily off of this pan-tilt head one user built. A render of the cad model for one of the earlier designs is shown above, subsequently the profile of the base sections was changed to create a fully enclosed base. 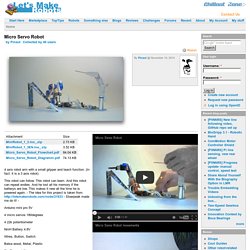 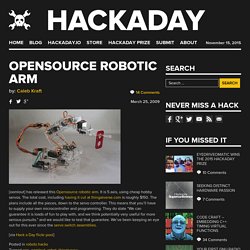 It is 5 axis, using cheap hobby servos. The total cost, including having it cut at thingaiverse.com is roughly $150. The plans include all the pieces, down to the servo controller. This means that you’ll have to supply your own microcontroller and programming. Pocket Sized Robot Arm #meArm V0.4. The #meArm was designed with economy in mind. It is understood that laser cutters aren't the most common tools but there are more of them out there now than ever! First you'll need a set of parts. Grab the dxf and use a cnc mill or laser cutter. For the v0.3 we also had people 3D print the parts.