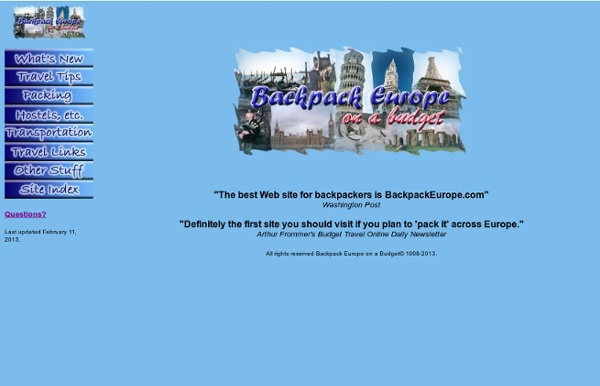 "The best Web site for backpackers is BackpackEurope.com" Washington Post "Definitely the first site you should visit if you plan to 'pack it' across Europe."Arthur Frommer's Budget Travel Online Daily Newsletter Welcome to Backpack Europe on a Budget! You should find everything you need here to start planning your backpacking or budget trip to Europe. Traveling is my passion and I'm here to share my first-hand travel advice with you.

Planning a Trip to Europe: Your 10-Step Guide Before you can experience authentic Spanish tapas, piazzas in Rome or rooftop terraces in Prague, an important to-do list stands between you and your European vacation. The logistics involved in planning a Europe trip may seem tedious or overwhelming, but the more prepared you are, the greater your chances of a successful trip that lives up to your expectations. That's why it's important to do a bang-up job creating an itinerary, arranging transportation and tackling the brass tacks before you're off to the Continent. The following simple steps will help you engineer a well-planned escape to Europe -- so you can spend less time worrying about your travel arrangements and more time staring at pictures of castles and men in kilts.

What Does a $4 Bungalow Look Like? Just what does $4 buy you in Laos? I stayed in a truly basic bungalow in Nong Khiaw and, though it lacked most amenities, I enjoyed it so much that I stayed an extra day. Another traveler had recommended the Bamboo Paradise Guesthouse, saying it was cheap and clean, but nothing fancy. For 30,000 kip ($3.75 US), I got a bamboo bungalow on stilts with a fan, my own bathroom, hot shower, a large bed, mosquito net, and a balcony with views of the Nam Ou below. There were cheaper options: I checked out a room up the street that went for 20,000 kip per night, but it was just a small, windowless wooden box with a bed and a door.

Thatched houses in England Thatching is the craft of building a roof with dry vegetation such as straw, water reed, sedge, rushes and heather, layering the vegetation so as to shed water away from the inner roof. It is a very old roofing method and has been used in both tropical and temperate climates. Thatch is still employed by builders in developing countries, usually with low-cost, local vegetation. By contrast in some developed countries it is now the choice of affluent people who desire a rustic look for their home or who have purchased an originally thatched abode. In 21st century England, all this still exists, but they are expensive to maintain and since modern materials are cheaper and easier, thatches have been slowly disappearing over the last century.

Creative new ways to board an airplane – Lonely Planet blog Airlines never stand still. Following recent months when airlines introduced fees for printing boarding passes and higher prices for sitting in window or aisle seats, airlines are getting creative with the way they board passengers. Thankfully, some recent experiments aren’t direct attempts to extract more money from passengers: while some airlines are simply trying to be more fair and efficient, KLM is toying with the idea of allowing passengers to use social media to select seatmates, and Air Baltic is experimenting with seating passengers based on mood. Why stop there? There are many other innovative ways airlines could consider boarding passengers: 30 Places to Find Cheap Airline Tickets 30 Places to Find Cheap Airline Tickets Thursday, December 20, 2007 at 7:06pm by admin Scoring a great deal on plane tickets is only one of the challenges air travelers face these days.

The 20 Best Travel Websites on the Internet - Golden Book Traveler Update: Visit the 2012 version of The 20 Best Travel Websites on the Internet I hope that everyone who attended my SXSW Core Conversation panel on How to Make Money Traveling Around the World enjoyed the presentation. As promised, I have a listing of my top 20 favorite travel websites (in no particular order). I’m still working on my eBook “70 Vacations in 7 Months“. Backpacking Foods Backpacking Foods for Breakfast What backpacking foods get me going in the morning? I start the day with a hearty breakfast like homemade oatmeal with dried fruit, loaded grits, sweet potato porridge or scrambled eggs. Instant oatmeal and grits are convenient – just tear open the package and mix with hot water – but the former has more sugar than sulfite preserved fruit pieces in it and the latter contains partially hydrogenated oil and artificial flavors. See the ingredients list at the bottom of the page. Breakfast Recipes:

The Packing List for Backpacking in Europe - General Itineraries - The... May 25, 2000 (Updated Jun 18, 2000) Backpacking in Europe this summer? Just planning? Top US travel scams – Lonely Planet blog Considering the vast numbers of travellers each year, it’s encouraging that so little bad happens to people on the road. But there are things to be wary of. In the USA too, where American families travel nearly five times a year, mostly in-country, and an additional 156 million foreign visitors come to visit.

10 Round the World Travel Myths Debunked Excuses, excuses, excuses. When it comes to travel, particularly long term travel, everyone has an excuse for why they can’t do it. Myths abound about long term, RTW travel, and if you’re on the fence about taking the plunge for yourself, it’s time to realize that absurdity of some of these myths. Why is it that the people who have never traveled long term have such a skewed view of this type of travel? Why are there so many myths out there that are just flat out untrue? While it’s difficult to answer these questions, it’s not very hard to dispel the many myths about RTW travel that are out there.

Art of Backpacking: Backpacking Independent International Traveler Though Central America is regarded as a cheap area to travel around some countries are more expensive than others and volunteering can be a good way to save funds and stick around for longer. Other benefits of becoming a volunteer English teacher, helping out at orphanages or conservation work include improving your Spanish and seeing sides to Central America that perhaps would otherwise be missed. Along with its beaches and biodiversity, Central America is particularly rich in grassroots volunteer organisations looking for volunteers to lend a helping hand. Skilled hands are particularly welcome but often the only requirement is enthusiasm and a willingness to get those helping hands dirty. Belize Belize Audubon Society BAS cares for nine protected areas in Belize including a jaguar preserve, Mayan human sacrificial remains, coral reefs and the famous dive spot, the Blue Hole.