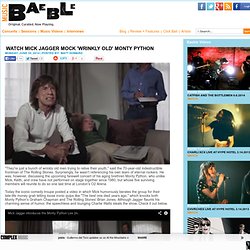 Surprisingly, he wasn't referencing his own team of eternal rockers. He was, however, discussing the upcoming farewell concert of his aging brethren Monty Python, who unlike Mick, Keith, and crew have not performed on stage together since 1980, but whose five surviving members will reunite to do so one last time at London's O2 Arena. Today the iconic comedy troupe posted a video in which Mick humorously berates the group for their late-life money grab letting loose ironic quips like "The best one died years ago," which knocks both Monty Python's Graham Chapman and The Rolling Stones' Brian Jones.

Although Jagger flaunts his charming sense of humor, the speechless and lounging Charlie Watts steals the show. Check it out below. Dead Parrot sketch? Untitled Document. LOTS OF PUNS. ...A guy goes into a nice restaurant bar wearing a shirt open at the collar and is met by a bouncer who tells him he must wear a necktie to gain admission. 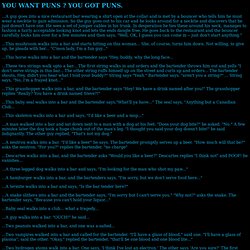 So the guy goes out to his car and he looks around for a necktie and discovers that he just doesn't have one. He sees a set of jumper cables in his trunk. In desperation he ties these around his neck, manages to fashion a fairly acceptable looking knot and lets the ends dangle free. He goes back to the restaurant and the bouncer carefully looks him over for a few minutes and then says, "Well, OK, I guess you can come in -- just don't start anything.

" - StumbleUpon. 21 Best GIFs of All Time of the Week. Why guys are so cool... 32 Painfully True Facts About Everyday Life. Their graphs and diagrams are snarky and sarcastic but, for the most part, true. 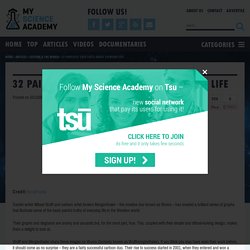 This, coupled with their simple and official-looking design, makes them a delight to look at. Wulff and Morgenthaler share these images on Wumo (formerly known as Wulffmorgenthaler). If you think you may have seen their work before, it should come as no surprise – they are a fairly successful cartoon duo. Their rise to success started in 2001, when they entered and won a cartoon competition. 8 Animal-Based Sex Positions Other Than Doggy Style. Dude, you're gay by John Roy Stand-up Comedy and Video on RooftopComedy.com. 1. 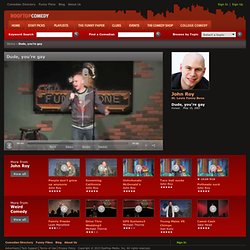 In the player page, click on "Embed" at the bottom right under the video. 2. THE AMAZING ART OF DAN LUVISI. Dan Luvisi has a new take on classic characters acting out pop culture references. 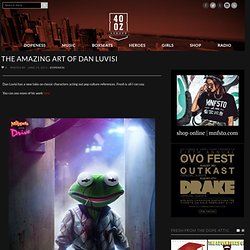 Fresh is all I can say. You can see more of his work here. Men Photographed in Stereotypical Pin-Up Poses. “Men-ups!” 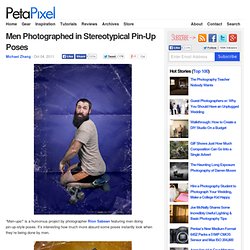 Is a humorous project by photographer Rion Sabean featuring men doing pin-up-style poses. It’s interesting how much more absurd some poses instantly look when they’re being done by men. There are a couple more photos that can be seen in this Flickr set. Men-ups! 38 Reasons To Check Your Photographs Before Sharing. A compelling list of reasons for why you might want to ease off the share-trigger before you put any photos online. 1. 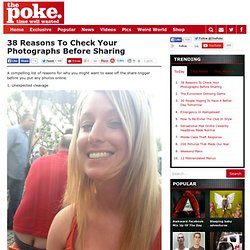 Unexpected cleavage 2. Background bladder problems. 3. 17 GIFs History Will Never Forget - Dontpokethebear.com. These GIFs will live on throughout the ages. 1. 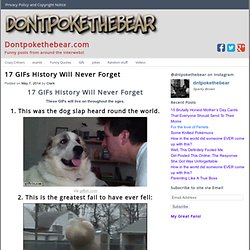 This was the dog slap heard round the world. 2. This is the greatest fail to have ever fell: 3. 4. 20 Random funnies to kick-start your week. Santa Classics. Silly Rabbit Remember Florentijn Hofman‘s Fat Monkey sculpture made of 10,000 flip flops? 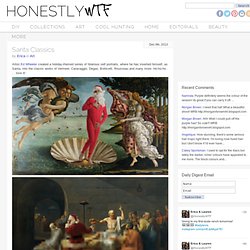 Philcrasturbation - 2012/07/17. Everything the internet was never intended to be used for... 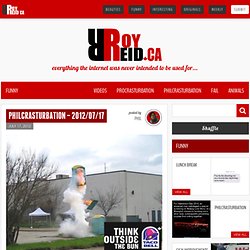 - StumbleUpon. These Awesome Fantasy Creatures Look Like Real Animals. Santani Creates Life Like Animals 1. Thorn - des dessins. - StumbleUpon. What Chefs Do When They are Bored. Chefs must have nothing to do these days! Rives: The 4 a.m. mystery. Funny-scenes.com. Another Round Of Hilarious Screencaps From Movies and TV. Photo Dump Vol. 58. 25 Ways To Feel Better When You Feel Sad. Take a bath. While bathing, listen to shitty 80s glam, but make sure you keep the radio your iPhone more than an arm’s reach away from the tub.

Eat some fruits and vegetables. Nothing like some fructose and greens to help yank the wrench out of your otherwise shitty day. Write an awful one-act play. Then read it aloud. 21 Most Unusual Stocking Stuffers You Never Knew Existed. Sometimes it can be a bit boring going over the same old gift ideas for stocking stuffers. We’ve uncovered some of the most unusual gifts you probably had no idea they made, which will definitely be out of left field for those that receive them. Make stockings a fun time with these zany gifts. Delicious food portrayed as stylish art (40 Photos) Dave Chappelle Stand Up - Scared Of The Police. 22 Outstanding Neighbour Complaint Notes. Disgruntled neighbours are righting wrongs with passive-aggressive notes complaining about loud sex, defecating dogs, wifi and loud music.

Here are 22 of the best. 1. Louis C.K.'s Great Riff About His Daughter's Questions, in Comic Form. Photo by Mike Coppola/Getty Images for the Michael J. Fox Foundation for Parkinson's Research Yesterday, illustrator Jaeil Cho posted the cartoon below on his Tumblr. In it, he illustrates the last two minutes of Louis C.K.’s 2005 HBO special One Night Stand. You can watch the original bit on YouTube, and you can buy C.K.’s latest special on his website. Stand-Up Comic Ditches Set, Devotes His Time to Destroying Heckler. Jim Gaffigan (Just For Laughs - 2001) The 25 Funniest Analogies. Interpretative Dance: Queen's 'Don't Stop Me Now' Humorous Quotes from Still Life with Woodpecker @ WorkingHumor.com. 50 Hilarious, Brilliant Mitch Hedberg One-Liners That Would've Made Epic Tweets. I first discovered Mitch Hedberg around 2007 and within minutes I was a loyal fan.

I ended up watching and listening to every last piece of his material that I could find, and excitedly went in search of his tour dates. Upon discovering that he passed in 2005, I was distraught, and since then I struggle to even watch his routines because the man was so unique and witty, I can only imagine what he’d have to say about pop culture, politics, technology and life in 2013. One thing we can be fairly certain of is that he’d be a master of Tweeting. Often his jokes were short, sweet nuggets of gold that left listeners thinking, laughing or doing a combination of both. The Worst Analogies Ever Written in a High School Essay. Paul Rudnick: "Scout's Honor" Jeremy Miller, 25, of Cincinnati, joined the Boy Scouts at 14 and went on to earn an Eagle badge. . . . His oldest son, Evan, is 7 and a Tiger Cub Scout, and Mr. 'My dear you are ugly, but tomorrow I shall be sober and you will still be ugly': Winston Churchill tops poll of history's funniest insults.

Winston Churchill's ability to lift the spirits of the British people in times of adversity were, however, neatly balanced with a sparkling line in withering put-downs. Now Churchill has topped a poll of history's funniest insults with a famous jibe directed at either the socialist MP Bessie Braddock or the Conservative Lady Astor, the first female MP (depending on which version of the story you hear). When accused by one of them of being 'disgustingly drunk' the Conservative Prime Minister responded: 'My dear, you are ugly, and what’s more, you are disgustingly ugly. Vandalized Vandalism. How to Celebrate Towel Day. Edited by Zack, Ben Rubenstein, Atomic Number 62, Webster and 16 others Douglas Adams, creator of the Hitchhiker's Guide to the Galaxy series, stated in his tome, "Never go anywhere without your towel. " - StumbleUpon. Smoke on the Yangtze. All-purpose tanuki testicles (prints by Kuniyoshi) 23 Jun 2009. Funny Jokes Pics. Stir it Up! » Blog Archive » 20 Photographs Taken at the Exact Right Angle.