Take a Relationship Quiz Together. Empathy test - are you able to perceive other people's emotions. Emotional Intelligence Quiz. Facial expressions are a universal language of emotion, instantly conveying happiness, sadness, anger, fear, and much more. 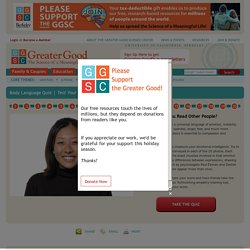 Reading these expressions is essential to compassion and empathy. Take this short quiz to measure your emotional intelligence. Try to identify the emotion conveyed in each of the 20 photos. Each answer will pinpoint the exact muscles involved in that emotion and explain the subtle differences between expressions, drawing on pioneering research by psychologists Paul Ekman and Dacher Keltner. Some emotions appear more than once. When you’re done, share your score and have friends take the quiz—and watch for our forthcoming empathy training tool, designed to improve your score. Take The Empathy Test. Lack of Empathy in Relationships.

Having grown up in a pretty much perfect family, the feeling of lack of empathy was not introduced to me till I saw one of my friend's family. 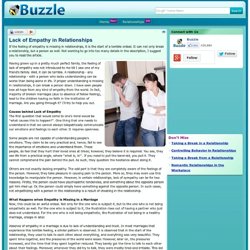 Well, it can be terrible. A relationship - any relationship - with a person who lacks understanding can be worse than being alone in life. If proper understanding is missing in relationships, it can break a person down. I have seen people lose all hope from any kind of empathy from the world. In fact, majority of broken marriages (due to absence of fellow feeling), lead to the children having no faith in the institution of marriage. It’s Hard to Live with Someone Who Lacks Empathy. Empathy is defined as the “intellectual identification with or vicarious experiencing of the feelings, thoughts, or attitudes of another” (dic.com). 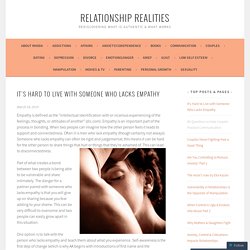 Empathy is an important part of the process in bonding. When two people can imagine how the other person feels it leads to support and connectedness. Often it is men who lack empathy (though certainly not always). Someone who lacks empathy can often be rigid and judgemental; this means it can be hard for the other person to share things that hurt or things that they’re ashamed of. This can lead to disconnectedness. Part of what creates a bond between two people is being able to be vulnerable and share intimately. Lack of Empathy: The Most Telling Narcissistic Trait. This is part 4 of my second series about the similarities and differences between those with borderline and narcissistic personality disorders. 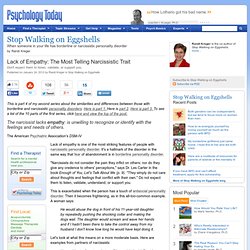 Here is part 1. Here is part 2. Here is part 3. To see a list of the 10 parts of the first series, click here and view the top of the post. The American Psychiatric Association's DSM-IV. 7 Surefire Clues to Tell if Your Spouse is A Narcissist...before it's too late. Sandy Weiner: 6 Ways to Recognize And Stop Dating A Narcissist. Sydney Couples Counselling: 7 Signs You’re Sharing Your Bed with a Narcissist. If you feel that something is not quite right in your relationship, where you’re constantly walking on egg shells, fearful of being chastised for not meeting your partner’s expectations and on the receiving end of ongoing criticism and abuse, it’s possible you may be in relationship with a narcissist. 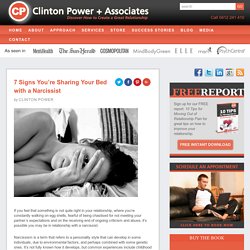 Narcissism is a term that refers to a personality style that can develop in some individuals, due to environmental factors, and perhaps combined with some genetic ones. It’s not fully known how it develops, but common experiences include childhood abuse, neglect or trauma or a childhood of excessive pampering where the child is constantly praised as special and unique. Take the Narcissistic Personality Inventory. By Sharon Jayson, USA TODAY Authors Drew Pinsky and S. 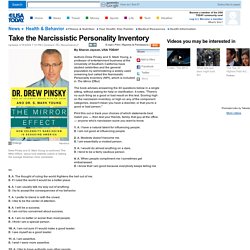 Mark Young, a professor of entertainment business at the University of Southern California have studied celebrities and the general population by administering a widely used screening tool called the Narcissistic Personality Inventory (NPI), which is included in The Mirror Effect. The Narcissistic Personality Inventory - Dr. Drew Pinsky. Let's say your overall score is an 18, but your high score is largely the product of your higher results in the superiority category. 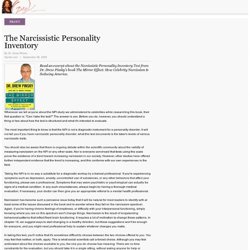 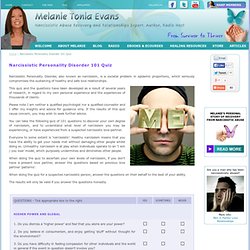 This quiz and the questions have been developed as a result of several years of research, in regard to my own personal experience and the experiences of thousands of clients. Please note I am neither a qualified psychologist nor a qualified counsellor and I offer my insights and advice for guidance only. Wellness Matters: Codependents appear to be controlling, but are the ones being controlled. Life at Balance: Mental Health Counseling in Sacramento, CA: The Way Codependency Works. The Way Codependency Works Mar 9, 05:01 PM by Stewart Bloom. 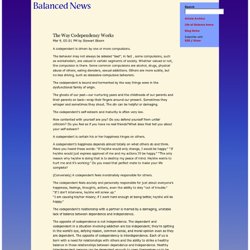 Interdependence vs Codependence. One of my fascinations with codependence is its versatility. 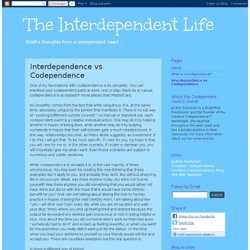 You can manifest your codependent parts at work, rest or play; black tie or casual, codependence is accepted in more places than MasterCard. Its versatility comes from the fact that while ubiquitous, it is, at the same time, absolutely unique to the person that manifests it. There is no set way of “seeking fulfillment outside yourself,” no manual or standard set: each codependent event is a creative individual action.

One may do it by helping another in hopes of being liked, while another may do it by bullying somebody in hopes that their self-esteem gets a much needed boost. In this way, relationships become, as Pietro Abela suggests, an investment: If I do this, I will get that. New Patterns of Codependency. Co-dependency: Mental Health America. Co-dependency is a learned behavior that can be passed down from one generation to another. It is an emotional and behavioral condition that affects an individual’s ability to have a healthy, mutually satisfying relationship. It is also known as “relationship addiction” because people with codependency often form or maintain relationships that are one-sided, emotionally destructive and/or abusive.

The disorder was first identified about ten years ago as the result of years of studying interpersonal relationships in families of alcoholics. Co-dependent behavior is learned by watching and imitating other family members who display this type of behavior. Codependent Relationships. The Codependent Relationship Questionnaire (C.R.Q.) can be used to assess whether or not you are in a codependent sexual relationship. If you are currently in a sexual relationship, you can use the C.R.Q. to determine if in the past you have been in one. If you are currently in a relationship, fill out this questionnaire by yourself. Please check the answers below that most closely describes your feelings or behavior. Answer all questions yes or no. Do you place your partner's needs ahead of yours? ____ Total number of Yes answers. Rejecting emotional intimacy in relationships is a lose/lose. You’re a man who prefers to be in relationships with women where emotional intimacy isn’t expected or wanted.

You’re okay with sexual intimacy, but only if it isn’t accompanied by emotional intimacy. In other words, you want sex, but you don’t want any heart connection with a woman. Why She Hates It, Why You Do It, and 6 Simple Ways to Make It a Non-Issue. Video Game Addiction Symptoms & Signs - The BIG List - TechAddiction. Video Game Addiction Symptoms and Signs By Dr. Brent Conrad Clinical Psychologist for TechAddiction TechAddiction is often asked by clients, parents, teachers, and reporters about video game addiction symptoms and signs. First, a disclaimer: Video game addiction, just like Internet Addiction, is not an official DSM-IV diagnosis, and in 2007 the American Medical Association rejected a proposal to classify video game addiction as a mental disorder. Boyfriend or Husband Addicted to Video Games? Help & Advice - TechAddiction. Are you losing Your Husband to Video Games? Although both men and women can develop internet or gaming addictions, it seems that many more women are talking about their husbands playing video games constantly.

Constant video gaming can lead to marital problems and sadly, in many cases, divorce. Gaming Addiction People can become addicted to video games in similar fashion that people become addicted to other things, such as drugs or alcohol. The obvious difference is that video game addictions don’t have the physical dependence component that drugs do.