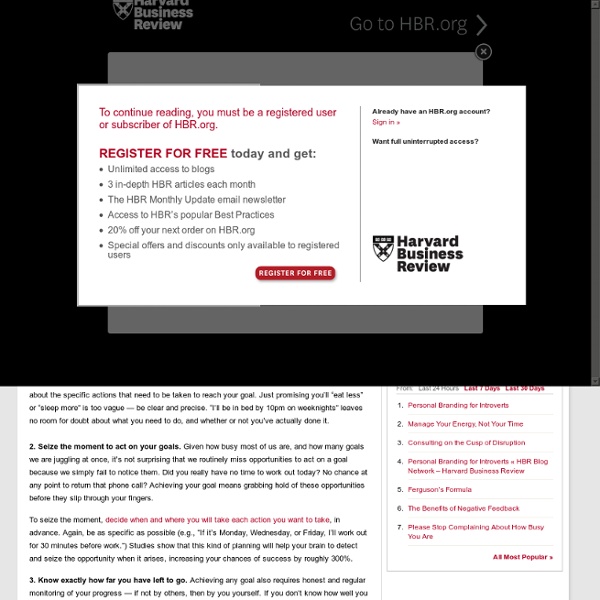 Learn more about the science of success with Heidi Grant Halvorson’s HBR Single, based on this blog post. Why have you been so successful in reaching some of your goals, but not others? If you aren’t sure, you are far from alone in your confusion. It turns out that even brilliant, highly accomplished people are pretty lousy when it comes to understanding why they succeed or fail. The intuitive answer — that you are born predisposed to certain talents and lacking in others — is really just one small piece of the puzzle. In fact, decades of research on achievement suggests that successful people reach their goals not simply because of who they are, but more often because of what they do. 1. To seize the moment, decide when and where you will take each action you want to take, in advance. 3. Fortunately, decades of research suggest that the belief in fixed ability is completely wrong — abilities of all kinds are profoundly malleable. 7. 8. 9.

Georges Lemaître Monseigneur Georges Henri Joseph Édouard Lemaître, (French: [ʒɔʁʒə ləmɛtʁ] ( ); 17 July 1894 – 20 June 1966) was a Belgian Roman Catholic priest, astronomer and professor of physics at the Université catholique de Louvain.[1] He was the first known academic to propose the theory of the expansion of the Universe, widely misattributed to Edwin Hubble.[2][3] He was also the first to derive what is now known as Hubble's law and made the first estimation of what is now called the Hubble constant, which he published in 1927, two years before Hubble's article.[4][5][6][7] Lemaître also proposed what became known as the Big Bang theory of the origin of the Universe, which he called his 'hypothesis of the primeval atom or the "Cosmic Egg".[8] Biography[edit] According to the Big Bang theory, the universe emerged from an extremely dense and hot state (singularity). Space itself has been expanding ever since, carrying galaxies with it, like raisins in a rising loaf of bread.

What It Takes to Form a Good Habit I think "accountability buddy" really misses the point. There is satisfaction and joy in accomplishing the task, but that's where accountability buddy is a misnomer. All habits of any sort will trip, falter, fail, etc. It's all about getting back in the game. People who falter in quitting smoking, depression, learning a new skill, taking up exercise or learning a new habit need a buddy who they enjoy doing it with and will help them get back in the game. We are humans and we love to connect and share experiences with - even introverts have a means by which they connect and share. 30 Life-Enhancing Things You Can Do in 30 Minutes or Less Many of us attempt to measure our happiness based on the duration of certain favorable experiences in our lives. The longer a favorable experience lasts, the happier we think we’ll be. But the truth is, life is simply a string of small, independent moments that are always changing. Thus, a few minutes well spent here and there can make a big difference in what we get out of life in the long-term. Here are 30 things you can do in 30 minutes or less that will have a positive emotional effect on you and those closest to you.

Thinking like a genius: overview Thinking and recall series Problem solving: creative solutions "Even if you're not a genius, you can use the same strategies as Aristotle and Einstein to harness the power of your creative mind and better manage your future." 18 Tricks to Make New Habits Stick Wouldn’t it be nice to have everything run on autopilot? Chores, exercise, eating healthy and getting your work done just happening automatically. Unless they manage to invent robot servants, all your work isn’t going to disappear overnight. Do 3 Essential Tasks Everyday. No More. No Less. Designed by Dmitry Baranovskiy for the Noun Project The creative routines of famous creatives has been popular internet fodder this year. The Pacific Standard thinks this obsession and trend of emulating famous artist’s habits is problematic, to say the least. The larger picture, says Casey N. Cep, is that most artists did not always followed these routines they’re known for anyways. In the end they would have still produced genius work regardless of the kind of breakfast they ate, hours they worked, or whatever office supplies they used.

The really free schools are online - Features, Gadgets & Tech But can a quality education be delivered online? And, more to the point, how much would it cost? In just over a month's time (10 October), Stanford University is launching three free online courses – Introduction to Artificial Intelligence, Introduction to Databases and Machine Learning – that are open to all, taught by eminent scientists, involve study, homework and exams, and are rewarded with a "statement of accomplishment", should you complete them. It's been described as a "bold experiment in distributed education", and so far more than 135,000 people have signed up to take the Artificial Intelligence class alone. Professor Sebastian Thrun, one of its teachers, has expressed delight at the prospect of addressing more students in a few short weeks that in his entire career, but what is Stanford's "statement of accomplishment" worth? And does it signal a new direction in the provision of education?

7 Not So Obvious Habits To Maximize Your Productivity I was a big fan of productivity, and, in some respects, I still am. I’ve been a very early adopter of GTD, and, for years, I did my weekly reviews with the discipline of a zen monk. But, eventually, I hit a roadblock. GTD is about getting things “done”, but in life we have much more to experience than “doing”. We feel. We dream. How To Create A Habit In 15 Days Most of our life is lived by habits. We learn how to ride a bike, how to drive a car, we even learn how to speak and read. And then we do all of these with minimum effort and implication. Basically, all of these are habits. They allow us to focus on other things while pushing the routine into background. It would be quite difficult to learn to drive the car every time you need to go shopping, isn’t it?

The Age of Revolution: 10 Lessons for Leaders of the Change Generation “If your actions inspire others to dream more, learn more, do more and become more, you are a leader.”John Quincy AdamsTweet 1) Follow Your Internal Compass and Empower Others to Do The Same Deep down everyone knows the direction they should go in, however, fear and uncertainty can often paralyze the strongest ambition. You must learn to listen and trust your internal compass if you are to ever discover your own potential. Possibilianism Not to be confused with Possibilism. Possibilianism is a philosophy which rejects both the diverse claims of traditional theism and the positions of certainty in strong atheism in favor of a middle, exploratory ground.[1][2][3][4][5] The term was first defined by neuroscientist David Eagleman in relation to his book of fiction Sum: Forty Tales from the Afterlives.[6] Asked whether he was an atheist or a religious person on a National Public Radio interview in February 2009, he replied "I call myself a Possibilian: I'm open to...ideas that we don't have any way of testing right now."[6] In a subsequent interview with the New York Times, Eagleman expanded on the definition: "Our ignorance of the cosmos is too vast to commit to atheism, and yet we know too much to commit to a particular religion. A third position, agnosticism, is often an uninteresting stance in which a person simply questions whether his traditional religious story (say, a man with a beard on a cloud) is true or not true.