100 Simple Ways to Change Your Life for the Better 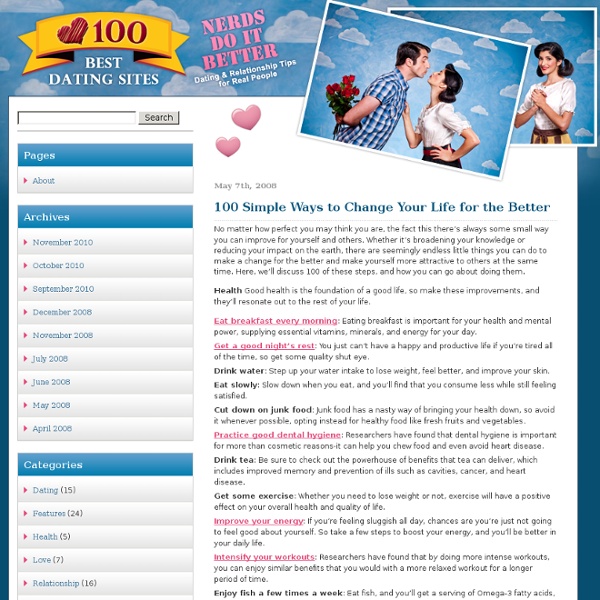 May 7th, 2008 100 Simple Ways to Change Your Life for the Better No matter how perfect you may think you are, the fact this there’s always some small way you can improve for yourself and others. Whether it’s broadening your knowledge or reducing your impact on the earth, there are seemingly endless little things you can do to make a change for the better and make yourself more attractive to others at the same time. Here, we’ll discuss 100 of these steps, and how you can go about doing them. Health Good health is the foundation of a good life, so make these improvements, and they’ll resonate out to the rest of your life. Social Take these steps to change your social life for the better. Join a book club: Get some social interaction while improving your knowledge with a book club.Get out of the house: Believe it or not, the world just isn’t going to come to you. Emotional Improve your emotional life with these simple strategies to improve your health and relationships.

Related:  New 2 Do • TopTips • self improvement • Improve My Life

101 Revolutionary Ways to Be Healthy Do the healthy thing, even when it's challenging, inconvenient or considered weird. Take pride in that. Just because it's popular doesn't mean it's smart or good for you. Maybe ? Maybe. . .we were supposed to meet the wrong people before meeting the right one so that, when we finally meet the right person, we will know how to be grateful for that gift. Maybe . . . when the door of happiness closes, another opens; but, often times, we look so long at the closed door that we don’t even see the new one which has been opened for us. Maybe . . . it is true that we don’t know what we have until we lose it, but it is also true that we don’t know what we have been missing until it arrives. Maybe . . . the happiest of people don’t necessarily have the best of everything; they just make the most of everything that comes along their way. Maybe . . . the brightest future will always be based on a forgotten past; after all, you can’t go on successfully in life until you let go of your past mistakes, failures and heartaches. Maybe . . you should always try to put yourself in others’ shoes.

7 Lessons From 7 Great Minds Have you ever wished you could go back in time and have a conversation with one of the greatest minds in history? Well, you can’t sorry, they’re dead. Unless of course you’re clairaudient, be my guest. But for the rest of us, we can still refer to the words they left behind. Even though these great teachers have passed on, their words still live, and in them their wisdom. I’ve made a list of seven what I believe are some of the greatest teachings by the world’s greatest minds. 10 Articles That Changed My Life It’s easy to find a well written article. It’s not always easy to find a well written article with genuine value. That’s because the Internet has nearly limitless value — you can use it to look up the correct spelling of a word, or to translate text between languages, or even figure out “what’s the name of that guy from that movie who was in that other movie?”

50 Ways to Get Your Life in Order This is an article by guest writer Mark Foo, author of The 77 Traits of Highly Successful People. There’s nothing wrong with a little bit of chaos in your life. As Albert Einstein once stated, “Three rules of work: out of clutter find simplicity, from discord find harmony, in the middle of difficulty lies opportunity.” 6 Logical Fallacies That Cost You Money Every Day Throws Good Money After Bad The competitive instinct is not just a phrase football commentators invented to give words to the tingly feeling they get watching Brett Favre play football. Our brain's natural tendency towards competition is arguably the reason your family survived the hunter gatherer knife fight of 2000 BC. And as countless uninspired armies and poorly coached teams have demonstrated throughout the years, your ability to compete tends to be directly proportional to your ability to convince yourself that you're doing the right thing. This leaves us with a brain that loves to compete, and is awesome at convincing itself that it's right. In the financial realms, when these two instincts collide, your brain will play a retarded game of chicken with reality that economists have termed "irrational escalation of commitment".

50 Things Everyone Should Know How To Do Self-reliance is a vital key to living a healthy, productive life. To be self-reliant one must master a basic set of skills, more or less making them a jack of all trades. Contrary to what you may have learned in school, a jack of all trades is far more equipped to deal with life than a specialized master of only one. How to Come Up with Good Conversation Topics Expert Reviewed Four Parts:Learning About Basic Conversation StartersExtending the ConversationPushing BoundariesConversation HelpCommunity Q&A Even if you're good with people, there are likely times when you're stuck for something more to say and start wondering what topic to bring up next. To come up with good conversation topics, you should prepare a mental list of ideas beforehand so that you can seamlessly pull up one idea and continue on with your chat. Form conversation around the other person, tailoring the topic based on how well you know him or her, and give the other person equal opportunity to steer the conversation in other directions. Steps

The Little But Really Useful Guide to Creativity “The secret to creativity is knowing how to hide your sources.” - Albert Einstein Post written by Leo Babauta. Follow me on Twitter. It’s easier than ever to be creative, to create, to imagine and make what’s imagined become reality. It’s also tougher than ever, with distractions surrounding us in ways never before imagined. No matter what kind of creative type you are — writer, painter, musician, marketer, blogger, photographer, designer, parent, business owner — you are likely always looking for inspirations, for ways to let loose your creative genius.

There's no speed limit. (The lessons that changed my life.) Whether you're a student, teacher, or parent, I think you'll appreciate this story of how one teacher can completely and permanently change someone's life in only a few lessons. I met Kimo Williams when I was 17 - the summer after I graduated high school in Chicago, a few months before I was starting Berklee College of Music. I called an ad in the paper by a recording studio, with a random question about music typesetting. When the studio owner heard I was going to Berklee, he said, “I graduated from Berklee, and taught there for a few years, too. I'll bet I can teach you two years' of theory and arranging in only a few lessons.

Related:
Related:  New 2 Do   -  TopTips   -  self improvement   -  Improve My Life   -  Improve myself   -  improve human behavior   -  Improve your writing   -  improve your writing skills   -  LEARN AND IMPROVE   -  IMPROVE   -  Self learn and improve Chck   -  How I Was Able to Ace Exams Without Studying : zen habits   -  50 Ways To Start Fresh - Dragos Roua   -  101 Short Stories that Will Leave You Smiling, Crying and Thinking   -  English Grammar – Your guide to error-free writing   -  How to Automatically Download TV Shows as Soon as They've Aired (or Turn Your PC into a TiVo)   -  Turn an Old Computer into a Networked Backup, Streaming, or Torrenting Machine with NAS4Free   -  Forwarded Messages: LIFEBOOK   -  Turn an Old Computer into a Networked Backup, Streaming, or Torrenting Machine with Linux   -  SeeMe | Showing Creators To A Global Audience   -  10 Psychology Tricks You Can Use To Influence People   -  Learn English - Passive Voice   -  Entraînement cérébral, exercices pour le cerveau, jeux pour la mémoire et condition mentale avec CogniFit   -  Nine Things Successful People Do Differently - Heidi Grant Halvorson - Harvard Business Review   -  Free IELTS Listening practice test to help pass the exam   -  How to learn any language in six months: Chris Lonsdale at TEDxLingnanUniversity - YouTube   -  How to Completely Mask & Anonymize Your BitTorrent Traffic Using Anomos « Torrent   -  12 Rules for Learning Foreign Languages in Record Time — The Only Post You’ll Ever Need   -  3 Ways of Getting Student Feedback to Improve Your Teaching   -  25 TED Talks that will change how you see the world   -  Home   -  We Are Built To Be Kind - YouTube   -  Trying Not to Try: How to Cultivate the Paradoxical Art of Spontaneity Through the Chinese Concept of Wu-Wei | Brain Pickings   -  Pronunciation   -  50 Life Secrets and Tips   -  30 Challenges for 30 Days   -  Literature UK | LearnEnglish Teens   -  Cambridge English Dictionary: Meanings & Definitions   -  How To Be Attractive