Redneck Dixon White Calls Out White America In Viral Video. A self-described "redneck" is taking the Internet by storm with his call for white Americans to stand up against racism, take responsibility for it and acknowledge that they've benefitted from it whether they've wanted to or not. 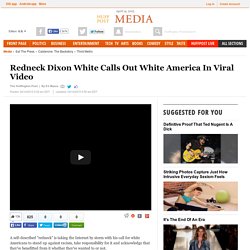 "This country was built for white people and it's time us Americans -- us white Americans -- came to terms with that and realize we're benefitting from that," the man who goes by the pseudonym Dixon White says in the clips, which contain some NSFW language. Structural biology: Pain-sensing TRPA1 channel resolved : Nature. How The Science Of Wasabi Could Pave The Way For New Pain Meds. Scientists have modeled the stunning structure of the receptor in our bodies that jolts our senses when we eat sushi garnished with spicy wasabi -- and it turns out that this so-called 'wasabi receptor' may hold clues for developing new pain treatments. 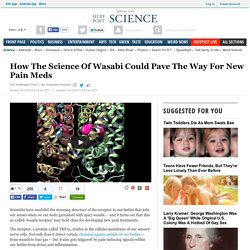 The receptor, a protein called TRPA1, resides in the cellular membrane of our sensory nerve cells. Not only does it detect certain chemical agents outside of our bodies -- from wasabi to tear gas -- but it also gets triggered by pain-inducing signals within our bodies from itches and inflammation. “The pain system is there to warn us when we need to avoid things that can cause injury, but also to enhance protective mechanisms,” Dr. David Julius, professor and chair of the physiology department at the University of California, San Francisco, and senior co-author of the new study, said in a written statement. Coloured Pluto comes into view - BBC News. The New Horizons probe, which is bearing down on Pluto, has captured its first colour image of the distant dwarf planet. 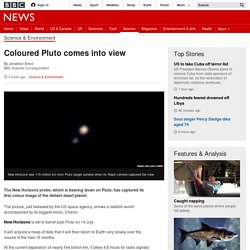 The picture, just released by the US space agency, shows a reddish world accompanied by its biggest moon, Charon. New Horizons is set to barrel past Pluto on 14 July. Pope Francis calls Armenian WW1 killings 'genocide' - BBC News. Turkey has recalled its envoy to the Vatican after Pope Francis described the mass killing of Armenians under Ottoman rule in WW1 as "genocide". 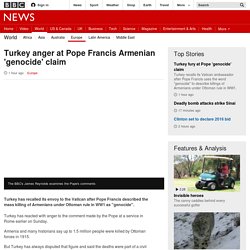 Turkey has reacted with anger to the comment made by the Pope at a service in Rome earlier on Sunday. Armenia and many historians say up to 1.5 million people were killed by Ottoman forces in 1915. But Turkey has always disputed that figure and said the deaths were part of a civil conflict triggered by WW1. The row has continued to sour relations between Armenia and Turkey. Hackers on Blackhat: Hollywood finally gets internet right. 16 January 2015Last updated at 17:37 ET. 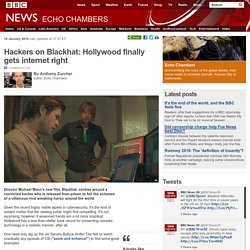 A global coalition working to make broadband affordable for all. Web We Want. Sir Tim Berners-Lee: World wide web needs bill of rights. 12 March 2014Last updated at 01:52 ET Sir Tim Berners-Lee wants more rights for users of the web The inventor of the world wide web has marked the 25th anniversary of his creation by calling for a 'Magna Carta' bill of rights to protect its users. 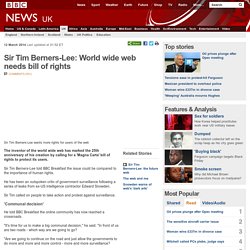 Sir Tim Berners-Lee told BBC Breakfast the issue could be compared to the importance of human rights. He has been an outspoken critic of government surveillance following a series of leaks from ex-US intelligence contractor Edward Snowden. Sir Tim called on people to take action and protest against surveillance. Scientists Propose Free 'Super Wifi' That Would Cover The UK. Scientists from the Karlsruhe Institute of Technology have proposed the idea that old unused TV spectrums could be turned into a massive 'Super WiFi' network that would provide free internet to the UK. 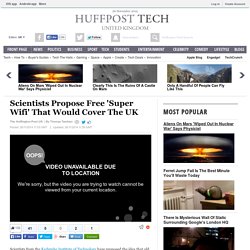 The research suggests that governments around the world (including the UK) could use existing TV spectrums that have are no longer in use to create a fast, powerful WiFi network that would cover the entire country. This 'Super WiFi' would have a number of significant benefits over the WiFi we find in our homes; it would be far more powerful, giving it a range of over 10 kilometres. It would also be immune to the same physical barriers that home routers suffer from like walls or floors.

The researchers are keen to stress however that this should be a worldwide debate, recommending that governments use it themselves to create a single unified network rather than simply auction off the unused spectrum to private companies. 'Ouija' Parody Is So Perfect It's Scary. 'SNL' Spoofs Obama Immigration With 'Schoolhouse Rock!' Cold Open. "Saturday Night Live" transported everyone back to their childhoods last night when it took on the classic educational program "Schoolhouse Rock! 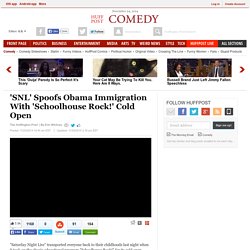 " for its cold open. The show spoofed the favorite "I'm Just A Bill" segment (because who doesn't love that song?) To comment on President Obama's immigration reform. Keenan Thompson played the titular bill and explained that he's an immigration bill that "one day might become a law. " But then Obama showed up and shoved poor Bill down the steps of Capital Hill. Bobby Moynihan's Executive Order, or as Obama says, an "easier way to get things done around here," had no idea that he's granting "legal status" to five million immigrants. 'Darwin's Dilemma' May Finally Have Been Resolved.

Though the theory of evolution has long been accepted as scientific fact, scientists have always had trouble reconciling Darwin's notion of gradual evolution by natural selection with a sudden explosion of new species around 530 million years ago. 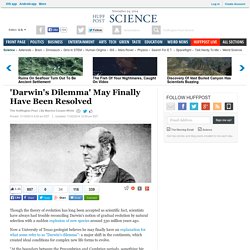 Now a University of Texas geologist believes he may finally have an explanation for what some refer to as "Darwin's dilemma": a major shift in the continents, which created ideal conditions for complex new life forms to evolve. “At the boundary between the Precambrian and Cambrian periods, something big happened tectonically that triggered the spreading of shallow ocean water across the continents, which is clearly tied in time and space to the sudden explosion of multicellular, hard-shelled life on the planet,” Dr. Ian Dalziel, a research professor at the university's Institute for Geophysics and a professor in the department of geological sciences, said in a written statement. 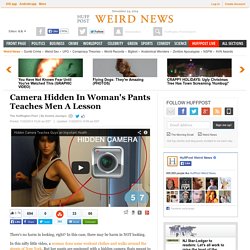 In this case, there may be harm in NOT looking. In this nifty little video, a woman dons some workout clothes and walks around the streets of New York. But her pants are equipped with a hidden camera thats meant to catch passersby -- both men and women -- gawking at her posterior. The lighthearted video captures dozens of people on the street looking in the direction of the camera. Talking Book trial to help 'poorest of poor' in Ghana. 20 November 2014Last updated at 12:22 ET By Leo Kelion Technology desk editor The pilot project involves 2,000 Talking Books, but more will be made if it succeeds Hundreds of handheld audio computers are to be given to some of Ghana's poorest communities to help spread potentially life-saving information.

The Talking Books will let families play sound files as well as make their own recordings, which can be shared with others or used to give feedback. Organisers plan to use the kit to teach people about Ebola, how to deal with diseased crops and the importance of breastfeeding, among other topics. Is it 'evil' that Google wants to change society?

What are Fractals? : FractalFoundation.org. The Tories Have Declared War on Society - Now Society Must Declare War on Them  It is hard to decide what was more repugnant at the Tory Party Conference recently: the sight of a packed auditorium in Birmingham applauding the prime minister's pledge to cut the benefits of 10million families, or the applause that greeted his pledge to scrap human rights legislation. Trying to fathom the mindset of those who get their jollies at the prospect of reducing millions of their fellow citizens to destitution is quite a challenge. But, nonetheless, if we are to understand the attributes of your average Tory, it is one that has to be taken on. In this regard the legendary words of Nye Bevan in 1948 have yet to be bettered.

Bevan asserted that: no amount of cajolery, and no attempts at ethical or social seduction, can eradicate from my heart a deep burning hatred for the Tory Party that inflicted those bitter experiences on me. The reality of Britain in 2014 is as stark as it gets. Autos - Flying bicycle seeks a second wind. If man were meant to fly, he’d have wings – or at minimum a Paravelo: half-bike, half-parasail flying machine that seamlessly melds extreme sports with eco-sensible transportation. The Paravelo is the brainchild of aviation-obsessed inventors John Foden and Yannick Read, the founders of XploreAir, located in suburban London.

Ironically enough, the founders’ workshop is a short walk from the original site of the long-defunct Sopwith Aviation Company, builders of the World War I-era Sopwith Camel. Despite falling short of goal on the crowd-funding site Kickstarter.com, Foden and Read refuse to let financial headwinds ground the development of their bike-cum-ultralight aircraft. “Obviously, it makes things slightly tricky, because all these kinds of projects need money,” says Foden. “But we’ll keep plugging away.” Brain repair 'may be boosted by curry spice' 8 American Dialects Most Brits Don't Know About. Minnie Driver and Matt Damon in ‘Good Will Hunting’ (Photo: Miramax) Before moving to the United States, many British expatriates may not be aware that—just like Britain itself—countless regional dialects make up their new adoptive country. Sure, most Brits are doubtless familiar with a generic form of New York, Southern and general American English, a.k.a. the accent of the nightly news, but—from one region to the next—America is jam-packed with a variety of words, phrases, and pronunciations much on the same scale as Old Blighty.

While the following list by no means encompasses all American dialects, and there are variations even within each dialect, it touches on some of the speech patterns of popular destinations for British expats. 1. Boston English When thinking of New England, the place that often springs to mind is New York. You may be a bit familiar with Boston English if you’ve seen the film Good Will Hunting (language NSFW at link). Punctuation Day: Why Do Brits Call a Period a Full Stop? That is a very full stop. Should you feel the need, today (September 24) is the perfect day to get out there and correct all of those silly grammatical errors you see everywhere you go.

There’s the grocer that puts an apostrophe in with his potatoes, the Facebook snark who uses speech-marks for emphasis so it looks like they’re unsure about everything they say, and worst of all, the grammar pedant who makes simple grammatical errors while correcting someone else’s simple grammatical errors. Under normal circumstances the best advice with any of these crimes against language is to leave well alone, but hey, it’s Punctuation Day.

If you can’t tear someone a new colon today (or semicolon, if you’re feeling merciful), when can you? WATCH: If Shakespearean Insults Were Used Today... John Malkovich Iconic Photo Recreations By Sandro Miller Are Simply Incredible. If you needed any further proof that John Malkovich is a total legend then here it is. John Malkovich. Museum reunion for Colossus computer veterans. 22 September 2014Last updated at 18:56 ET By Mark Ward Technology correspondent, BBC News The museum is seeking cash to turn its prototype into a fully fledged digital copy. Westboro Baptist Church Receives Rainbow Laces From Stonewall & Paddy Power. Westboro Baptist Church Trolled By Crowd-Funded 'God Loves Gays' Billboard. An crowd-funded project is sticking the proverbial middle one at the hate-filled Westboro Baptist Church (WSC) by planting this beauty right in their hometown...