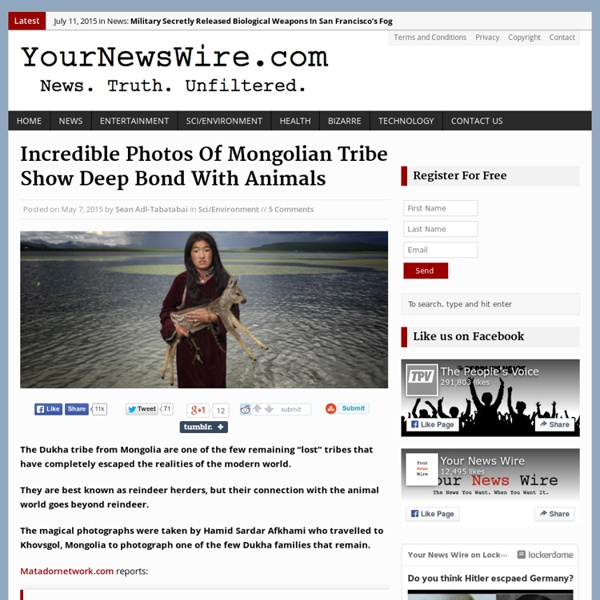 The Dukha tribe from Mongolia are one of the few remaining “lost” tribes that have completely escaped the realities of the modern world. They are best known as reindeer herders, but their connection with the animal world goes beyond reindeer. The magical photographs were taken by Hamid Sardar Afkhami who travelled to Khovsgol, Mongolia to photograph one of the few Dukha families that remain. Matadornetwork.com reports: The children of the tribe are raised surrounded by reindeer, and they build a close connection. The Dukha do not typically eat the reindeer unless the animals are no longer capable of helping them hunt or travel. Related:  Wonders • People Mongolia • Concerning ANIMALS

China Fences In Its Nomads, and an Ancient Life Withers Photo MADOI, China — If modern material comforts are the measure of success, then Gere, a 59-year-old former yak-and-sheep herder in China’s western Qinghai Province, should be a happy man. In the two years since the Chinese government forced him to sell his livestock and move into a squat concrete house here on the windswept Tibetan plateau, Gere and his family have acquired a washing machine, a refrigerator and a color television that beams Mandarin-language historical dramas into their whitewashed living room. But Gere, who like many Tibetans uses a single name, is filled with regret. “We don’t go hungry, but we have lost the life that our ancestors practiced for thousands of years,” he said. In what amounts to one of the most ambitious attempts made at social engineering, the Chinese government is in the final stages of a 15-year-old campaign to settle the millions of pastoralists who once roamed China’s vast borderlands. Continue reading the main story Not everyone is dissatisfied.

reddit: the front page of the internet 16 Of The Most Magnificent Trees In The World How do I love thee, tree? Let me count the ways; you change carbon dioxide into the oxygen we breathe, you sequester carbon, and you provide shelter for countless critters. There are many reasons for which we should all be tree-hugging hippies, but within the scope of this article, all we’ll focus on is how amazing some of them look. Granted, not all of these amazing beautiful trees are trees (the Wisteria is a vine, Rhododendrons are shrubs, and bamboo technically belongs to the grass family), but we’ll give them a pass because they are amazing, huge and beautiful. So once you step outside and take a breath of fresh air, hug the nearest tree and say thank you! If you know of an amazing tree not on this list, you can submit it at the bottom of this post. 125+ Year Old Rhododendron “Tree” In Canada This huge 125-year-oldold rhododendron is technically not a tree – most are considered to be shrubs. 144-Year-Old Wisteria In Japan Image credits: tungnam.com.hk Wind-Swept Trees In New Zealand

Rare White Whale Makes Surprise Appearance in New Zealand Scientists got a special thrill this week when they got to experience an unexpected encounter with a rare white humpback whale who made a surprising appearance off the coast of New Zealand. A research team with the New Zealand Department of Conservation (DOC) were out conducting an annual survey of humpback whales in Cook Strait to see how they are recovering after commercial whaling was banned in 1964. The whale they spotted is believed to be Migaloo, which is aboriginal for ‘white fella,’ who was first spotted off the coast of Australia in 1991 and has continued to make appearances there every year. According to a statement from the DOC, two whales were first spotted before the team realized one of them was very much not like the other. “I thought, wow that whale is white, that is amazing!” The white humpback whale with a normal humpback whale. The white whale’s distinctive dorsal fin and spiny protuberances behind the fin. “This is so unique. The white whale’s head.

Morin khuur The morin khuur (Mongolian: морин хуур), also known as horsehead fiddle, is a traditional Mongolian bowed stringed instrument. It is one of the most important musical instruments of the Mongol people, and is considered a symbol of the Mongolian nation. The morin khuur is one of the Masterpieces of the Oral and Intangible Heritage of Humanity identified by UNESCO. Name[edit] The full Classical Mongolian name for the morin khuur is morin toloγai tai quγur, ᠮᠣᠷᠢᠨ ᠲᠣᠯᠣᠭᠠᠢ ᠲᠠᠢ ᠬᠣᠭᠣᠷ, (which in modern Khalkh cyrillic is Морин толгойтой хуур) meaning fiddle with a horse's head. Construction[edit] The instrument consists of a trapezoid wooden-framed sound box to which two strings are attached. The bow is loosely strung with horse hair coated with larch or cedar wood resin, and is held from underneath with the right hand. Traditionally, the frame is covered with camel, goat, or sheep skin, in which case a small opening would be left in back. Morin khuur vary in form depending on region.

Disappearing Rusty Patched Bumble Bee is One Step Closer to Getting Protection Conservationists have been pushing for protection for a bumble bee that’s disappearing at an alarming rate and are now hopeful that it will get the help it needs as the first bee species to be protected under the Endangered Species Act. The rusty patched bumble bee, which can be identified by a rust-colored patch on its abdomen, was once a commonly seen pollinator from the midwest to the east coast, but scientists believe that it has disappeared from 87 percent of its historic range and that its population has declined by a startling 95 percent in just the past few decades. According to the Xerces Society for Invertebrate Conservation their main threats include pesticides, habitat loss, climate change and disease, but one of their biggest problems now may also be attributed to the spread of pathogens from bees who are raised and sold commercially to wild bumble bees. In 2013, the Xerces Society the U.S.

22 Unbelievable Places that are Hard to Believe Really Exist Our world is so full of wonders that new and amazing places are discovered every day, be that by professional photographers or amateurs. Different geographical locations, climatic conditions and even seasons offer the widest variety of natural wonders: pink lakes, stunning lavender or tulip fields, breath-taking canyons and mountains, and other places you can hardly believe actually exist! [Read more...] Some of the pictures in this collection will be of all natural sights you can find while traveling around the world, while the others have experienced human interference – but even in these cases, the result of such collaboration is spectacular. No wonder that traveling in one of the best forms of recreation – even looking at these pictures takes your mind to far away places… And yes, all those of those places are real! Feel free to add more places in the comments under the article. Tunnel of Love, Ukraine Image credits: Oleg Gordienko Tulip Fields in Netherlands Image credits: dadi360

The adorable “sea bunny” - a nudibranch It’s round, and fluffy and has wiggly little ears! Sort of. These little sea creatures, affectionately dubbed “sea bunnies” have recently become social media celebrities. They’re actually sea slugs, and belong to the wild group of mollusks called nudibranchs. The bunny slug species is Jorunna parva, and was first described by the renowned Japanese marine biologist Kikutaro Baba. ダイブストアエグザイル/Video screen capture As for the “ears”—over on Deep Sea News, Dr. Crawl Ray/CC BY 2.0 All nudibranchs are hermaphrodites, which means they produce both sperm and eggs but cannot fertilize themselves. Jorunna parva have a number of different colorings, and are often yellow with black specks and rhinophores. If there wasn’t enough reason to “aawwww” over sea bunnies, the fact that these creatures are incredibly tiny adds extra points to their adorableness score. And in case your day hasn't had enough bunny cuteness from Japan, check out this island full of (land) rabbits.

Traditional Instruments and Music of the Mongolia people - text in English The traditional Mongolian Folk music is influenced by the large variety of tribes, having been united for the first time in the 13th century under the rule of Genghis Khan with Turkish tribes in order to establish the Mongolian people. The nomad shepherds in Mongolia, like other nomads in Central Asia, use to play string and wind instruments. Percussion instruments, though, were only played in connection with Shamanism and Buddhism, the origins of which can be found in Tibetan Lamaism, as well as with the "Tsam dance", which was performed in Mongolia for the first time in the 8th century. - khuuchir - yoochin - yatga - Vocal music - Urtyin duu (long song) - melismatic and richly ornamented, with a slow tempo, long melodic lines, wide intervals and no fixed rhythm. It is sung in verses, without a regular refrain and with a full voice in the highest register. There are three categories of long songs - Bogin duu (short song) - strophic, syllabic, rhythmically tied, sung without ornaments. Dance