This 390-year-old bonsai tree survived an atomic bomb, and no one knew until 2001 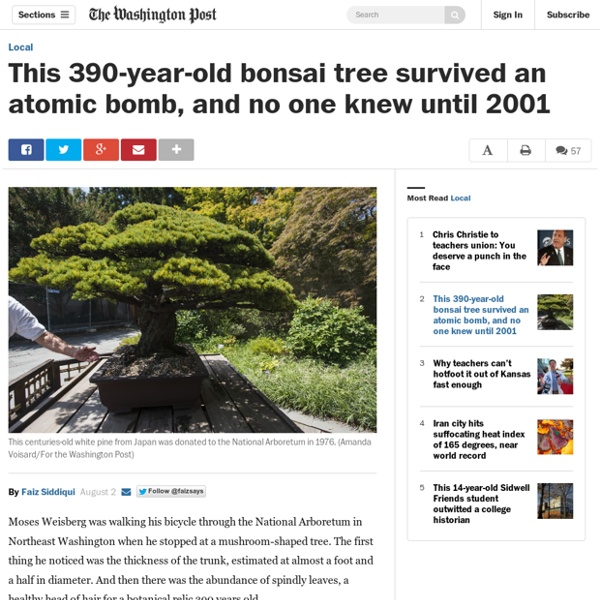 Moses Weisberg was walking his bicycle through the National Arboretum in Northeast Washington when he stopped at a mushroom-shaped tree. The first thing he noticed was the thickness of the trunk, estimated at almost a foot and a half in diameter. And then there was the abundance of spindly leaves, a healthy head of hair for a botanical relic 390 years old. But it was only when he learned the full history of the tree, a Japanese white pine donated in 1976, that he was truly stunned. “For one, it’s amazing to think that something could have survived an atomic blast,” said Weisberg, a 26-year-old student at the Georgetown University Law Center. The bonsai tree’s history is being honored this week, as Thursday marks the 70th anniversary of the Hiroshima bombing. The tree, donated by a bonsai master named Masaru Yamaki, was part of a 53-specimen gift to the United States for its 1976 bicentennial. Ensuring the continued survival of such an important piece of the collection is no easy task. Related:  Wonders • People Japan

Tree Encyclopedia 2 clicks to really open Trees have three principle features that distinguish them from all other plants. First, they have a woody stem, roots and branches which do not die back in winter, but continue to grow year after year. From the moment of its germination, a tree remains visible; from the tallest Sequoia to the smallest garden fruit tree, this principle of growth remains constant. Trees live longer than any other organism on earth. Trees commonly live more than 1,000 years, and many grow considerably older. A bristlecone pine, Pinus longaeva, at Schulman Grove in California has been documented both by core drilling (a pencil-thin core is taken from the tree’s trunk, and the rings are counted) and by carbon-dating as being 4,700 years old. Pando (Latin for “I spread”), aka “the trembling giant,” is a clone colony of male quaking aspen, (Populus tremuloides) a single living organism identified by identical genetic markers. Family Aceraceae: Maples are some of our most familiar and beloved trees.

Tiny Kingdoms: Artist crafts bonsai like you’ve never seen before (Image credit: Takanori Aiba) By Mariella Moon, Tecca If you think all bonsai look like mini trees in somebody's zen garden, you haven't seen Takanori Aiba's pieces yet. The Japanese artist combines bonsai art form with Lilliputian architecture design to create some of the most stunning pieces you will ever see. On his website, Aiba says his crossover creations are the fruit of his days as a (plain) bonsai maker and maze illustrator. So just how much time does he take to create one of these exactly? Unfortunately, you have to go to Japan if you want to see these artworks in person. More on Tecca:

10 Things You Probably Didn't Know About Fireflies Taking a walk after dark in the Catskill mountains of New York state last fall, I was fascinated by the number of bright blinking lights flashing all around me. I grew up in England, and now live in California, and had never witnessed such a magical display of fireflies. Here are 10 things you probably didn’t know about these fascinating creatures. 1. 2. 3. 4. Photo Credit: thinkstock 5. 6. 7. 8. 9. 10. You can find out even more about fireflies by watching this video: The Ancient Japanese | History | Articles Jomon Period: 10,000 B.C. – 400 BC Stable living patterns began to appear in Japan with the arrival of the Jomon people around 10,000 B.C. People during this period began to make open-pit fired clay vessels and decorated them with patterns made by pressing wet clay with unbraided or braided sticks and plaited cord. The pottery techniques of the Jomon were very advanced and characteristic of Neolithic cultures although the Jomon were a Mesolithic, Middle Stone Age, people. The period is named after their pottery methods as the word Jomon means "patterns of plaited cord". The Jomon period is typically divided into six different eras; the Incipient, Initial, Early, Middle, Late, and Final periods. Incipient Jomon: 10,000 B.C. - 8,000 B.C.The only archaeological evidence found for the Incipient Jomon era is pottery fragments found in the Kanto plain. Initial Jomon: 8,000 B.C. - 5,000 B.C.Pots were produced for cooking and boiling food. Photos of Jomon period artifacts Nara Period: 710 – 794

Espècies de Bonsai Indoor Bonsai are normally tropical and sub-tropical species, that can survive indoors in the more temperate parts of the world, where we normally have a heated living environment where they can survive provided off-course that we can also supply them with their other requirements of suitable for healthy growth such as light and humidity. Desert Rose, Mock Azalea, Impala Lilly Adenium obesum originates from East Africa but is found widely cultivated in tropical regions as a garden and house plant because of it lovely variously coloured star shaped flowers. Pea Tree Native to Manchuria and Siberia and also naturalised in France the Pea Tree is hardy to zone 2. Fukien Tea Tree, Carmona, Philippine Tea Carmona microphylla species is Native to India, South East Asia and Southern China. Jade Tree, Money Tree, Elephant Tree Jade Tree is considered to be an auspicious tree in many parts of the orient, bringing the grower health and prosperity. Bonsai Crassula Banyan Fig, Bengal Fig, Banyan Gardenia

How a Musician Unraveled the Secrets of Whale Song Whale songs are some of the most hauntingly beautiful and bizarre noises in the world. But if it hadn’t been for acoustic biologist Katy Payne, we’d probably still be dismissing them as mere sounds — like the noises our own cats and dogs make when they’re hungry, frightened, interested, or affectionate. Payne, however, realized that whales are actually composing songs, not just making noise under the sea, and moreover, she found that over time, whales change their tune. These majestic marine mammals interact with each other to create songs of escalating length and complexity over the years, in what one might compare to jazz riffing or Indigenous Australian songlines, the cultural, social, and physical maps passed down through generations. Payne’s discoveries, and ongoing research into the subject, reveal the value of cross-disciplinary collaborations. Her research helped to improve our understanding of whales and the way they interact with each other.

DAWN REDWOOD BONSAI FOREST | bonsai supplies Personal Forest Bring the essence of nature and meditative relaxation to your life with this engaging bonsai kit. It contains everything you need to cultivate a grove of miniature trees that you foster along, from seedling to bonsai forest—redwood and moss seeds, growing medium, seedling training pots, bonsai shears, river stones, detailed directions, and a recycled US steel grow box. These tiny trees are actually ancestors of the giant California redwood. Click here and here for more bonsai trees! Unfortunately, this item cannot ship outside of the United States at this time.

Might Alien Life Evolve Like the Incredible Octopus? by Natalie Shoemaker Consider the octopus: a creepy skeleton-less creature with limbs that have regenerative properties and a mind of their own. Its structure — inside and out — makes it like no other animal on earth. As a part of the Mollusca phylum, the octopus seems so far removed from its clam cousin. Neurobiologist Benny Hochner, from the Hebrew University of Jerusalem in Israel, talked about this oddity in an interview with Alison Abbott from Nature: “Very simple molluscs like the clam — they just sit in the mud, filtering food. Scientists have marveled at the octopus for years, and now they've taken the time to delve deeper into its biology by decoding its genome. "The octopus appears so utterly different from all other animals, even ones it's related to, that the British zoologist Martin Wells famously called it an alien. “It’s important for us to know the genome, because it gives us insights into how the sophisticated cognitive skills of octopuses evolved.”