How to Tie Climbing Knots 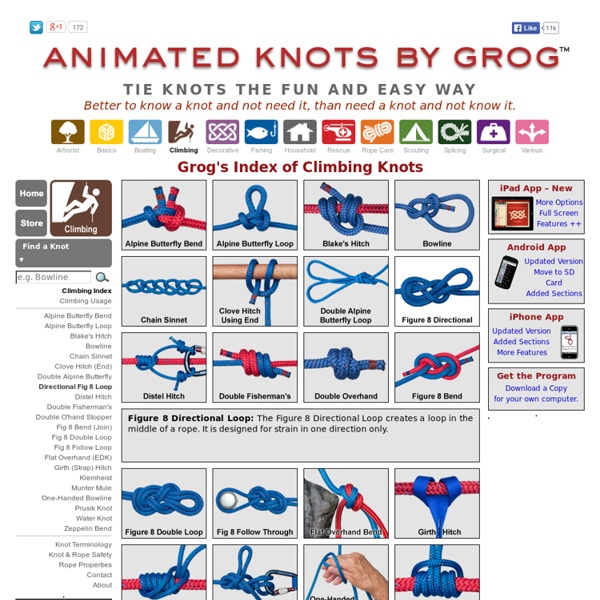 Climbing Knots Welcome to Climbing Knots These animated knots are for climbers, rescue workers, arborists, tower-climbers, and others who use rope in man-carrying applications. Select the knots from: the index above left; the pictures above; or the Climbing Usage page. Selection This selection is based on consultation with, and feedback from, many experienced climbers. Omissions The Overhand Knot and the Figure 8 Knot, which both underlie other Climbing Knots, are included in the Basics Section. Deaths Climbing, caving, etc., are challenging and dangerous. Climbing Ropes A climbing rope is typically about 60 meters, or 200 feet, long. Static ropes are more durable, more resistant to abrasion, and lack elasticity. Links Modern Alternatives Descent devices such as Brake Bar Racks and "8" rings are kinder to the Static rope and easier to manage than a Munter Hitch. Learn Your Knots: The Life They Save May Be Your Own

Trilene Knot - How to tie a Trilene Knot © Copyright 2014 John E Sherry. All rights reserved Disclaimer: Any activity involving rope can be dangerous and may even be life threatening! Knot illustrations contained in this web site are not intended for rock climbing instruction. Many knots are not suitable for the risks involved in climbing. Seek professional instruction.

Ziplock method for DUI checkpoints be amazed By Mike Sawyer | Free Thought Project CHIEFLAND, FL — In a video posted to YouTube this week, a novel and simply astonishing example of how to deal with DUI checkpoints, was illustrated by the guys from FairDUI.org. Sobriety checkpoints — also known as DUI checkpoints — are the most common roadblocks you might encounter. 21-websites-that-will-make-your-smarter-every-way It’s almost unbelievable that in this day and age almost everyone is carrying around a library of knowledge, richer in resources than that of the Library of Alexandria. So it comes as no surprise that many want to utilise this resource, the internet, to become a better, smarter, productive being! With this in mind, 19 of the top websites that will make you a smart person, in every way, has been compiled for you. Academic 1. Smarterer

Everyday Tricks Everyone Should Know Tricks every woman should know…Nik The last several are a few of my own I’ve discovered… Peel a banana from the bottom and you won’t have to pick the little ‘stringy things’ off of it. Constrictor knot History[edit] First called "constrictor knot" in Clifford Ashley's 1944 work The Ashley Book of Knots, this knot likely dates back much further.[5] Although Ashley seemed to imply that he had invented the constrictor knot over 25 years before publishing The Ashley Book of Knots,[1] research indicates that he was not its originator.[6] Ashley's publication of the knot did bring it to wider attention.[7] Although the description is not entirely without ambiguity, the constrictor knot is thought to have appeared under the name "gunner's knot" in the 1866 work The Book of Knots,[8][9] written under the pseudonym Tom Bowling.[10] in relation to the clove hitch, which he illustrated and called the "builder's knot". He wrote, "The Gunner's knot (of which we do not give a diagram) only differs from the builder's knot, by the ends of the cords being simply knotted before being brought from under the loop which crosses them."[11] Oddly, when J.

Camping Knots for Wilderness Survival By Filip Tkaczyk Knowing how to tie good camping knots is an invaluable skill in wilderness survival situations. Its also a great asset when having fun in the outdoors. 10 Poisons Used To Kill People Crime Poison is definitely among fiction’s greatest weapons. Hercule Poirot and Sherlock Holmes seem to have developed the audience’s taste for untraceable, fast-acting poisons. BBQ Toolbox : Testosterone fuelled outdoor cooking*. If you’re cooking alfresco, get the right tool for the job. A BBQ that looks like a classic metal toolbox. Folds up with a convenient carrying handle for easy transportation to the park or beach. Unfolds to reveal a warming rack and storage tray for your extra hot chilli sauce. A whopping 8x15” stainless steel grill area. Removable fuel tray for your charcoal, and adjustable vent to control the flow of oxygen over the hot coals.