Teaching and Learning: Using iPads in the Classroom 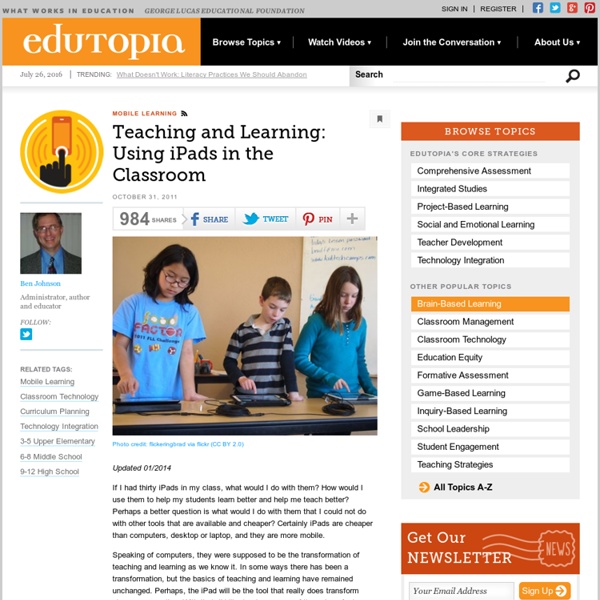 Updated 01/2014 If I had thirty iPads in my class, what would I do with them? How would I use them to help my students learn better and help me teach better? Perhaps a better question is what would I do with them that I could not do with other tools that are available and cheaper? Certainly iPads are cheaper than computers, desktop or laptop, and they are more mobile. Speaking of computers, they were supposed to be the transformation of teaching and learning as we know it. Kinesthetic Learners The iPad has a number of unique features that provide for interesting possibilities in teaching and learning. As a completely portable learning tool, the iPad camera allows documentation to be taken to a whole different level. Students can also attach videos, and voice recordings to their field notes. In math class the GPS of the iPad establishes locale in ways that are profound. Connecting Beyond the Classroom How do you use iPads in the classroom to help teaching and learning?

It's the Pedagogy, Stupid: Lessons from an iPad Lending Program Recently, we were tasked with developing policies and procedures for an equipment lending program initiated within the Faculty Technology Resources Center at the University of Cincinnati. The program was conceived as a method for encouraging the use of technology in the classroom. By loaning equipment to faculty for an academic term, we would encourage them to evaluate—and hopefully innovate—the utility of various "cutting edge" technologies with no financial risks to themselves or their departments.

Digital textbooks open a new chapter South Korea, one of the world's highest-rated education systems, aims to consolidate its position by digitising its entire curriculum. By 2015, it wants to be able to deliver all its curriculum materials in a digital form through computers. The information that would once have been in paper textbooks will be delivered on screen. South Korea's Minister of Education, Science and Technology, Ju-Ho Lee, said that his department was preparing a promotion strategy for "Smart Education", focusing on customised learning and teaching. The project, launched during the summer, will involve wireless networks in all schools to allow students to learn "whenever and wherever", as well as an education information system that can run in a variety of devices including PCs, laptops, tablets and internet-connected TVs.

iPads, iPod Touches, and iPhones as Assistive Technology in Education 3/28/2011 By: by Eric Lawson The recent release of Apple’s iPad has opened up some great new ideas and creative paths for teachers looking for assistive technologies (AT) for their classroom. Tactile learners and digital natives alike love to use these handheld devices to learn about core curriculum standards within the classroom. According to Apple's website, “iPod touch and iPhone use a high-resolution Multi-Touch screen, ideal for those who have difficulty using a traditional keyboard and mouse.”

Rover Flash Browser for iPad Mobile Apps | News iSwiFTER Releases Rover Flash Browser for iPad In an effort to enable Flash-based content for iPads, iSWiFTER Learn has developed a new browser app, called Rover, specifically designed for educators and students that offers both pre-selected learning content and filtered web browsing. Flash content is typically not compatible with standard iPad browsers. Rover is currently available as a free download on the app store. Mobile Learning Technologies for 21st Century Classrooms By Jonathan Wylie The mobile revolution is here. More and more schools are moving toward mobile learning in the classroom as a way to take advantage of a new wave of electronic devices that offer portability and ease of use on a budget. Netbooks, iPads, cell phones, iPods, e-readers and even PDAs are increasingly becoming the tools of choice for today's educators, and it is easy to see why.

Pedagogy and the iPad « Northern Arizona University's e-Learning Center by John J. Doherty and Kevin Ketchner Perhaps the hardest part of owning an iPad is trying to avoid the addictive world of Angry Birds, the favorite game app of the new British Prime Minister. Report details problems with full-time virtual schools - The Answer Sheet Posted at 11:23 AM ET, 10/25/2011 Oct 25, 2011 03:23 PM EDT TheWashingtonPost With millions of public high school students taking at least one course online, a new report says that virtual schools are too often subject to minimal oversight and that there is no-high quality research showing that cyber education is an acceptable full-time replacement for traditional classrooms.

Creating Books on the iPad Book Creator for iPad: $7.49The simple way to create your own beautiful iBooks, right on the iPad. Read them in iBooks, send them to your friends, or submit them to the iBookstore. Ideal for children’s picture books, photo books, art books, cook books, manuals, textbooks, and the list goes on. eBook Creator: $4.49 ‘eBook Creator’ is a simple and easy ebook creation application. It's interface is designed for all ages and skill levels so that young kids are able to make ebooks using the app. The Ultimate Guide To Using iPads In The Classroom How Students Benefit From Using Social Media 14.60K Views 0 Likes A lot of criticism has been leveled at social media and the effect it has on the way students process and retain information, as well as how distracting it can be. However, social media offers plenty of opportunities for learning and interactivity, and if you take a moment to think about it, it's not too hard to see how students benefit from using social media. 100 Web 2.0 Tools Every Teacher Should Know About 44.24K Views 0 Likes

Elementary Students Use iPod Touch To Learn – The Authority in Online Education A handheld device once considered a form of entertainment has made its way into a South Dakota elementary school; students at Lowell Math Science and Technology school have each been assigned their own iPod Touch to use in the classroom. The Sioux Falls school district purchased the devices for about $80,000 with a federal grant provided to schools with low reading and math assessment scores and school districts with a high percentage of low-income families. Each iPod cost about $220, significantly less than it would have cost the school to purchase laptop computers. 1:1 iPad use in Full Day Kindergarten Background This is the first year of 1:1 iPads in my kindergarten classroom. In October 2010 I received one to use with my class of 26, and by the end of May 2011 I had 11 and my class had dropped down to 22 children. I absolutely loved that half the class could be working on the iPads completely independently, at various levels, while I worked with the other half of the kids. The ability level of the children in last years class was more varied than typical. The iPads were a life saver for me and allowed a greater level of differentiation than I could have done on my own- definitely to the benefit of the children.

7 Myths About BYOD Debunked BYOD | Viewpoint 7 Myths About BYOD Debunked Lisa Nielsen, the author of "Teaching Generation Text: Using Cell Phones to Enhance Learning" and "The Innovative Educator" blog, believes it is time to shatter a few myths about students bringing their own devices (BYOD) to school. By Lisa Nielsen11/09/11 More than a decade into the 21st century and we are still keeping learners and teachers prisoners of the analog past by enforcing outdated mandates that ban and block them from using the digital resources of their world.

Blooms and iPad Applications I just got tweeted a nice diagram showing iPad applications against different levels of Bloom’s revised taxonomy. Its a good and well considered diagram and I like it. Some applications there that I haven’t seen yet and I will have to look up.