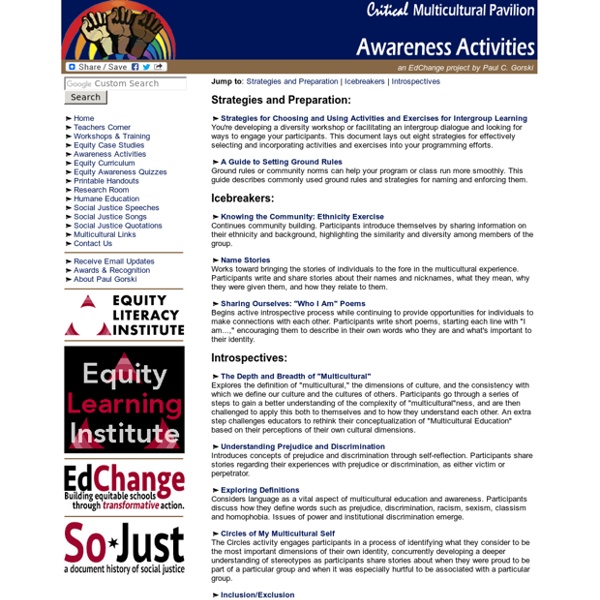 Jump to: Strategies and Preparation | Icebreakers | Introspectives Strategies and Preparation: Strategies for Choosing and Using Activities and Exercises for Intergroup LearningYou're developing a diversity workshop or facilitating an intergroup dialogue and looking for ways to engage your participants. This document lays out eight strategies for effectively selecting and incorporating activities and exercises into your programming efforts. A Guide to Setting Ground RulesGround rules or community norms can help your program or class run more smoothly. This guide describes commonly used ground rules and strategies for naming and enforcing them. Icebreakers: Getting Started: Respect ExerciseIntroduces the first crucial step in discussing multicultural issues: building a community of respect. Knowing the Community: Ethnicity ExerciseContinues community building. Name StoriesWorks toward bringing the stories of individuals to the fore in the multicultural experience. Introspectives:

Chris Rock on Ferguson, Cosby, and Obama What’s killing comedy.What’s saving America. Photographs by Martin Schoeller The last time Frank Rich had a conversation with Chris Rock was in early 1996, when they and the 1950s teen heartthrob Pat Boone were thrown together in a New York television studio as panelists on Bill Maher’s old show Politically Incorrect. Film language When you’re making a film you should use the camera and editing to help your audience know what’s happening and what your characters are doing, thinking and feeling. You need to make sure that you have a variety of shots, usually including * long shots * mid shots * closeups Things you can use to help you plan are

Census 2011: religion, race and qualifications - see how England & Wales have changed How have England & Wales changed in the last decade? Today we get a pretty good idea as the Office for National Statistics releases the first detailed results of the 2011 census. If you want to find out what religions we practice, how many of us are mixed-race, where we come from or whether we work, this is the place to do it. Here's what we know today: • Four out of every five (81%, 45.5 million) described themselves as being in good or very good health• 10% (5.8 million) of residents of England and Wales provided unpaid care for someone with an illness or disability. How Can Your Librarian Help Bolster Brain-Based Teaching Practices? Flickr/Kevin Harber Inquiry-based learning has been around in education circles for a long time, but many teachers and schools gradually moved away from it during the heyday of No Child Left Behind. The pendulum is beginning to swing back towards an inquiry-based approach to instruction thanks to standards such as Common Core State Standards for math and English Language Arts, the Next Generation Science Standards and the College, Career and Civic Life (C3) Framework for Social Studies State Standards. Transitioning to this style of teaching requires students to take a more active role and asks teachers to step back into a supportive position.

How many poor children go to faith schools? How much do faith schools reflect their local communities? Are they becoming middle class islands in poorer areas? Andrew Brown writes that: A faith character is often taken to be a signal of a good or successful school. Once that happens, the process will be self-sustaining in the Darwinian world of modern education, where schools must compete for success or die The Pedagogy Project We are so proud and excited to announce the Pedagogy Project! This project started when several professors asked for specific suggestions on digital or collaborative projects they could do with their students. We asked the HASTAC Scholars to provide specific assignments, in-class exercises and other projects. The response was awesome - over 80 specific and proven suggestions to shake up your syllabus! The Pedagogy Project is organized into nine sections, with numerous examples of projects, assignments and concepts in each area.

4-word-build, A Conflict Resolution Exercise and Teamwork Exercise Written for the Trainers and Facilitators section - Newsletter 1 inShare5 4-Word-Build is an excellent conflict resolution exercise to elicit a shared understanding, or a shared vision of an idea or concept. It also identifies that we usually do not have such a shared vision - but that we can create one. The exercise can also provide an insight into the ways in which decisions are made within any given team or group, and as such is an excellent teamwork exercise. Choose a word, idea or concept that you want the group to explore.

I went to Africa and all I got were these pictures In case you’re interested in hearing from a reformed Gurl - here’s Pippa Biddle’s experience. Worth a read. White people aren’t told that the color of their skin is a problem very often. We sail through police check points, don’t garner sideways glances in affluent neighborhoods, and are generally understood to be predispositioned for success based on a physical characteristic (the color of our skin) we have little control over beyond sunscreen and tanning oil. After six years of working in and traveling through a number of different countries where white people are in the numerical minority, I’ve come to realize that there is one place being white is not only a hindrance, but negative — most of the developing world. Five-Minute Film Festival: Genius Hour Imagine if you were allowed to use a whole workday every week to explore any project you wanted. With no restrictions on your time or what you could do, think of the ideas you could come up with and the things you could learn about! In the workplace, this practice is called 20 percent time.

Secondary schools league tables: the data for each school and local authority The secondary school league tables are out today and we have extracted the key data for you to download and compare for yourself. We write today that More than 100 of England's secondary schools face being closed and re-opened as academies for failing government targets So, what does the data include? The tables cover more than 3,300 secondary schools and give a comprehensive guide to Key Stage four and Key Stage five results - GCSEs and A-level results in every school in England. Go to the Department for Education site and you will find a bewildering array of spreadsheets and CSV files to download.

The Problem With Little White Girls, Boys and Voluntourism  White people aren’t told that the color of their skin is a problem very often. We sail through police check points, don’t garner sideways glances in affluent neighborhoods, and are generally understood to be predispositioned for success based on a physical characteristic (the color of our skin) we have little control over beyond sunscreen and tanning oil. After six years of working in and traveling through a number of different countries where white people are in the numerical minority, I’ve come to realize that there is one place being white is not only a hindrance, but negative — most of the developing world.