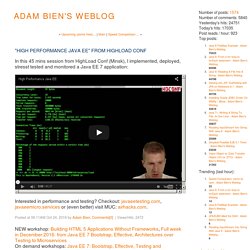 Last updated Oct. 3, 2016 EDITORIAL NOTE: It’s been a while since Java 8 is out in the public and everything points to the fact that this is a really major release. 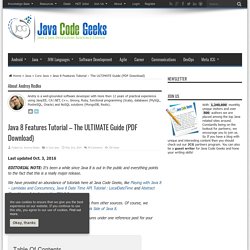 We have provided an abundance of tutorials here at Java Code Geeks, like Playing with Java 8 – Lambdas and Concurrency, Java 8 Date Time API Tutorial : LocalDateTime and Abstract Class Versus Interface in the JDK 8 Era. We also referenced 15 Must Read Java 8 Tutorials from other sources. Of course, we examined some of the shortfalls also, like The Dark Side of Java 8. Now, it is time to gather all the major Java 8 features under one reference post for your reading pleasure. Java Programming Courses. VirtualBox Tutorial: Virtualization Essentials Oracle VM VirtualBox is a free and open-source hypervisor for x86 computers from Oracle Corporation. 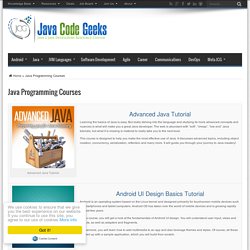 VirtualBox may be installed on a number of host operating systems, including: Linux, OS X, Windows, Solaris, and OpenSolaris. There are also ports to FreeBSD and Genode. Java Concurrency Essentials Tutorial. Course Overview Concurrency is always a challenge for developers and writing concurrent programs can be extremely hard. 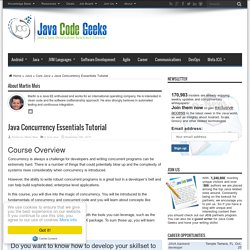 There is a number of things that could potentially blow up and the complexity of systems rises considerably when concurrency is introduced. However, the ability to write robust concurrent programs is a great tool in a developer’s belt and can help build sophisticated, enterprise level applications. In this course, you will dive into the magic of concurrency. Java 8 Streams: An Intro to Filter, Map and Reduce Operations.

If you’re a strong Java developer who wants to contribute to our coverage, get in touch with a few ideas for articles you’d like to write. 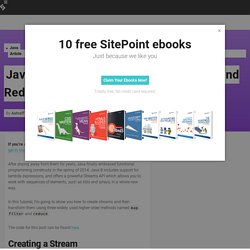 After shying away from them for years, Java finally embraced functional programming constructs in the spring of 2014. Java 8 includes support for lambda expressions, and offers a powerful Streams API which allows you to work with sequences of elements, such as lists and arrays, in a whole new way. Job search: The most extensive job network - Jobillico. Devoxx Poland 2016 - Simon Ritter - Project Jigsaw in JDK 9: Modularity Comes To Java. The Basics of Web Application Security. Modern web development has many challenges, and of those security is both very important and often under-emphasized. 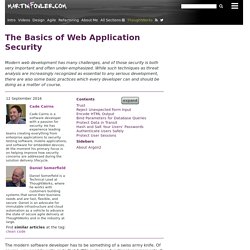 While such techniques as threat analysis are increasingly recognized as essential to any serious development, there are also some basic practices which every developer can and should be doing as a matter of course. The modern software developer has to be something of a swiss army knife. Of course, you need to write code that fulfills customer functional requirements. It needs to be fast. Applying Java 8 Idioms to Existing Code. Learn more about Kotlin, a new programming language designed to solve problems that software developers face every day brought to you in partnership with JetBrains. 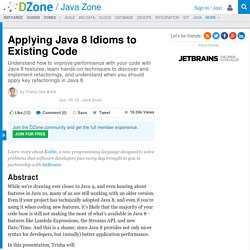 Abstract While we’re drawing ever closer to Java 9, and even hearing about features in Java 10, many of us are still working with an older version. 13 Decks Java Developers Must See to Stay Updated. From the Takipi blog So many presentations to see, so little spare time… There are many key figures in the Java domain, each with his own perspective and opinions about the future of the language. 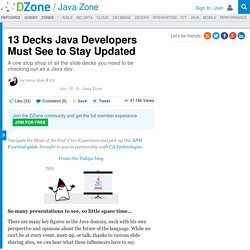 While we can’t be at every event, meet-up, or talk, thanks to various slide sharing sites, we can hear what these influencers have to say. Java 8: Writing asynchronous code with CompletableFuture. Java 8 introduced a lot of cool features, whereas lambdas and streams caught much of the attention. 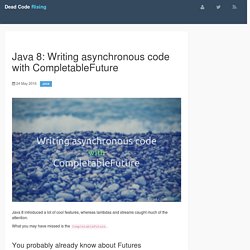 What you may have missed is the CompletableFuture. You probably already know about Futures A Future represents the pending result of an asynchronous computation. It offers a method — get — that returns the result of the computation when it's done. Java 8 Lambdas Hacking: interviewing the java expert. What are some cool Java tricks? - Quora.