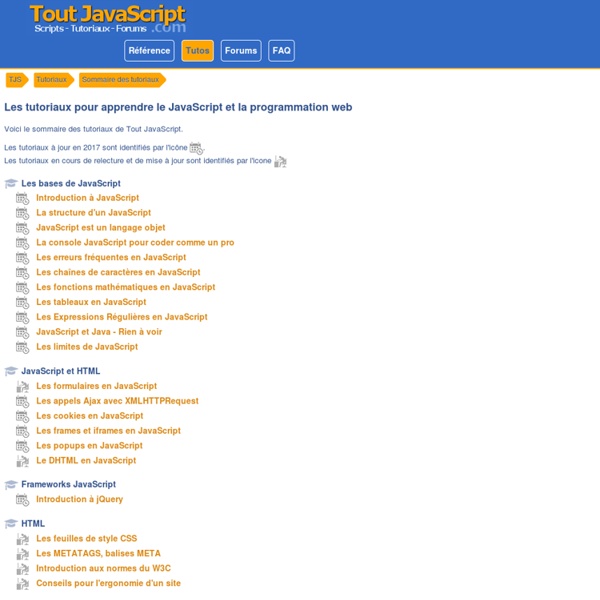 JavaScript Web APIs While the most common scripting language ECMAscript (more widely known as JavaScript) is developed by Ecma, a great many of the APIs made available in browsers have been defined at W3C. What is scripting? A script is program code that doesn’t need pre-processing (e.g. compiling) before being run. keyCodes When a KeyboardEvent fires, you can test which key was pressed because that event contains information you can write logic against. document.addEventListener("keydown", function(event) { console.log(event.which); } For example, by pressing "a", you'll get 65. Apparently it's best to write logic against which, as keyCode and charCode are complicated: The event.which property normalizes event.keyCode and event.charCode. It is recommended to watch event.which for keyboard key input.

Reading local files in JavaScript Introduction HTML5 finally provides a standard way to interact with local files, via the File API specification. As example of its capabilities, the File API could be used to create a thumbnail preview of images as they're being sent to the server, or allow an app to save a file reference while the user is offline. Additionally, you could use client-side logic to verify an upload's mimetype matches its file extension or restrict the size of an upload. The spec provides several interfaces for accessing files from a 'local' filesystem: File - an individual file; provides readonly information such as name, file size, mimetype, and a reference to the file handle.

Processes and Threads (The Java™ Tutorials > Essential Classes > Concurrency) In concurrent programming, there are two basic units of execution: processes and threads. In the Java programming language, concurrent programming is mostly concerned with threads. However, processes are also important. A computer system normally has many active processes and threads. Starting Another Activity After completing the previous lesson, you have an app that shows an activity (a single screen) with a text field and a button. In this lesson, you’ll add some code to MyActivity that starts a new activity when the user clicks the Send button. Respond to the Send Button Next, you’ll fill in this method to read the contents of the text field and deliver that text to another activity. Build an Intent With this new code, the complete sendMessage() method that's invoked by the Send button now looks like this:

About the iOS Technologies iOS is the operating system that runs on iPad, iPhone, and iPod touch devices. The operating system manages the device hardware and provides the technologies required to implement native apps. The operating system also ships with various system apps, such as Phone, Mail, and Safari, that provide standard system services to the user. The iOS Software Development Kit (SDK) contains the tools and interfaces needed to develop, install, run, and test native apps that appear on an iOS device’s Home screen. Native apps are built using the iOS system frameworks and Objective-C language and run directly on iOS.