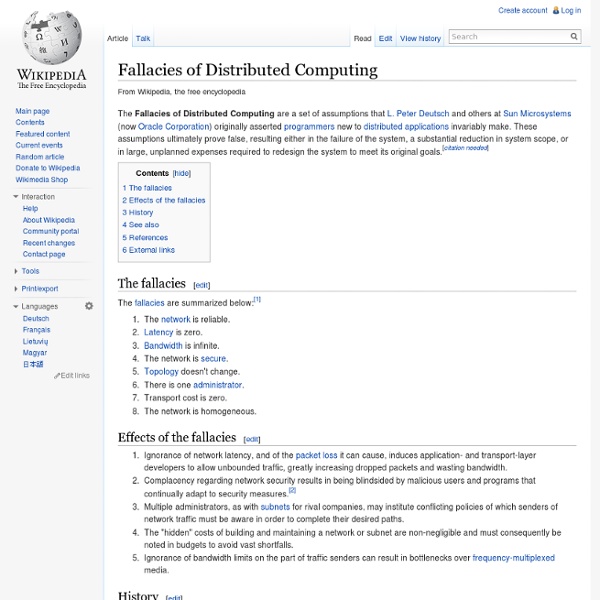 The Fallacies of Distributed Computing are a set of assumptions that L. Peter Deutsch and others at Sun Microsystems (now Oracle Corporation) originally asserted programmers new to distributed applications invariably make. These assumptions ultimately prove false, resulting either in the failure of the system, a substantial reduction in system scope, or in large, unplanned expenses required to redesign the system to meet its original goals. The fallacies[edit] The fallacies are summarized below:[1] Effects of the fallacies[edit] History[edit] See also[edit] References[edit] External links[edit]

Eric Brewer (scientist) Eric A. Brewer is the main inventor of a wireless networking scheme called WiLDNet which promises to bring low-cost connectivity to rural areas of the developing world. He was made a tenured professor at UC Berkeley. In 1996, Brewer co-founded Inktomi Corporation. He is known for formulating the CAP Theorem about distributed network applications.[1] He is currently on a sabbatical at Google.[2] Brewer received a BS in Electrical Engineering and Computer Science (EECS) from UC Berkeley where he was a member of the Pi Lambda Phi fraternity.[3] Later he earned an MS and PhD in EECS from MIT. In 1999, he was named to the MIT Technology Review TR100 as one of the top 100 innovators in the world under the age of 35.[4] Brewer is the 2009 recipient[5] of the ACM-Infosys Foundation Award in the Computing Sciences[6] "for his contributions to the design and development of highly scalable Internet services." In 2013, the ETH Zurich honored him with the title Dr. sc. tech.

World Community Grid - Accueil Brewer's CAP Theorem On Friday 4th June 1976, in a small upstairs room away from the main concert auditorium, the Sex Pistols kicked off their first gig at Manchester’s Lesser Free Trade Hall. There’s some confusion as to who exactly was there in the audience that night, partly because there was another concert just six weeks later, but mostly because it’s considered to be a gig that changed western music culture forever. So iconic and important has that appearance become that David Nolan wrote a book, I Swear I Was There: The Gig That Changed the World, investigating just whose claim to have been present was justified. Because the 4th of June is generally considered to be the genesis of punk rock6. We know three chords but you can only pick two The Sex Pistols had shown that barely-constrained fury was more important to their contemporaries than art-school structuralism, giving anyone with three chords and something to say permission to start a band. Brewer’s (CAP) Theorem The Significance of the Theorem

Osiris - Serverless Portal System Paxos (computer science) Consensus protocols are the basis for the state machine approach to distributed computing, as suggested by Leslie Lamport[2] and surveyed by Fred Schneider.[3] The state machine approach is a technique for converting an algorithm into a fault-tolerant, distributed implementation. Ad-hoc techniques may leave important cases of failures unresolved. The principled approach proposed by Lamport et al. ensures all cases are handled safely. The Paxos protocol was first published in 1989 and named after a fictional legislative consensus system used on the Paxos island in Greece.[4] It was later published as a journal article in 1998.[5] The Paxos family of protocols includes a spectrum of trade-offs between the number of processors, number of message delays before learning the agreed value, the activity level of individual participants, number of messages sent, and types of failures. The topic predates the protocol. Client Acceptor (Voters) Proposer Learner Leader Non-triviality Safety Liveness(C;L)

Difference Between Grid Computing and Distributed Computing Definition of Distributed Computing Distributed Computing is an environment in which a group of independent and geographically dispersed computer systems take part to solve a complex problem, each by solving a part of solution and then combining the result from all computers. These systems are loosely coupled systems coordinately working for a common goal. It can be defined as A computing system in which services are provided by a pool of computers collaborating over a network .A computing environment that may involve computers of differing architectures and data representation formats that share data and system resources. Definition of Grid Computing The Basic idea between Grid Computing is to utilize the ideal CPU cycles and storage of million of computer systems across a worldwide network function as a flexible, pervasive, and inexpensive accessible pool that could be harnessed by anyone who needs it, similar to the way power companies and their users share the electrical grid. 1. 2.

The network bites. Never forget it. by alexis Oct 6