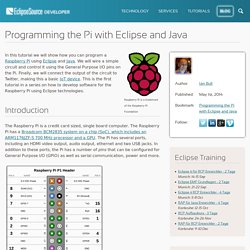 We will wire a simple circuit and control it using the General Purpose I/O pins on the Pi. Finally, we will connect the output of the circuit to Twitter, making this a basic IoT device. This is the first tutorial in a series on how to develop software for the Raspberry Pi using Eclipse technologies. Introduction The Raspberry Pi is a credit card sized, single board computer. Using the GPIO pins, the Pi can be used as a hardware controller; and with Java, you can use all the existing enterprise libraries and tools you’re familiar with. Setup For this tutorial you will need a Raspberry Pi with an up-to-date Operating System (may I suggest Raspbian), and Oracle Java 8 Installed. Finally, you will need Eclipse, EGit and m2e (plus Maven) to develop and build the software. Circuit In this tutorial we will use a very simple circuit. Software 1. 2. 3. 4. Is it possible to create an smtp client on Java ME 8.0?

Where's JavaFX in recent Java 8u33 for the ARM ? Thanks Chris, for your efforts and postings on the OpenJFX mailing list. 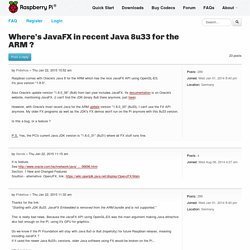 It's a sad situation Oracle has put us in. Judging from the Oracle guys' postings on the mailing list, it means that Java 8u0 and 8u6 always only partly supported FX on ARM machines (see missing media package), and Oracle officially drops FX entirely on the ARM machines starting with Java 8u33. So a complete Java8 including FX runs on desktop machines only -- but not completely on Ubuntu Linux 14 LTS, where the JavaFX's media package can't do video and audio codecs. And well, many use their Pi2 on the desktop, too. So the complete Java8 including FX does basically run on Windos only. 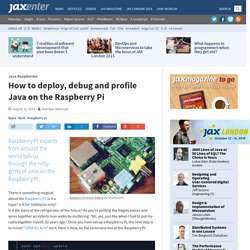 Is it a hype? Is it for hobbyists only? Is it the basis of the refrigerator of the future? As you’re putting the fidgety pieces and wires together an elderly man walks by muttering: “Ah, yes, just like when I had to put my radio together myself, 50 years ago.” Once you have set up a Raspberry Pi, the next step is to install “JDK8 for Arm” on it. Once you have done that, you need: Putty, WinSCP, SSH, and other command line tools, right?

You can simply register JDK 8 for ARM in NetBeans IDE (as shown above). James Gosling “After having spoken about the ‘Internet of Things’ for decades, I’m thrilled by the extent to which, for ordinary developers, this has been exploding beyond cell phones. Working with Java ME Embedded 8 by Using the Raspberry Pi Series. Configuring the Raspberry Pi as an Oracle Java ME Embedded Development Platform Intelligent devices are becoming an ever more important and ubiquitous part of our everyday lives. 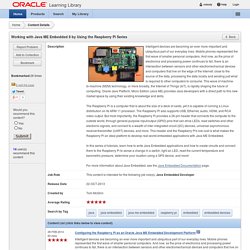 Mobile phones represented the first wave of smaller personal computers. And now, as the price of electronics and processing power continues to fall, there is an intersection between sensors and other electromechanical devices and computers that live on the edge of the Internet: close to the source of the data, processing the data locally and sending just what is required to other computers to consume. This wave of machine-to-machine (M2M) technology, or more broadly, the Internet of Things (IoT), is rapidly shaping the future of computing. 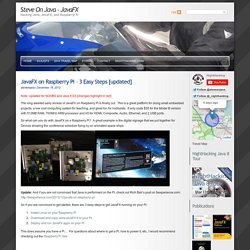 This is a great platform for doing small embedded projects, a low cost computing system for teaching, and great fun for hobbyists. It only costs $35 for the Model B version with 512MB RAM, 700MHz ARM processor and I/O for HDMI, Composite, Audio, Ethernet, and 2 USB ports. Netbeans, raspberry pi, pi4j and sudo. I am currently building a car - For the main display I am using a touch screen driven by a Raspberry Pi using JavaFX. 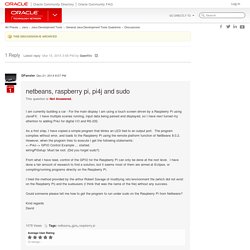 I have multiple scenes running, input data being parsed and displayed, so I have next turned my attention to adding PI4J for digital I/O and RS-232. As a first step, I have copied a simple program that blinks an LED tied to an output port. The program compiles without error, and loads to the Raspberry Pi using the remote platform function of NetBeans 8.0.2. 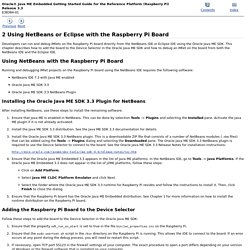 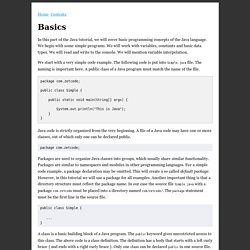 We begin with some simple programs. We will work with variables, constants and basic data types. GUI Programming - Java Programming Tutorial. 1. 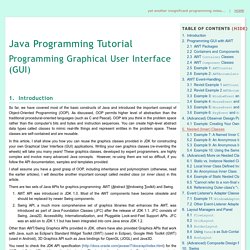 Introduction So far, we have covered most of the basic constructs of Java and introduced the important concept of Object-Oriented Programming (OOP). As discussed, OOP permits higher level of abstraction than the traditional procedural-oriented languages (such as C and Pascal). Event Handling. What is an Event? 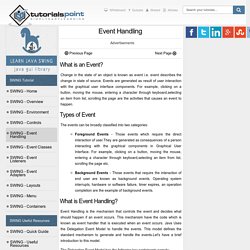 Change in the state of an object is known as event i.e. event describes the change in state of source. Events are generated as result of user interaction with the graphical user interface components. Java Swing tutorial. This is a Java Swing tutorial. The Java Swing tutorial is suited for beginners and intermediate Swing developers. After reading this tutorial, you will be able to develop non-trivial Java Swing applications. Table of contents Swing. Gpio - Running a JAR file in Pi results in following error "can't find the main class" Current community your communities Sign up or log in to customize your list. more stack exchange communities Stack Exchange. The Pi4J Project - Installation. The following installation instructions are provided to install, upgrade, and uninstall the Pi4J libraries, examples, utility scripts, etc. directly on your Rasbperry Pi.

These instructions are not intended to install Pi4J on your development workstation or other computer. For development conducted on a computer other than the Raspberry Pi, please access the Pi4J JAR dependencies via the Maven repository or download them directly and reference them in your project. Prerequisites Java Runtime (JRE/JDK) If you are using a recent build of Raspbian, then an Oracle Java runtime environment is pre-installed. If you are using an older Raspbian build that does not already include a Java runtime environment, please see the following article for a complete set of installation instructions for installing the Oracle JDK. The Pi4J Project - Home.