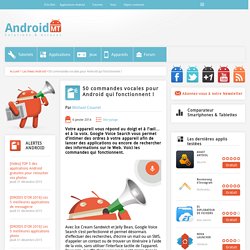 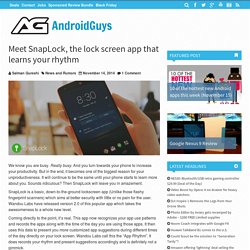 Really busy. And you turn towards your phone to increase your productivity. But in the end, it becomes one of the biggest reason for your unproductiveness. It will continue to be the same until your phone starts to learn more about you. Sounds ridiculous? SnapLock is a basic, down-to-the-ground lockscreen app (Unlike those flashy fingerprint scanners) which aims at better security with little or no pain for the user. Coming directly to the point, it’s real. Beginners guide to Tasker. Tasker is one of those apps that is so powerful, where the possibilities are endless, if you’re using it right. 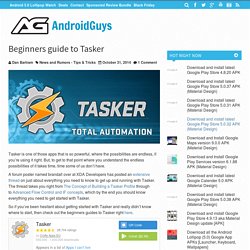 But, to get to that point where you understand the endless possibilities of it takes time, time some of us don’t have. Run Apps In Split-Screen View & Switch From Sidebar. One of the most interesting features Samsung introduced with Galaxy S4 and Note 3 phones was MultiWindow Flashbar which enables using two apps simultaneously in split view mode. 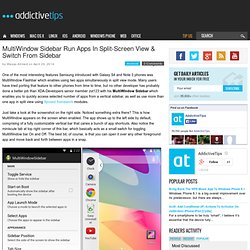 Many users have tried porting that feature to other phones from time to time, but no other developer has probably done a better job than XDA-Developers senior member zst123 with his MultiWindow Sidebar which enables you to quickly access selected number of apps from a vertical sidebar, as well as use more than one app in split view using Xposed framework modules. Just take a look at the screenshot on the right side. Noticed something extra there? This is how MultiWindow appears on the screen when enabled.

The app shows up to the left side by default, comprising of a fully customizable vertical bar that caries a bunch of app shortcuts. The usage of MultiWindow Sidebar is dead simple. AlarmPad: Customizable Context-Based Alarm Clock App For Android. Every once in a while, we come across an app that blows us away with its exquisite design, comprehensiveness or unique functionality. 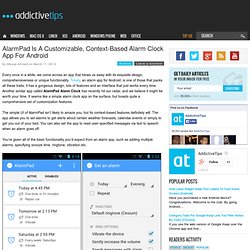 Timely, an alarm app for Android, is one of those that packs all these traits; it has a gorgeous design, lots of features and an interface that just works every time. Another similar app called AlarmPad Alarm Clock has recently hit our radar, and we believe it might be worth your time. It seems like a simple alarm clock app on the surface, but boasts quite a comprehensive set of customization features. The simple UI of AlarmPad isn’t likely to amaze you, but its context-based features definitely will. The app allows you to set alarms to get alerts about certain weather forecasts, calendar events or simply to get you out of your bed. You’re given all of the basic functionality you’d expect from an alarm app, such as adding multiple alarms, specifying snooze time, ringtone, vibration etc. Glextor App Manager Organizer - launcher automatically group apps. By Antonio Wells Feb 3, 2014 2:44 PM – Install Glextor App Manager Organizer aims to replace your normal app drawer by offering more organization features by grouping similar app categories. 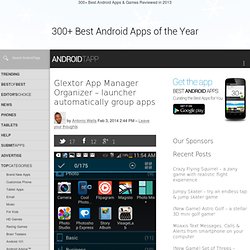 Price: Free, $2.99. Automated Device rules engine gives your device a small brain of its own. Android power users will probably be familiar with a couple of automation apps that lets your smarpthone or tablet automatically change some settings whenever certain conditions are met. 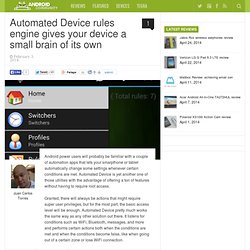 Automated Device is yet another one of those utilities with the advantage of offering a ton of features without having to require root access. Granted, there will always be actions that might require super user privileges, but for the most part, the basic access level will be enough. Automated Device pretty much works the same way as any other solution out there. It listens for conditions such as WiFi, Bluetooth, messages, and more and performs certain actions both when the conditions are met and when the conditions become false, like when going out of a certain zone or lose WiFi connection. Automate Switching Between Custom Profiles On Android With TF Profile. Remember those old phones that used to come with multiple built-in profiles? 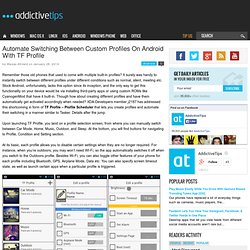 It surely was handy to instantly switch between different profiles under different conditions such as normal, silent, meeting etc. Stock Android, unfortunately, lacks this option since its inception, and the only way to get this functionality on your device would be via installing third-party apps or using custom ROMs like CyanogenMod that have it built-in. Scroll To Top Or Bottom Of Any Screen On Android By Tapping The Status Bar. Many of us now find it more convenient to browse the internet on our smartphones or tablets than on PC. 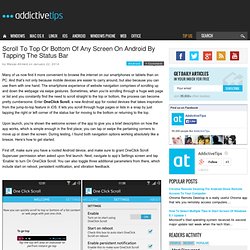 And that’s not only because mobile devices are easier to carry around, but also because you can use them with one hand. The smartphone experience of website navigation comprises of scrolling up and down the webpage via swipe gestures. Sometimes, when you’re scrolling through a huge web page or list and you constantly find the need to scroll straight to the top or bottom, the process can become pretty cumbersome. Enter OneClick Scroll, a new Android app for rooted devices that takes inspiration from the jump-to-top feature in iOS. It lets you scroll through huge pages or lists in a snap by just tapping the right or left corner of the status bar for moving to the bottom or returning to the top. First off, make sure you have a rooted Android device, and make sure to grant OneClick Scroll Superuser permission when asked upon first launch.