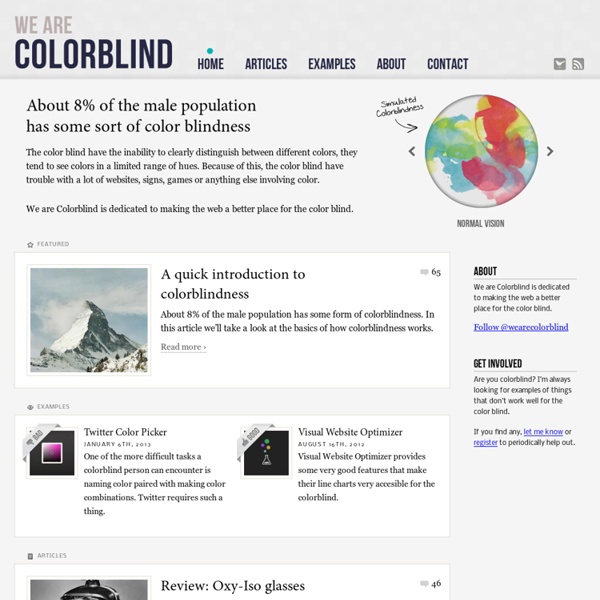 tintypes on the Behance Network I have a tintype portrait studio called Photobooth, on Valencia Street in San Francisco. Over the past year, I've had about 3500 people come through the door, sit in front of the camera and have their portrait made. Some of them came looking for me and some just wandered in and asked what we were doing there. Full text: An epic Bill Gates e-mail rant Sometimes, software isn’t so magical. Even for Bill Gates. For the opening piece in our series on Gates leaving daily life at Microsoft, one goal was to give a clear picture of the Microsoft co-founder’s role inside the company, as a gauge of the impact his departure will have. As part of that, I went back through the internal e-mails turned over in the antitrust suits against the company, looking for new insights into his personality. Read on past the jump for one of the gems that turned up, showing Gates in the role of chief rabble-rouser. (Original document: PDF, 5 pages.)

5-Step Guide to Optimizing Landing Pages The most effective way to boost lead generation is to improve the performance of your landing pages . So, how do you do that? While we keep advising marketers to test with their specific audiences, there are actually a few best practices you should take into consideration. In fact, the folks at MECLABS came up with a formula to create top-performing landing pages. Here, C stands for Conversion , M is Motivation , V is Value Proposition, I is Incentive , F stands for Friction , and A means Anxiety . If you had to break down this formula into a quick guide for building successful landing pages , here is how it might look:

Shameless Stealing of Other People's Work - 日志 - Tyler - 个人中心_Confucius Institute Online Credit where credit is due: I think I'm the scholar, but I don't wear glasses. The funny thing is, I could put at least one 汉语桥选手 in each category! The Playa' Parents Nouveau Riche Toki Tori Review for iPhone Two Tribes' long awaited iPhone version of Toki Tori [$4.99] has finally arrived in the App Store tonight. The game was originally released for the Gameboy Color back in 2001 and has since been updated for the Wii and now the iPhone (published by Chillingo). Toki Tori is a puzzle platformer in which you control the actions of a cute chick across 80 levels. The goal of each level is for Toki Tori to free his siblings who have been mysteriously kidnapped.

Assessing Your Team's UX Skills By Jared M. Spool Originally published: Dec 10, 2007 Blog - Page 1 - King Brown King brown Launch in NYC Posted by: Cleo on the 4th of December, 2015, 1 comment Posted in: kingbrown, launch, new york city It's going down, December 18 & 19 in New York City! Go With The Flow: Product Planner Maps Out How The Web’s Most Po When it comes to building a website, one of the key factors in establishing a sizable user base is your site’s ability to ‘go viral’. While there isn’t any magic secret to accomplishing this, there are a few things that can help – namely, making it as easy as possible for your users to sign up, and helping them invite their friends. But this is easier said than done, and determining exactly how to implement these seemingly obvious steps can play a huge role in a site’s success.

Dedicated to making the web a better place for the color blind. 108 Million Web Users Are Color Blind. by angelahoatwork Mar 26