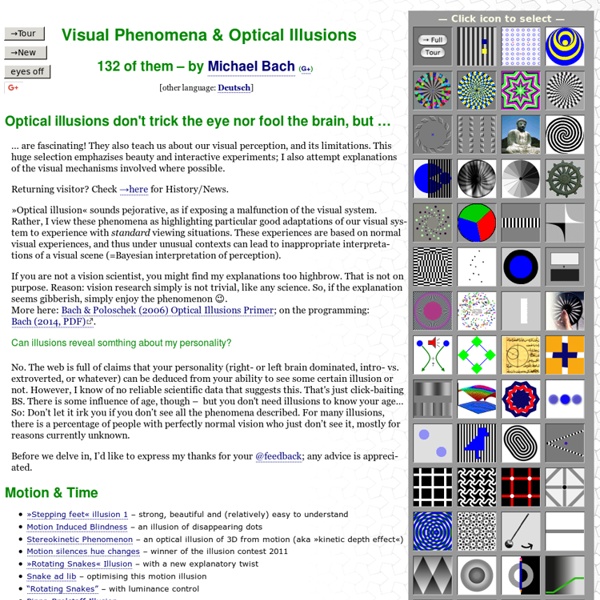 Impossible Triangle - The Illusions Index The Impossible Triangle (also known as the Penrose Triangle or the Impossible Tribar) was first created by Oscar Reutersvärd (1915 - 2002), a Swedish graphic artist known as the ‘father of the impossible figure’. It is anecdotally, but widely reported that he created it in 1934, aged 18 while doodling as a student in his Latin class. The illusion was independently discovered later and popularised by Lionel Sharples Penrose (1898 -1972), a British psychiatrist, geneticist, and mathematician, and his son Sir Roger Penrose (1931 -), a British mathematician, physicist and philosopher of science. Penrose and Penrose published the illusion in the British Journal of Psychology in 1958.

Optical Illusions. An optical illusion which is also called a visual illusion can be described as perception of the images differently than they actually are. Our eyes see something, pass this info to the brain, and because of the different reasons and factors our brain makes us think that we see something different. Since I’m not a doctor myself and can’t write scientific explanations (though I do understand how it works) I use the material explaining the origin of illusions from Wikipedia. Most of the illusions were discovered by psychologists and later people started using these effects to create new illusions. There are basically several main effects on a human eye and brain and multiple variations of the visual presentation of these effects.

Ebbinghaus Illusion - The Illusions Index Crane, T., and French, C., 2016. The Problem of Perception. In: Zalta, E. N., ed. The Stanford Encyclopedia of Philosophy. Geek Overcomes Social Anxiety By Turning Life into RPG Gainesville, FL - Area geek Ross Davis has learned to overcome his long-standing social anxiety by turning his life into a Role-Playing Game (RPG). RPG systems such as D&D and GURPS have been part of the geek culture for decades, but they have traditionally served to further cement their participants into Loserdom. With the advent of computerized RPGs such as Neverwinter Nights and the Final Fantasy series, geeks have been able to further socially isolate themselves. Davis claims that his revolutionary application of RPGs can increase a geek's social skill by several levels and result in the accomplishment of new social feats.

NLII Mapping the Learning Space: Teaching Practices for Higher Education A multitude of factors have come together in rapid progression to change the way higher education approaches the classroom, teaching and learning. No better background on these changes can be found than in the Association of American Colleges and Universities' (AAC&U) panel report Great Expectations: A New Vision for Learning as a Nation Goes to College. Technology is rapidly changing what we call a course. Freehand HDR Imaging of Moving Scenes with Simultaneous Resolution Enhancement - Mathematical Image Analysis Group, Saarland University Limitations of our Alignment Method This page shows scenarios where our proposed optic flow-based alignment strategy does not produce agreeable results. As mentioned in the paper, optic flow approaches that rely on a coarse-to-fine warping strategy for handling large displacements fail to estimate large displacements of small objects. This is due to the fact that small objects vanish at coarse levels where their large displacement would have need to be estimated. Trying to adapt existing or find novel strategies for the solution of this problem is part of our ongoing research.

Optical Illusions, Videos, Images, Brain Teasers and more! Good Morning and Happy Monday to everyone! Hope the weekend was good and you had a Happy Father’s Day! Today’s optical illusion is remarkable one because it is going to force anyone that sees it to really look at it and use their imagination! So, what do you all see because you are supposed to see a Native American sitting on a horse right next to his village, and there is a beautiful rainbow overhead, which really adds something to the picture. However, that is not all that people are going to see, and their eyes and brain are immediately going to take this picture and start seeing other things in it. In pictures: Crazy cycle lanes We asked for photos of bizarre bike lanes. Peter Owens, who runs Warrington Cycle Campaign's tongue-in-cheek Facility of the Month site, says this is a personal favourite. Richard Lewis, of Middleborough, says: "The cyclist is on the road where motorists can see him, not the cycle lane where he'd have to give way to trees." Cyclists at Vauxhall roundabout are often brought up short by motorbikes from the shop on the corner, says Rob Ainsley. Daniel Clarke throws a footpath into the mix: "Here in Atlanta, pavements just stop and us pedestrians are forced to step into the road for a few yards before the pavement continues."

&quot;Comer&quot; Schools: Revealing the Fraud of NCLB If we as citizens truly want a better bang for our educational buck, not to mention a stronger civic body, more integrated communities and a healthier overall populace, we would be wise to understand what Comer and others like him are saying is needed in America's schools. The basic thrust of Comer's educational program, and he has been operating it in two schools in New Haven since the late 1960s, is that education is as much about child development as it is imparting academic skills and knowledge. The gap between the support for development that children need and that which society provides, more than anything else, lies at the root of most school problems I believe Comer would say child development is a more important overall goal than mastery of facts and figures and dates. In this, he cites "the public good" from the pre-amble of the Constitution, which was the basic argument used to establish public education.