Best Illusion of the Year Contest 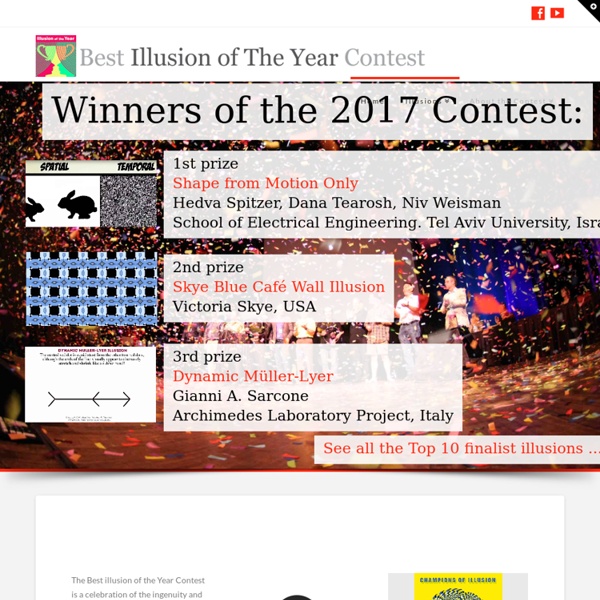 Popular Science | New Technology, Science News, The Future Now At the nuvera fuel cells lab in Cambridge, Massachusetts, 25-year-old chemical engineer Darryl Pollica stands in front of a prototype 5-kilowatt fuel cell -- a miniature powerplant that can make most of the electricity needed by a family of four. Its metal skin has been removed to reveal a cubical frame about 5 feet on each side, packed with tanks, valves, and electronics. Conspicuously taped to the outside of the frame is a Nokia cellphone. "That's our mascot," Pollica says. "We want to shrink this," he says, opening his arms as if to embrace the entire assembly, "to this," and he brings them together and points toward the tiny phone. Pollica's boss, Nuvera Chief Operating Officer Jeff Bentley, a 25-year veteran of the difficult effort to create cost-effective fuel cells that are relatively small, is a bit more cautious. "We're optimists," Pollica shoots back with a confident smile. They better be. Nothing happened. But before we get there, the matter of cost has to be resolved.

No More Thumbprints Researchers have made materials that repel oil and are able to clean themselves without the help of soap and water. What’s more, the researchers describe exactly how the materials work, which could help others design similar materials. This could lead to a range of applications, including fingerprint-shedding cell-phone displays. The researchers, from MIT and the Air Force Research Laboratory at Edwards Air Force Base, in CA, describe their results in the current issue of Science. Making super oil-repellant materials has been one of the great challenges in materials science, says Jeffery Youngblood, a professor of materials engineering at Purdue University, who was not involved in the research. “Before now, superoleophobic materials have been a pipe dream,” Youngblood says. The MIT and Air Force Research Laboratory researchers overcame the obstacles to super oil-repellant materials by combining two advances. But the chemistry of the material isn’t enough to make it super oil repellant.

Foreign Policy - the global magazine of economics, politics, and ideas In the war on truth, honest reporting matters. Sign up for an FP Premium subscription today for the best fact-based source for breaking news, analysis, and insights into the most pressing stories of the day, all for about a quarter a day! international science film festival - Pariscience on iPhone and Android ! For the 8th edition of the International Science Film Festival Pariscience, we chose an artistic and scientific picture from Jacques Houvault. More info about the photographer here. Thank you very much for submitting your films, the results will be announced on the end of July ! Watch the virtual press conference of the 8th edition of Pariscience International Film Festival ! Pariscience Film Festival is looking for high and middle school classes for its Jury ! Submit your film now! The Grand Jury, chaired by Cedric Villani, awarded the four prizes of the competition. Have a look at the school programme ! Scientists, authors, directors, journalists... The PARISCIENCE team is very pleased to announce the official competition and the jury members of its 8th edition Free screenings on a giant screen! The festival takes place in a very special location: the Paris Museum of Natural History in the Jardin des Plantes.

Design | Designcollector™ SEED – The near-future of mobile technology The year 2014 is the last break point on the way to omni-channel digital world were device is no more a single way to communicate with information and data. Here is a new… Shape – A Film About Design Presented by Pivot Dublin and Dublin City Council and directed by Johnny Kelly a short film “Shape” is a project to get young people thinking about how the world is made around them… Sponsor: Mujjo iPhone Leather Wallet Case It’s getting warmer and warmer, spring is just around the corner and every bit of nature will get a new skin as soon as it goes. Greg Papove Greg Papove is a designer based in Vancouver, British Columbia who works on a different urban and home project with a great sense of humour and humanity IKEA PS Collection 2014 I post this just because it flows my way of mobile living and contemporary furniture design. Smartwatch Concept GM Concept UI by GMUNK Vespa Cam What a Roman Holiday without noisy Italian scooter and shiny gloss helmets?

by @robfitz - Tools and guidance for confused founders In my first company, I tried to act extroverted, because I thought that’s what good leaders did. It was exhausting and counter-productive. I’ve found a more comfortable way of working and wanted to share a few thoughts and resources that have been helpful to me. The back-thumping, rapport-building, steak-and-strippers salesman is just one of several styles, and it’s not even the most effective. In fact, it tends to be actively harmful if you’re developing long-term relationships (like in large sales, long-term partnerships, and fund-raising). The turning point for me was realising that it’s okay not to have all the answers. And finally, not all sales is created equal. I like YC’s attitude on pitching to investors: it doesn’t matter how awkward you are, as long as your startup is good enough. The one point I wanted to make before we get started is, we actually don’t spent a lot of time at YC focusing on this. Having an office is probably my least favourite part of having a company.